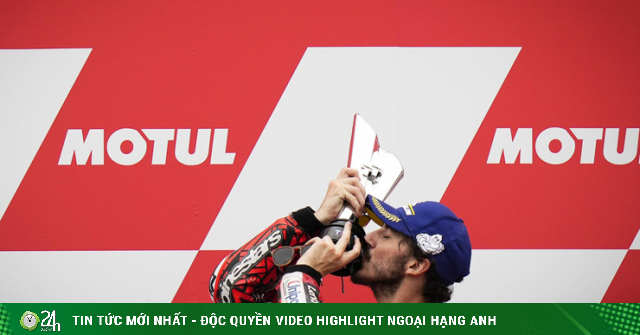 (Sports news, MotoGP news) The Assen racetrack, the Netherlands, which is known as the “speed temple” of world moto racing, is a place where all riders want to win. Many surprises happened in the racing modes and the distance on the individual rankings has been shortened, leading to the exciting phase 2 ahead.

MotoE: Aegerter is close to the championship

The reigning runner-up Dominique Aegerter continued her high form in the 2022 season with a 3rd win and 6th podium at Race 1 in Assen, defeating Eric Granado and Mattia Casadei with just 0.082s between the top 3.

Podium Race 2 from left to right: Aegerter, Granado and Casadei

Race 2 only took place until round 4/6 when an accident at crab 5 caused a red flag to appear (the drivers were all healthy). That makes BTC decide to end early, calculate the achievement after round 3 and half the maximum score. Granado got their first win since the double at Jerez and cemented P2 in the standings, with Aegerter and Casadei being the two remaining drivers to take the podium.

Moto3: Sasaki standing on top of podium for the first time

Ayumu Sasaki won the pole in Moto3 for the second time (after the German GP 2019) and is still on the way to find the first victory. However, Izan Guevara, the young driver who has been in very high form recently, is the one who comes out from the third in the first rounds. But Sasaki and Tatsuki Suzuki didn’t let Guevara have another easy race. 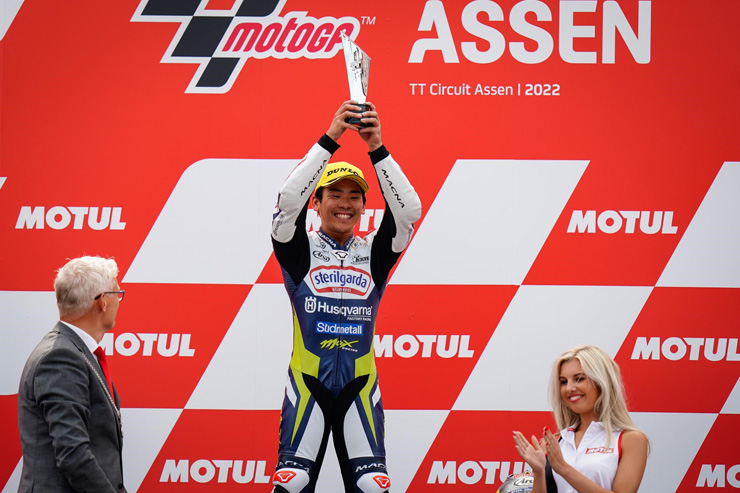 Sasaki got her first win

Behind, Suzuki’s teammate Dennis Foggia had another difficult race and finished with the 3rd DNF in the last 4 races. Stepping to the final round, there are 3 names David Munoz, Jaume Masia and “veteran” John McPhee competing for podium. However, due to a mistake, all 3 missed an unfortunate opportunity and indirectly helped Guevara win 1 more podium this season (P2).

He overtook Suzuki to finish 2nd while Sergio Garcia, who only started 18th and never ran in the top 5 at any time, was surprised to finish 3rd, only 0.007s faster than Suzuki. As for Sasaki, the Japanese driver finally got his first victory on the legendary Assen racetrack after 94 races at Moto3.

With this result, Garcia still leads the individual rankings, but the gap with teammate Guevara is only 3 points.

Jack Dixon has the second pole this season, but the British driver is still not brave enough on Sunday to convert to victory. He let teammates Albert Arenas and Augusto Fernandez pass from the early rounds, respectively. The champion driver 7 days ago, A.Fernandez maintained his high form and added a class performance when leading 8 decisive rounds to win the 3rd out of 5 races and co-led the individual rankings when Entering summer vacation 2022. 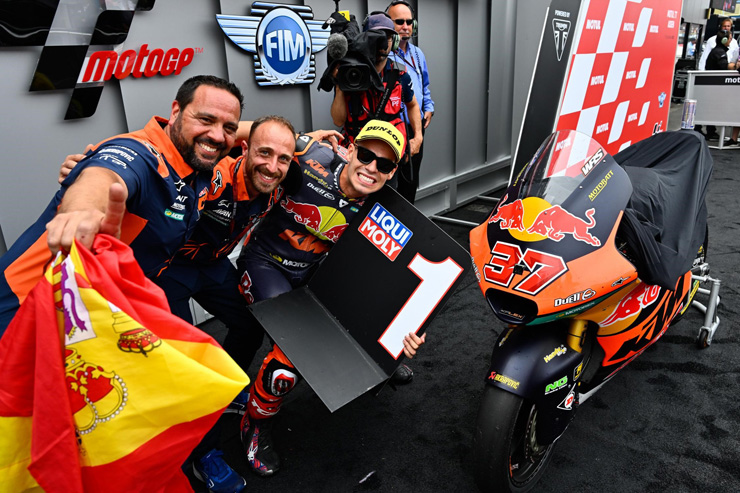 A.Fernandez has the 2nd win in a row, rising to the top of the chart

Ai Ogura had a “nightmare” start when he dropped to P16 and almost had to leave the race. But driver #79 had an impressive comeback, making good use of the opponent’s mistakes to finish 2nd overall, only to lose to A.Fernandez. Dixon from the pole to the 3rd finish (2nd podium) and Celestino Vietti managed to finish 4th, just 0.033s away from the podium. This result made Vietti equal in score by A.Fernandez while Ogura lost only 1 point behind after stage 11.

Francesco Bagnaia once again showed her class in the qualifying run with the 4th pole in the last 6 races. However, Fabio Quartararo continued to stick to P2, aiming for a 3rd win in a row.

Quartararo approached the race aggressively when he wanted to attack his opponent from the first corner, but had to spread the price because the corner was too wide and let Aleix Espargaro and Jorge Martin pass. The defending champion tried to regain 2nd place after 2 turns but failed, accepting 3rd place after round 1. 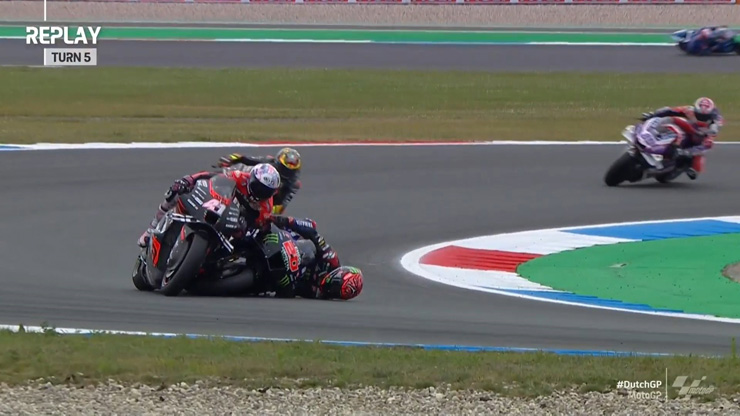 The mistake of the defending champion in round 5

The disturbance behind gives Bagnaia a 0.9s gap with the chasing group. A. Espargaro and Quartararo tried to close the gap with Ducati handlebars, but fans witnessed a rare mistake from Monster Yamaha’s handlebars.

At the fifth round of the fifth round, Quartararo had the second situation to attack the opponent, but his impatience caused him to lose control by turning too fast, and then collided with A.Espargaro’s car causing him to slide off the track. .

Aprilia was able to resume racing but driver #41 fell to 15th. Quartararo was able to continue racing but he had a 2nd crash 5 laps later to leave Assen with no score. . That makes A.Espargaro even more determined to score as many points as possible and his car is good enough to take on this challenge. 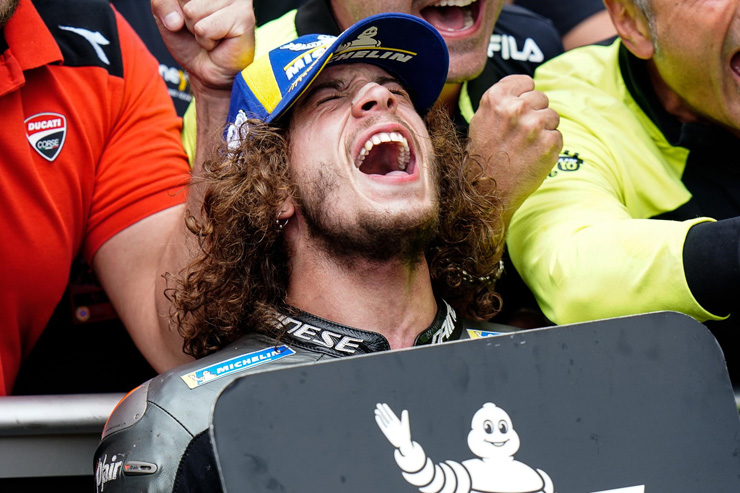 The absence of a main opponent makes Bagnaia’s path to victory more open than ever. Although a little rain fell when the race was 9 laps, it did not affect the riders too much. Bagnaia still kept the “cold head” to preserve the advantage and went to the final victory after 26 laps.

The third victory in 2022 brings Ducati’s #63 steering wheel back to the top 4 on the individual rankings. This is also Ducati’s first win since Casey Stoner in 2008.

Marco Bezzecchi started 4th, was in consistent form throughout and took advantage of his opportunity to get his first MotoGP podium, also the first podium for Valentino Rossi’s Mooney VR46. The third place was another surprise, Maverick Vinales from 11th place had the first podium with the new team, Aprilia. 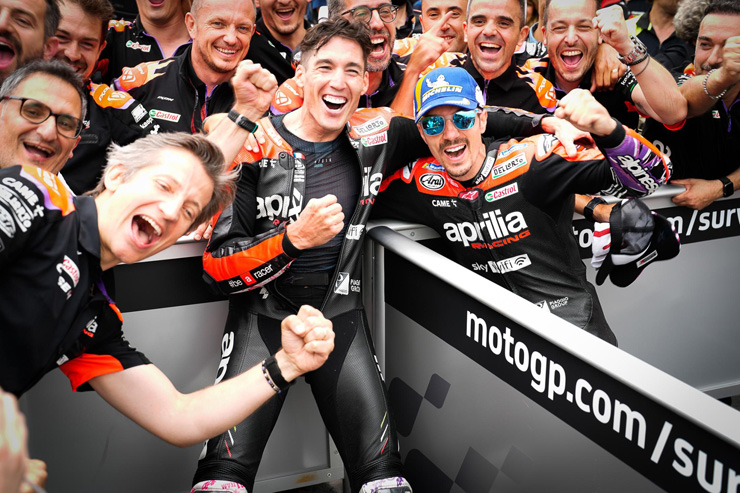 Aprilia has a successful race in Assen

The Italian team had a full race weekend when A.Espargaro made a spectacular final turn against Brad Binder and Jack Miller to take 4th place after colliding with Quartararo early in the race. Thus, after 11 stages, entering the mid-season break, Quartararo has a 21-point advantage over A.Espargaro on the individual rankings, not a big difference. 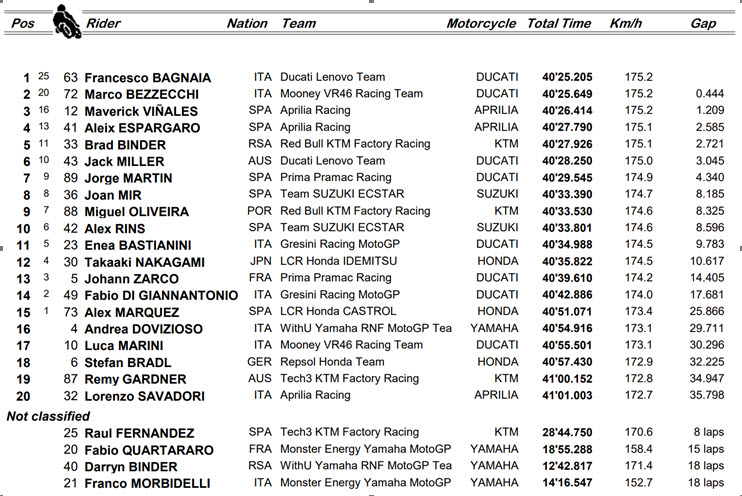 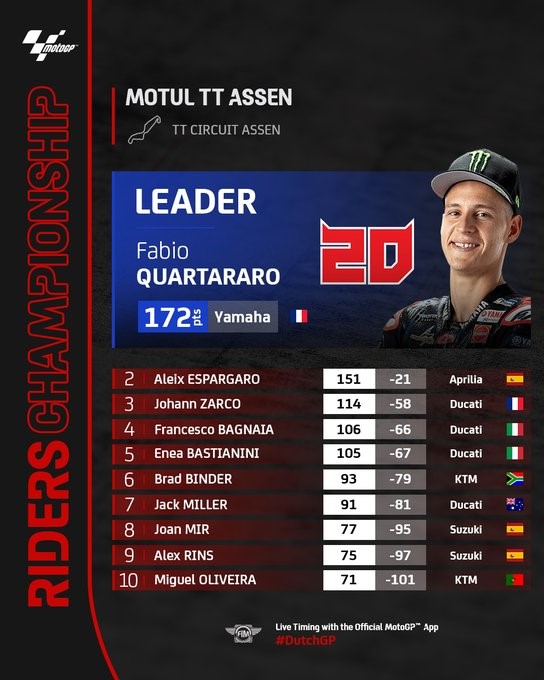 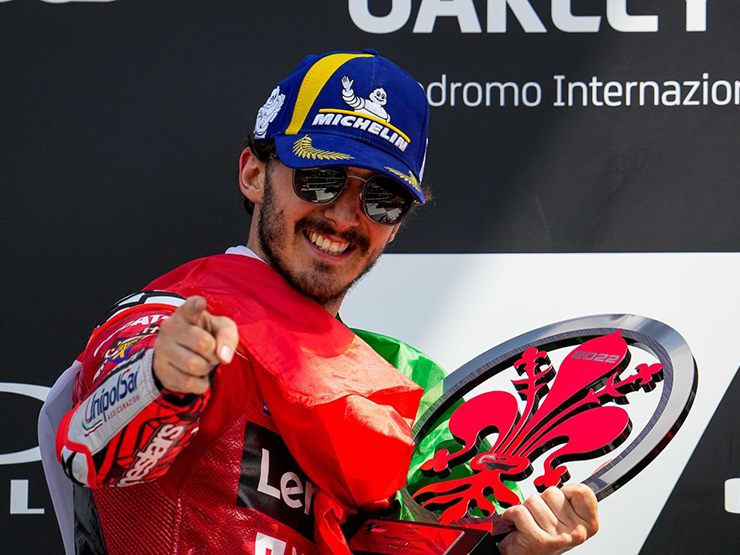 (Sports news, racing news) Mugello racetrack is the venue for the 8th race of the 2022 season and fans in Italy expect the host drivers to have the best results…