(Sports news, MotoGP racing news) Aragon racetrack welcomes the return of Maverick Vinales in a new color, but the audience feels even more excited when a legend returns with a “two-horse” confrontation. level, in the end Ducati’s young driver won the first emotional victory.

Darryn Binder won the third pole of his career, the first time since the opening stage in Qatar. However, the experience of the South African driver did not show as he dropped quickly in the race and was unlikely to win or podium this stage.

The turning point happened in round 16/19, when rookie was leading the individual rankings, Pedro Acosta made a serious mistake and he dragged his compatriot Xavier Artigas into an accident that caused both to give up when have a chance to win podium.

Given the “golden” opportunity, Sergio Garcia is determined to have a good record to shorten the gap with the opponent. But it was he who “throws away” important points when he made a mistake in the final round and went empty-handed at Aragon.

At the top, Dennis Foggia once again showed his class, although he only started 14th but he got another victory with a pass in the last corners. This is the 3rd victory of the season and the 6th podium in the last 8 races, which helps the Italian driver return to the top 3 of the individual rankings.

Deniz Oncu took the lead for most of the race but was inexperienced at the decisive moment, so he had to accept with 2nd place, 2nd podium in 3 races. Ayumu Sasaki finished third for his second career podium in his second race in a row at Aragon in 12 months.

An excellent lap brought back the 6th pole and the 9th top 3 start in 2021 for Sam Lowes, but his problem is that he has not yet converted that advantage into the main race. 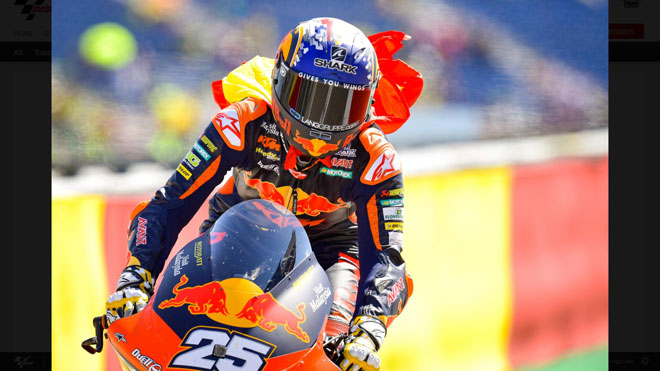 R.Fernandez had 5 wins in the Moto2 rookie season

Lowes had a good departure to create a gap of nearly 0.7s in the first round, but the Red Bull KTM duo (Remy Gardner and Raul Fernandez) shortened quickly in the next round, even R.Fernandez did took the lead in round 4. Rookie #25 created a safe distance in the following rounds while teammate Gardner could not keep up with the two cars above and accepted to be 3rd.

The championship battle continued to see big changes in the game when Marco Bezzecchi and Sam Lowes took turns making mistakes and giving up in this race. That helps R.Fernandez easily go to the 5th victory this season (the first Moto2 rookie since Marc Marquez 2011 to have 5 victories).

However, he could not close the score gap significantly because Gardner had 10th podium with 2nd place, and this season’s 5th 1-2 victory for Red Bull KTM, helping the team to win the championship early in the season. 2021.

While the final podium place was a fierce competition between Jorge Navarro and Augusto Fernandez; In the end, the driver #37 A.Fernandez won and got the 4th podium in the last 5 races.

MotoGP: First win for bike #63 after classic fight with Marquez 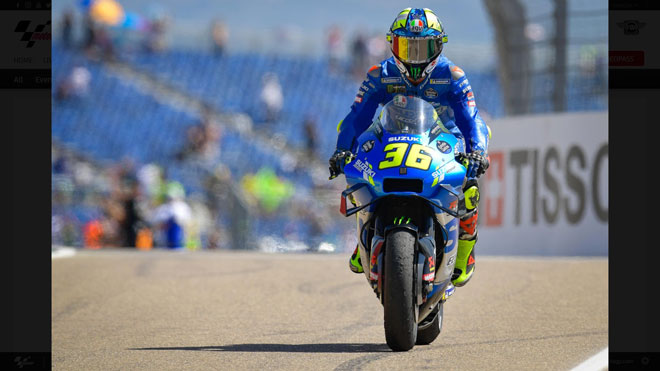 The defending champion Mir has 1 more podium with position P3

Francesco Bagnaia won the first pole since the start of the season in Qatar while teammate Jack Miller finished second, and Fabio Quartararo finished third.

However, this is not a strong race for Yamaha, so the driver who is leading the individual rankings has “go backwards” after starting. He fell to 7th place just after the first round. Above, Bagnaia had a good departure to maintain the advantage, and Marc Marquez started well to rise to second, with the determination to win at Aragon. Following Honda’s #93 car are Miller, Aleix Espargaro and Joan Mir.

Quartararo not only could not shorten the gap with the top, but also was pressured and attacked by the opponents behind. He ended up finishing in 8th place with great difficulty. Bagnaia and Marquez took the lead and put it on a different level from the rest as they made the race their own.

In the back, Miller continued to show his instability when he made a mistake and let A.Espargaro and Mir pass, no longer having a chance to return to the top 3 in this stage.

The two #63 and #93 chased each other until the last laps, when Marquez was too experienced, and Bagnaia was still hungry for the first MotoGP victory. Marquez had a total of 7 attacks on the opponent entering the last 3 rounds, but Bagnaia kept his “cold head”.

Ducati riders forced Marquez to take risks and made a mistake in 12 decisions, giving Bagnaia an emotional first victory in two and a half years in MotoGP format.

The first victory for him personally and for Ducati was the first time at Aragon since 2010 (Casey Stoner) that helped him return to 2nd place in the individual rankings and shorten the gap with Quartararo. Marquez had a stellar performance to get the 2nd podium of the season, and Mir won the 5th podium in 2021 with 3rd place.

A.Espargaro and Miller placed 4th and 5th respectively, while rookie Enea Bastianini took the best place of his career with 6th. Maverick Vinales returned to MotoGP in Aprilia and he finished 18th ahead of his teammate. ex Valentino Rossi and Luca Marini.

Stage 14 of 2021 – San Marino GP will take place this weekend at the Misano – Marco Simoncelli racetrack. 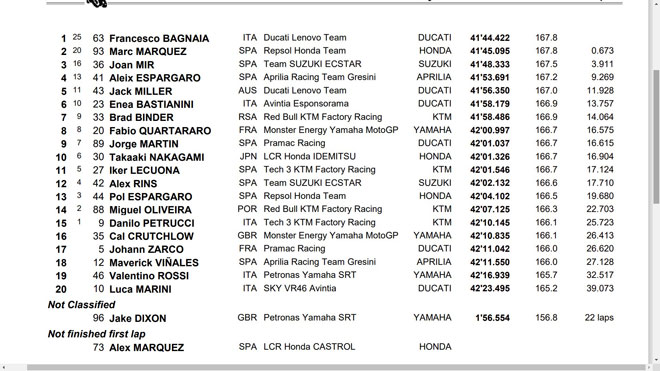 Yamaha hasn’t won at Silverstone since 2015’s Valentino Rossi, but with a car of all-round power,…