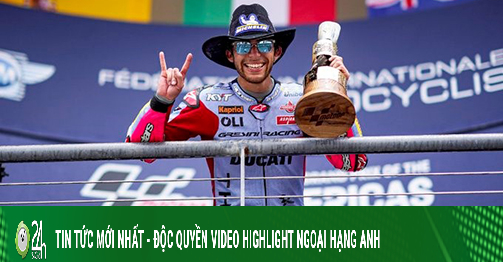 (Sports news – racing news) The second and final race in the Americas within the framework of MotoGP 2022 takes place at COTA racecourse, USA on the occasion of the 500th anniversary of the MotoGP format.

Andrea Migno won the first pole since the French GP in 2021 at Le Mans circuit, while Dennis Foggia started second – losing only 0.067s, promising an attractive competitive race for the overall victory. However, both started poorly and let other opponents pass from the beginning. Even in the first 5 rounds, there were times when both Migno and Foggia fell to 10th.

Moto3: Masia ends the “term” of victory, Foggia temporarily leads to the score

The joy of victory returns to Masia

After that, the two Italian drivers were calm to return to the top in the next rounds. But the most prominent name in the race must be Jaume Masia, the driver of KTM is in erratic form. He started 5th and fell to 15th in round 2, but had been in the top 3 since round 7 and finally had a decisive strike to overtake Migno and take his first overall win since. Qatar 2021.

Migno risked in the last corners to regain the 1st position but failed and even let Foggia overtake the 2nd place, accepting with podium – P3. With Sergio Garcia having an accident and empty-handed at COTA, Foggia rose to the top of the rankings with a 16-point advantage, while Migno and Masia ranked 3rd and 6th respectively.

Moto2: Champion candidate “falls down”, Arbolino has his first win Podium at Moto2 from left to right: Ogura, Arbolino and Dixon

Host driver, Cameron Beaubier had a memorable 7th day when he won pole in the 36th race at MotoGP, with a difference of 0.34s compared to the 2nd place. will definitely want to achieve a high position for the home audience. Beaubier had a relatively good race and ran most of the time in the top 6. However, he made an unfortunate mistake in the final lap, placing 4th and losing everything in this race.

Starting behind Beaubier are 3 championship candidates, Celestino Vietti, Aron Canet and Tony Arbolino. All three soon took the lead but in laps 5 and 8, respectively, Vietti and Canet made mistakes and were eliminated from the race. Since then, Arbolino has mastered the race and went to the first victory at Moto2 (after 22 starts) easily with a gap of nearly 3.5 seconds compared to the 2nd place, Ai Ogura.

The Japanese driver also had a good performance from P11 to start and finish 2nd overall. Thanks to that, he rose to 2nd place on the individual chart, followed by Jake Dixon (UK) with the first podium since the Moto2 debut in 2017.

Ducati was in the spotlight on Saturday as their five bikes took the top five spots, with Jorge Martin continuing his impressive streak with second pole of the year and a new record at COTA – 2 minutes 02,039s.

Miller was the best starter and took the lead, pushing Martin down to second, followed closely by Enea Bastianini on the last Ducati in the top five. Fabio Quartararo started at 6th, rising to P5 in the first round, but that is the best he can do this stage. Marquez started P9 but “challenged” himself when he dropped to P18 in only the first 5.5km. 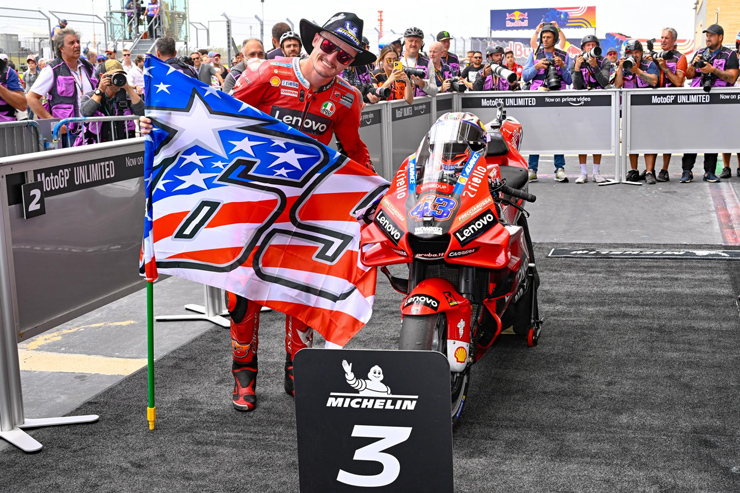 During the first half of the race, the drivers ran cautiously to keep the tyres so there wasn’t too much disturbance. By lap 11, Miller started picking up speed with his best lap since the start of the race, leaving Martin lagging behind. So Bastianini was forced to run faster, he overtook Martin to continue to close the Australian steering wheel.

On Martin’s side, the driver #89 could not keep the previous speed and gradually fell behind, finally only finishing 8th.

After 4 laps of 2nd place, Bastianini attacked Miller and rose to 1st place in round 16, when the race was only 5 laps away from the end. Behind, the Suzuki duo as usual had breakthroughs in the last moment, Alex Rins and Joan Mir respectively entered the top 4 and had hopes of a higher ranking. Round 18, Bastianini performed a lap faster than the opponent about 0.5s, and put an end to the opportunity for the group to chase behind. Since then, driver #23 has won the 2nd win in 3 stages with a 2s difference from the nearest driver.

This achievement helps Bastianini return to the No. 1 position in the individual rankings with 61 points. Miller didn’t keep pace well enough to defend against Rins and let handle #42 pass in the penultimate corner. Rins has her 2nd consecutive podium while Miller also has her first top 3 result in 2022.

Mir ranked 4th in the race, also occupying P4 on the individual rankings. Bagnaia finished fifth, followed by Marquez, who made an impressive comeback at COTA from 18th in round one, and defending champion Fabio Quartararo, the top-ranked Yamaha of this stage. Aprilia and KTM also ranked the highest, respectively, at P10 (Maverick Vinales) and P12 (Brad Binder) in the US.

The fifth race will begin its journey in Europe at the Algarve international circuit, Portugal from April 22 to 24. 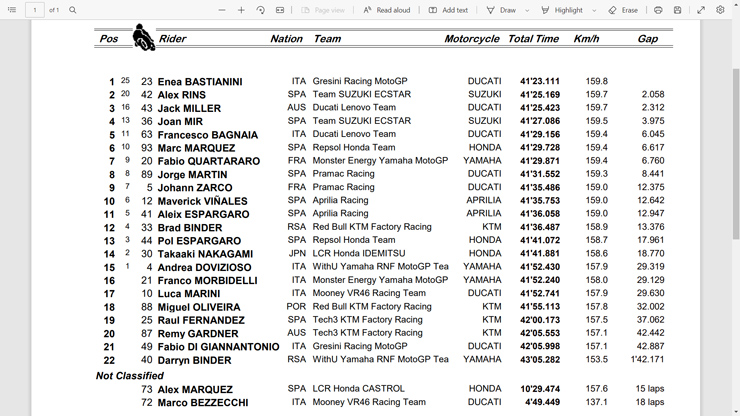 (Sports news, F1 racing news) A race of ‘ends’ when a series of prominent names had to end their proud personal achievements. Face…