(Sports news, motoGP racing news) MotoGP returns to Losail for the second consecutive week and riders have continued to offer fans the next exciting races. Yamaha factory racing team is the name honored in the first stage and this time, in a historic night “renewed”, they succeeded again in a way that no one expected.

Red Bull KTM rookie 16 years old Pedro Acosta and six other drivers had to start from the pit lane due to carelessness in the FP2 run (affecting another driver’s lap), however he had a race. to life and go into history just over 38 minutes later.

“Phenomenon” 16 years old, Acosta goes into the history of MotoGP

The disadvantage comes from the pit-lane, after the first round Acosta is less than 10 seconds behind the leading group, but since here, # 37 has made an impressive comeback. As the leading group continuously competed for position, the distance with the group behind was dramatically shortened.

After more than 2/3 of the race, Acosta reached the top 10, he calmly ‘dodged’ all collisions occurring on the road. Thanks to that, the Spanish rookie rose to the top in the final round. Darryn Binder in second place shows the experience and the bravery to “steal” the victory at the decisive moment, but that is not enough to prevent Acosta from making history.

The 16-year-old rider won his first career Moto3 after podium in its debut, and was the first Moto3 driver to be crowned after starting from the pit lane, a historic feat considered “a thousand years with a” .

He rose to the top of the individual rankings after leg 2. Binder had the second podium in a row for second place, while Niccolo Antonelli got his first podium since winning at Jerez 2019. Winner at QatarGP, Jaume Masia had a disappointing race when only finishing 9th. Lowes stood firm under the pressure of the “bull-but-bulls” duo.

Sam Lowes has a second pole this season but again he did not take advantage of that advantage when he let his opponent Marco Bezzecchi pass in the first corner. However, just like the race 7 days ago, the driver He soon regained No. 1 and had stable form in the next rounds.

Bezzecchi could not maintain the second place but let Red Bull KTM duo Remy Gardner and rookie Raul Fernandez surpass. He must accept 4th place in the end.

At the top, Fernandez is in the process of learning and accumulating experience at Moto2, so only Gardner and Lowes compete to win. Australian # 87 handlebar persistently chases and makes no mistake, he even has a chance to strike in the final round.

However, Lowes proved too brave to go to the 2nd consecutive victory and the perfect 50 points after 2 legs. Gardner has the second podium in a row, while rookie teammate Fernandez also has his first podium Moto2 career. The duo of the Pramac Ducati satellite racing team, Johann Zarco and Jorge Martin suddenly took 1-2 starting positions, in which, rookie Martin had the first MotoGP pole in his career right in the second leg.

Just like the opening race, when he improved 10 steps from the 14th starting position, Martin had a good depart (to take place) to preserve the lead through the first turn, followed by teammate Zarco. Miguel Oliveira (KTM factory team) from 12th place had a divine start when at one point the car was ranked 3rd, and placed 6th at the end of round 1.

Aleix Espargaro also rose 4 places to 3rd place after the first round for Aprilia, but both he and Oliveira on the KTM car also only acted as the “pusher” for the main candidates of this stage.

The driver of the first leg, Maverick Vinales ranked 3rd at the start of the race but he had the first few rounds of disappointment as he dropped to the lowest at 11th place. Teammate Fabio Quartararo did not do much better when falling to 9th , for Ducati and Suzuki to rise up. It seems that their fate will be arranged in this race without making any impression, then both flared up strongly in the second half of the race.

1st Podium for Martin and 50th (in all modal) for Zarco

Suzuki is always a dangerous opponent in the main race because of the stable race pace and good tire retention. Alex Rins reached the top 3 right from the third round and in front of him there were only the duo of Pramac.

He easily defeated Zarco but could not find a way to lead, not even less than once the Suzuki # 42 was “swallowed up” by Ducati’s terrifying speed on the straight line. The difficulties were difficult because then Rins was overcome by the other drivers of Ducati and Yamaha, and there was no chance of competing with podium.

Round 12-13, the race saw Jack Miller and defending champion Joan Mir have 2 consecutive collisions in just half of the race, including a dangerous situation right on the straight line through the start / finish line at 200 speed. km / h (Mir claims that Miller deliberately caused the collision).

The race referee did not give any penalty for the above incident. In the last 6 rounds, the Yamaha duo started to accelerate, they easily defeated Miller and Bagnaia to put pressure on Zarco and rookie Martin, who remained excellently leading until round 19/22. 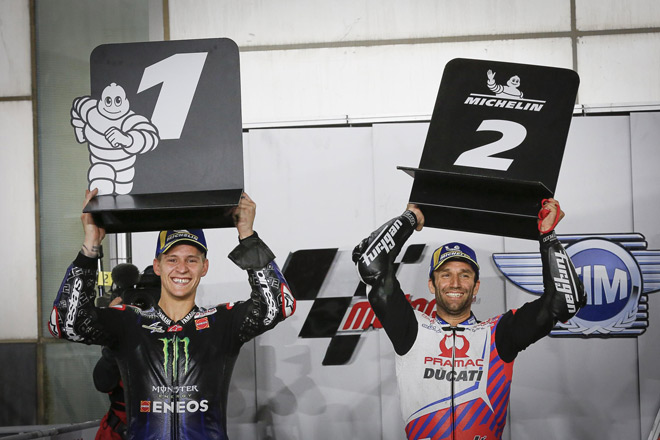 But at this point, he no longer had the strength to fight the rising Quartararo. The French driver had an impressive performance, to lead the race in 4 decisive rounds, from there to his first victory in 2021, the first in 7 races (Catalan GP 2020).

Vinales seems to be at least second, but Zarco’s haste and experienced style have left # 12 at the fifth place, behind Rins.

Zarco successfully defended against Vinales, then overcame his rookie teammates to finish the second finish, bringing a rare 1-2 victory for the French at MotoGP, thereby temporarily rising to the top of the individual rankings with 40 points, followed by Quartararo and Vinales with 36 points. Martin ended the memorable race week with his first podium MotoGP career.

The next season of the season will return to Europe, starting at Portimão, Portugal from April 16 to 18.

Detailed results of the Doha GP 2021: 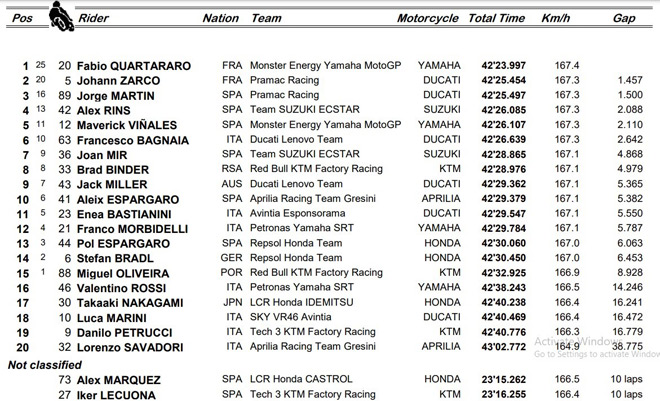 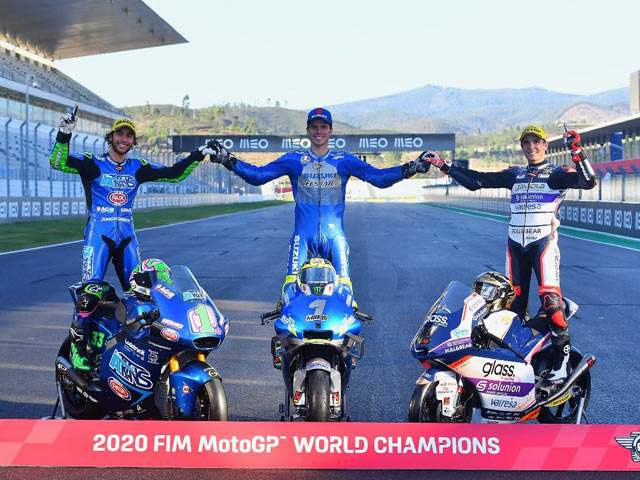