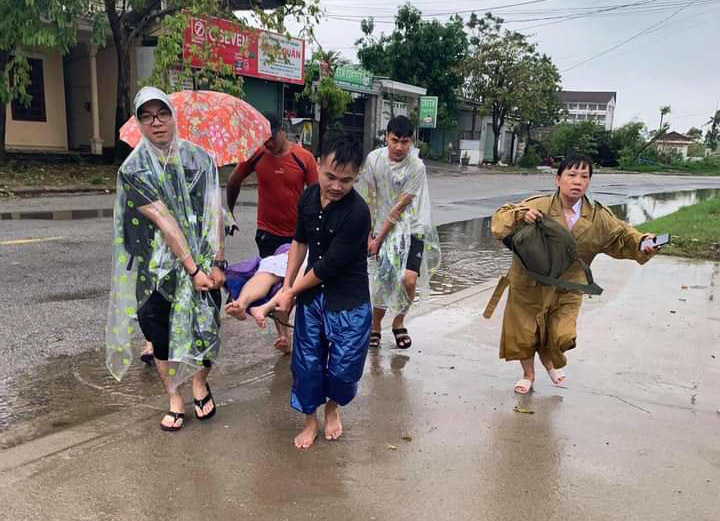 On October 13, in the Department of Obstetrics, Hue Central Hospital, Nguyen Nhat Truong held and comforted his first 4-day-old daughter. Besides, his wife is asleep because the incision is still painful. In the memory, the 29-year-old father is still not completely shocked when he remembers his wife standing in the middle of the road, under the pouring rain but could not call a taxi because that day the floodwaters in Hue increased rapidly. “I knew that it was very dangerous to move at that time, but there was no other way, the house and the commune health station were deeply flooded,” Truong said.

The young father said, around 1 am, on October 10, water began to flow into his house in Trieu Thuy village, Phu An commune, Phu Vang district. While everyone cleaned and loaded the things up, Phan Thi Anh My, 26, his wife went into labor. In the middle of the night, the power went out again, so the family planned to wait until dawn and would take her to the hospital. Meanwhile, Truong went to his neighbors and borrowed a motorbike.

Near 5am, he wears a raincoat for his wife, places a small chair in the middle of the boat for her to sit, and with his mother-in-law, he heads straight to Highway 49B into the city. On the way, it was raining and windy, but when it was morning, the three of them were safely on the highway.

But that’s only half the way. To reach Hue Central Hospital, which is more than 5 km away from the stand, Mr. Truong had to call a taxi. Make dozens of phone calls to taxi companies in the city but can’t find a car. Meanwhile, the pain of his wife getting worse and worse, Mr. Truong ran to the people’s house to find a means of borrowing but could not find it. Suddenly missing a friend’s house nearby with a car, he decided to wade to borrow a car, but after going for a while, the water was up to his chest, so he turned around.

In the midst of not knowing how to manage, Truong saw Nguyen Ngoc Tuan’s parcel truck approaching him. As he was about to wave his hand, Mr. Tuan stopped and actively opened the car door to ask about the flooding situation ahead.

“I felt like the light at the end of the tunnel,” Truong recalled. He opened his words to the driver, told his situation, Mr. Tuan immediately nodded and then backed up more than 100 meters, picking up Mrs. Mỹ and his mother.

“I used to take my wife to give birth, so I understand his feelings. I heard that my stomach ache from 1am, I suffered from the boat scene, the rain and wind were unbearable,” said the 33-year-old driver.

So everyone got in the car, Mr. Tuan knew that the road ahead could not go, so he chose a further road but less flooded. “He turned on the heater in the car to help my wife cool, I just asked him to take him to the deep water, but he brought it to the emergency gate,” Truong recalled.

That afternoon, My sister gave birth to a 3.3 kg baby girl, a round mother.

Also returning to labor at noon on October 10, but Mrs. Truong Thi Thu Trang, 31 years old, could not go to the hospital in time and gave birth to a healthy baby girl right on a boat that was overcoming the flood.

Trang and her husband work in Binh Duong. Coming to the birth day, she went to her mother’s house in Dien Dai village, Phu Xuan commune, Phu Vang district to prepare to welcome her daughter. The day she started to hurt her stomach, seeing the floodwaters rise quickly, her family took the initiative to rent a boat near her house and take it to the hospital. But while still floating in the vast fields of water, Ms. Trang gave birth right on the boat.

On the high road in Phu Thuong commune, the surrounding people knew the news, so they ran to the nearby commune medical station to call the nurse.

Vo Thi Phuong Nga, 45 years old, a nurse at the Phu Thuong commune health station, said that when she had just arrived at the station to take a shift, two young men ran into a newspaper on the street with a woman giving birth on boat, ask for help Without thinking about anything more, she and a colleague put on the emergency bag on the table, running while wearing a blouse to the boat that was anchored about 300 meters from the station.

Seeing that the baby was placed on the mother’s womb, on her body only wrapped a thin layer of towels, it started to rain heavily, so Nga took more towels to wrap the baby to keep warm. After that, we took raincoats to cover their stomachs and then asked two young men and children to go on stretchers and shields to enter the station. After nearly two hours of cleaning and taking care, Ms. Trang and her child were safe.

Yesterday, Ms. Trang and two other women broke up at the station to go home because the water had decreased. Ms. Nga and her colleagues also returned home after 3 consecutive days at the station. In addition to taking care of the maternity, baby nurses cook and serve meals for pregnant women and family members.

Mr. Bao, the husband of Mrs. Trang, because he cannot be with his wife during the birth, he has been sitting on a fire these days. Although when he learned that the child was born on the boat, he felt a heart ache but still smiled, feeling his family was lucky.

“I’m thinking of a name that would suit my special birth circumstances,” the young father laughed.