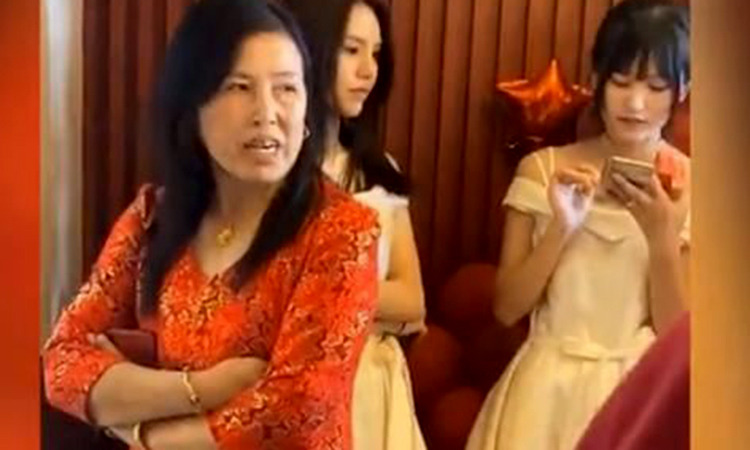 ChinaBringing 18,000 yuan (61 million VND) into the bride’s procession room, the groom was refused by his mother-in-law because he did not qualify to be her son-in-law.

The incident took place on October 8 in Xuzhou City, Jiangsu Province. According to local custom, when the groom comes to pick up the bride, the bride’s family will block the door from entering, forcing the groom’s family to “break the door” with a sum of money. However, this time it was the bride’s mother who prevented the boy from picking up the bride.

“18,000 yuan is too little to do,” said mother-in-law. The mother’s attitude surprised the boy. Fingerprinted on the bouquet, the groom shyly, his hands and feet frantically not knowing what to do next. Before the situation “half crying and half laughing”, a groom friend persuaded: “Teacher, today is a happy day, don’t make it difficult for us”. Another person also began to speak up, but the mother still insisted: “No, absolutely not allowed to go into the room to pick up the bride. This little money cannot qualify as my son-in-law”.

With the attitude of the mother, the bride made everyone more surprised when sitting on the bed silently looking at the phone, not even looking up. After being given the lucky money from her mother, she opened it and calmly counted the money in front of all the guests. That scene made the groom even more embarrassed, having to ask family members to take another 10,000 yuan and pick up the bride.

After the video was shared on social networking forums, many commented that the marriage did not appear to be in love. “Even if they get married, they are not necessarily happy because the connection between the two is just money,” said one person.

Meanwhile, many people advise the groom to rethink this marriage. “There may be a divorce party in a few days. It’s best to break up with that girl”, another commented.