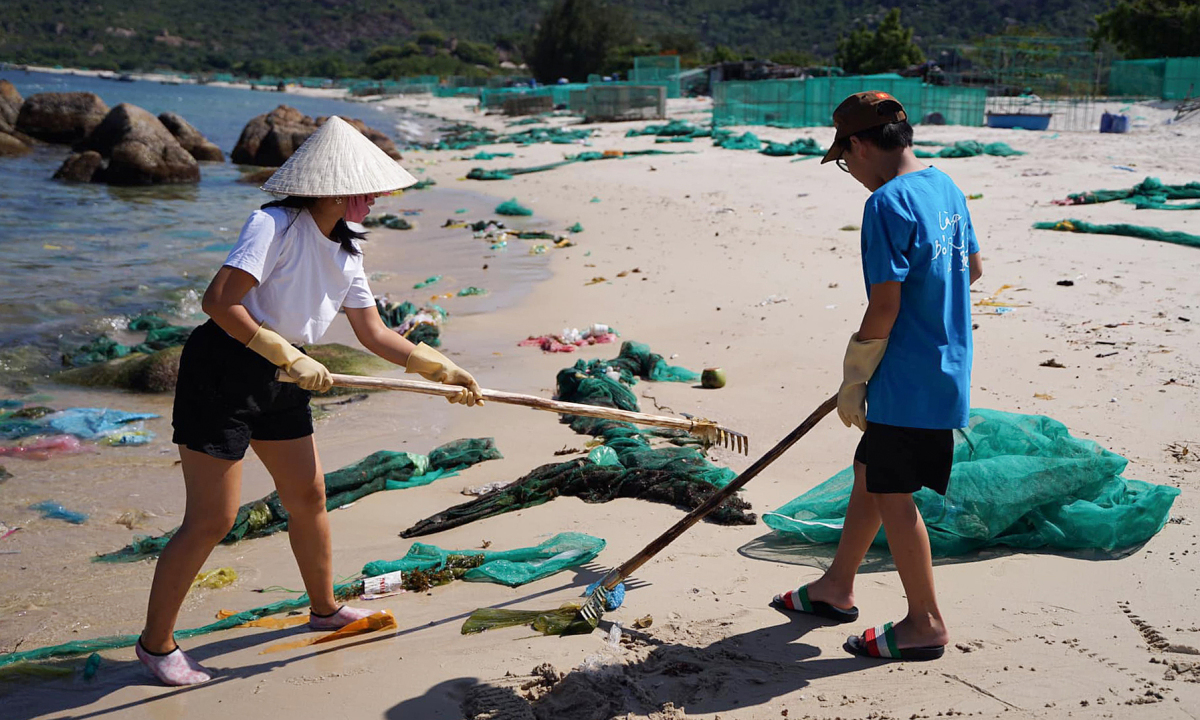 Khanh HoaHalf a year this year, every 5 am people in Binh Lap village again see Ms. Thien Binh, a woman who has just moved to Hanoi, quietly taking a rake to the beach to pick up trash.

Ms. Binh said, when she first came here at the beginning of the year, she was surprised to see that the sea in front of the village was covered with plastic waste. People in the area liken them to a giant carpet of garbage, flooded, holding fishermen’s feet every time they wade out where boats are anchored.

“Cam Ranh Bay is a cage aquaculture area, so every day hundreds of plastic bags containing fish food and household waste are discharged directly into the sea. They follow the wind and run aground on the beaches, which is very unsightly.” said the 41-year-old woman.

Unable to bear this scene, just a few days after “leaving the town to return to the sea”, Ms. Binh invited her son to pick up trash, burn and bury it in the ground in the morning, because the commune has no landfill, specialized collection and treatment units. Karma.

In June 2021, Ms. Thien Binh and her 12-year-old son from Hanoi to Phu Quoc, rented a house on Ham Ninh mountain to relieve stress after spending time at home because of Covid-19.

“But pollution at each school is the first thing I see. The whole Cam Lap commune has more than 300 households, nearly 700 people with a total area of ​​more than 21 square kilometers without a waste collection and treatment point,” Ms. Binh said. All waste from shrimp cages, plastic bags, bottles is treated by hiring collectors, then impregnated with gasoline and burned right on the beach or left to float freely, washed up on sandy beaches, rapids.

Unable to bear the sight of the deep blue sea, now littered with garbage and the stench of fish carcass washed ashore, Binh’s mother and daughter, along with a friend, cleaned up trash around their living quarters, then brought it home to burn and bury it in the garden. . Cleaning up for a few days, garbage from other places came back, the three continued to bask in the sun to collect and burn garbage, but never had any intention of giving up.

Seeing the newcomers working hard to pick up trash, mobilizing each household not to discharge waste into the sea, instructing on how to handle it safely, many people said that Ms. Binh is free, crazy, and likes to worry about money because that is her responsibility. government. But there are also people who feel hurt, go out together.

“If you keep calling people to protect the environment, but if you don’t act yourself, no one will believe it. I hope people change their perception and clean up garbage along the coast of Cam Lap and beyond, the neighboring provinces.” Ms. Binh said.

Wanting more people to know and act together, in mid-June, Ms. Binh formed the group “Touch Blue” with the meaning of “touching the blue, touching the sea”. After more than a month of establishment, the group has nearly 400 members, including Binh’s mother and daughter, fishermen in the village and people interested in the marine environment across the country.

In addition to daily garbage collection with 5-6 key members, Ms. Binh also organizes a garbage collection program combined with a resort for adults and children in the provinces on weekends. Recently, on two days of July 23-24, more than 20 people in Ninh Thuan, Binh Thuan, Nha Trang and Hanoi went to Ca Dao cape, Binh Lap village to clean up trash.

Mr. Nguyen Minh Duc, 47 years old, manager of the group “Leaving the city to the sea” on social networks said that marine pollution is a painful problem that needs attention. Not only nature lovers, but also those who leave the city for the sea also gradually change their awareness of environmental protection. Ms. Binh is one of the few people with the most specific and practical activities. Some members of the group also actively went to Cam Lap to clean up trash, others started cleaning in the sea where they live.

“The group is still new, operating at small points that are at risk like ‘unloading salt’ if there is no specific and long-term plan. But if gathered into a block, build a marine protection network in all areas. In all provinces across the country, the environmental pollution is definitely improved,” Mr. Duc said.

Mr. Nguyen Van My, Chairman of Cam Lap Commune People’s Committee, said that Thien Binh’s group has just been established, but has supported and improved the marine environment, in the condition that the locality has no place to gather and collect common waste. . “The group’s activities are both timely and necessary, but also create a civilized life for local people. This is also the first time that a new resident who has moved to the locality realizes the importance of protection. environment and embark on implementation”, Mr. My said.

Currently, the Commune People’s Committee has a plan to collect garbage and submit it to the city for approval. When there is a specific plan, the local government will coordinate with the group, the tourism business units to organize the collection and take the garbage to the standard treatment place, ensuring the lives of the people.

After a few months, Ms. Binh shared that many beaches and rocky rapids in Cam Lap became clean and airy. White sand beaches gradually appeared, the sea became bluer, shrimp farmers began to consciously collect garbage. Along with raising people’s awareness, “Touch Blue” intends to buy plastic and nylon injection machines to process the collected garbage and sell it to recycling units. The proceeds will continue to be used for marine environmental protection activities.

“My sea is very beautiful, I wish there were more hands to contribute to protect and clean the coast along Vietnam, not only Cam Ranh,” Ms. Thien Binh said.

Some activities of cleaning up trash by mother and daughter, Thien Binh and Touch Blue members.