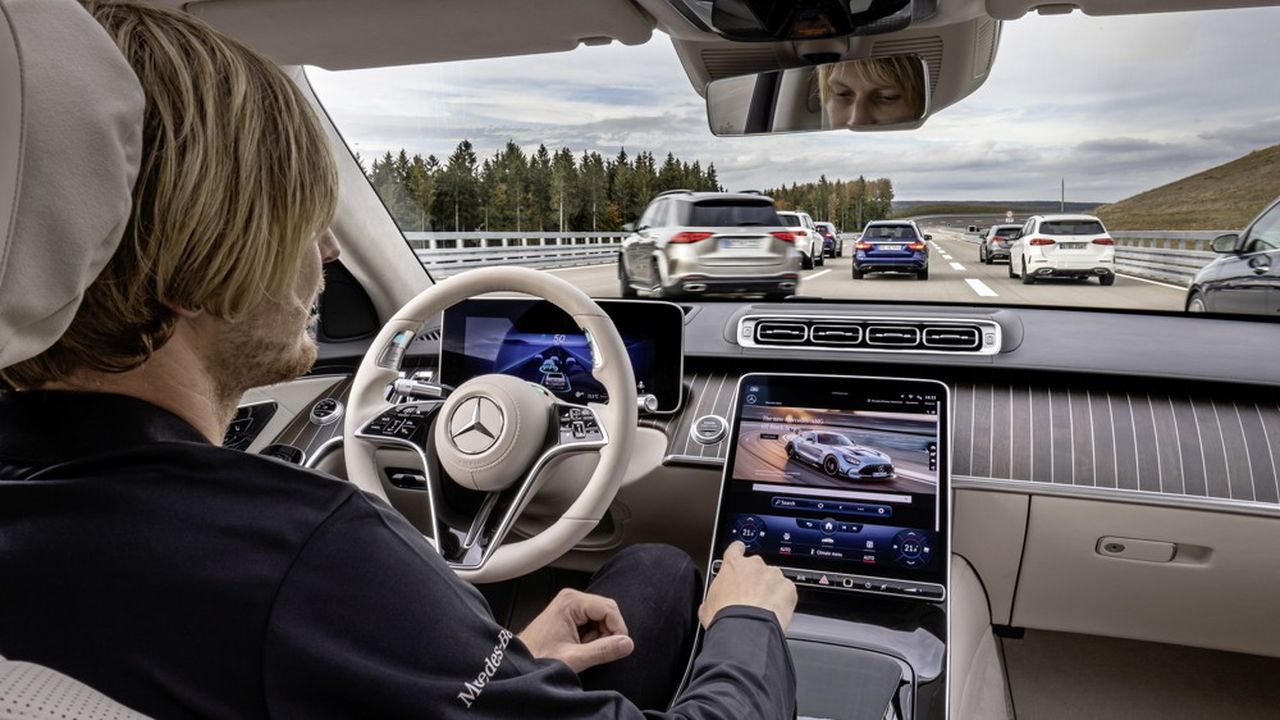 Mercedes-Benz obtained approval Thursday for its “level 3” autonomous driving system, which allows the driver to look away from the road in certain situations. The manufacturer is thus “the first global automotive group” to have received authorization to market highly autonomous vehicles that comply with the UN-R157 standard, where local legislation allows, according to a statement from the group.

The German manufacturer claims that the first customers will be able to buy Mercedes S-Classes from the first half of 2022 in Germany. These top-of-the-range sedans of the German brand will be equipped with a LiDAR (laser telemetry) system developed by the equipment manufacturer Valeo. The system can then only be used in the event of heavy traffic on motorways, with a maximum speed of 60 km / h. “Tests of the system are in progress in the United States and China,” notes the manufacturer.

A “level 3” autonomous car can be driven without human intervention in certain specific situations. Often referred to as “vehicles with eyes closed”, these cars are equipped with a device that allows the driver to consult e-mails, browse the internet or watch a movie on the car’s central screen, but it must be there at all times. able to intervene if the system requests it. If it does not react within a certain time, the car will stop automatically “safely”. He cannot sleep while driving, contrary to what is authorized, still under certain conditions, for “level 4” vehicles.

Germany is a European pioneer in autonomous driving, driving “level 3” has been authorized since 2017. The manufacturer Audi has considered integrating this technology on its flagship, the A8, before retracting. At the end of 2020, Japan became the first country in the world to approve a level 3 autonomous system on public roads, integrated on a Honda Legend, marketed in limited series in spring 2021.

At Tesla, autonomous driving currently marketed requires an attentive driver at all times, supervising the operations of the on-board computer (called level 2). Elon Musk’s company, a pioneer of electric and autonomous mobility, is also under fire from criticism from the American regulator, who accuses him of having ignored his recommendations on the driving assistance system.

The Stellantis group (Peugeot-Fiat), for its part, plans to implement in 2024 its first level 3 system, developed with BMW. “Before extending it to all ranges” of its 14 brands, assured Tuesday Joachim Langenwalter, vice president of engineering, at a press conference on software.

The levels qualifying autonomous vehicles are classified according to the degree of intervention of a driver and his degree of attention behind the wheel.

They range from “level 0”, where all aspects of driving must be taken care of by the driver (including reaction to danger), to “level 5”. The cars therefore do not require any human interaction. For the time being, they are only at the project and concept car level.