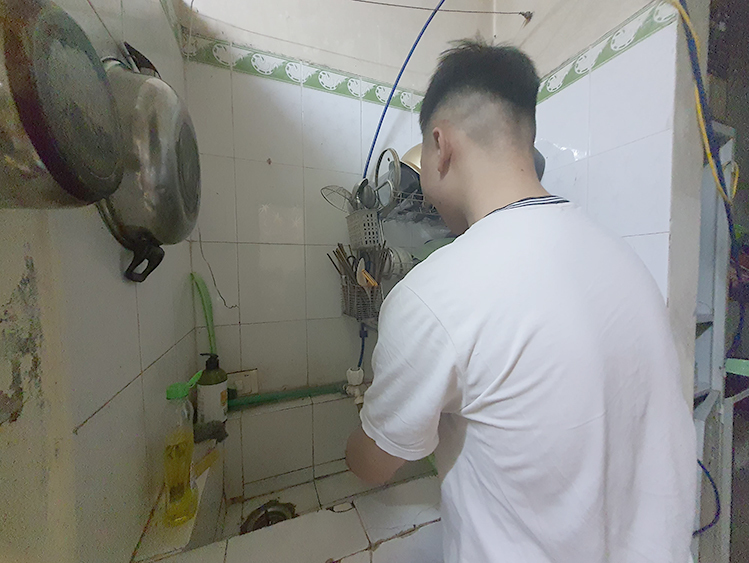 Nearly 5 years since the wedding day and living at his wife’s house, Quan did not dare to invite friends to play because he was afraid of his wife’s family partly, afraid of friends.

“Invite them to come, they say that your closet is so wide that it can’t fit in,” said the 31-year-old man. Quan was teased like that on the day of his wedding, even his friends nicknamed him “Tan Vuong”.

Hoang Quan is a boy from a small province, and his wife Minh Khue is an only daughter, living in Hanoi. After getting married, because she was pregnant first, Khue and her husband lived in the same 100 m2 house in Cau Giay with his wife’s parents. Quan was not interested in being a son-in-law, but his income at that time was only about 15 million VND, plus his wife’s meager salary in a state agency could never buy a house. Hearing his wife’s proposal, Quan agreed because he thought “the house is large, it’s enough for four people to have grandparents to take care of children”.

At his son-in-law, Quan gradually abandoned all invitations to drink with friends and colleagues because he was afraid to be asked about the house. Every few cups, his in-laws are discussed. Someone joked that he was “choosing a good father-in-law” or “a big house without inviting anyone to play”.

Even his own relatives looked down on Quan to his face. Many times, he suffered from the mechanical words of his uncles and uncles in the countryside. “They say, being a man, you can’t stay in law, even if you have to be a man, you have to be yourself,” Quan said.

Quang Hieu, in Phu Ly, Ha Nam is also in the same family as Quan. After the wedding at the end of 2020, Hieu and his wife did not live in the same house with their parents in the street because they did not want to be cramped. Meanwhile, his wife’s family and sisters all married far away, so he decided to stay in-law to take care of his elderly parents.

Fearing that Hieu would be uncomfortable, his wife’s parents created all conditions for their son-in-law to feel like living in their own home. They reserved for him a working room, fully equipped with modern equipment. Life after the wedding is pleasant, but when you step out of the house, things are completely different.

In the eyes of many people, being in-law means that Hieu is a failed man, even “clinging to his wife’s skirt”. Once when he went to take out the trash, as soon as he turned away, he heard some neighbors talking about each other, saying that his parents-in-law built a charity house for his son-in-law to live in. “Even though I’ve lived here for a whole year, the topic of my in-laws has not ended,” Hieu sighed.

Quan and Hieu are examples of men who stay in-laws after marriage, due to economic as well as family circumstances. According to Dr. Khuat Thi Thu Hong, Director of the Institute for Social Development Studies (ISDS), the reason that most Vietnamese men feel guilty or even afraid of in-laws is social prejudice.

“Daughters follow their husbands by default, and men who return to their wives’ homes are more or less met with scornful glances and are considered incompetent,” said Ms. Hong, adding that in-laws are also one of the most important decisions. gender prejudice that Vietnamese men have to endure.

In 2020, ISDS surveyed more than 2,500 men aged 18-64, living in Hanoi, Ho Chi Minh City, Khanh Hoa and Hoa Binh. Due to the heavy gender stereotype that “men should be the breadwinners in the family”, nearly a quarter of respondents admitted that they feel a lot of pressure in their lives. In which, more than 80% of men feel pressured about their financial status, 70% are not satisfied with their work.

“Buying a house, earning money to support a wife and children, worshiping ancestors… becomes a great obligation and pressure for men. Once these obligations are not fulfilled, it is easy to lead to concerns about mental health. their god,” shared Ms. Hong. When being touched for not fulfilling their obligations, a man’s self-esteem is hurt, which can be the trigger for conflicts in marriage.

When he was newly married two years ago, Quan took a month to get used to the life of his wife’s house. The couple lived together, but he never spoke harshly, even though sometimes contradicted by Khue or told his mother. “Don’t scare your wife and children. In other people’s families, the daughter is angry with her husband, but she can go back to her mother’s house, over here …”, the mother-in-law’s words made Quan extremely awkward.

The day his son was born, there was a conflict between him and his wife’s parents. Behind Quan’s back, they criticized him for being a countryman and not taking good care of his children. Even my grandparents who came to play with me for half a day asked to return, because “they live differently from me”.

Since the wedding day, Quan feels that he does not have any “man’s rights”, not even being able to decide many things in the house by himself. Once back home to Hanoi late, he was scolded by his mother-in-law, saying he did not know how to love his wife and children. The very next day, Quan packed up his belongings and moved out, with a message to his wife: “I’m renting a temporary house. Please think carefully about this, decide and let me know”.

Quan said, going out to rent a house even though losing 5 million a month is better than living in a big house but full of contempt and disapproval.

Hieu also often took alcohol to forget “his life of eating and drinking”, as he likened it.

In order to cope with the pressure and tension with the stereotype that “man must be the breadwinner”, many people like Hieu “look for harmful ways of venturing out”, according to ISDS’s survey. Among them, smoking and drinking are the most common, with 6 out of 10 men having drunk at least once in their lives.

A few days ago, I was busy drinking, so it was late at night when Hieu called and told me not to eat at home. Afraid because parents have to wait for the son-in-law’s meal, when the husband just returned, his wife’s face was heavy and her eyebrows were light. Words back and forth, grandparents downstairs heard up to remind the two children. Having a little yeast in him, Hieu said that his wife’s parents despised him in law. At the end, both the wife and mother-in-law sat crying.

“Being in-law is not easy for any man. But don’t lose your happiness because of old prejudices and unworthy criticisms,” said psychologist Trinh Trung Hoa. According to him, being in-law or being-in-law is similar in having to learn to live together. Happiness or misery depends a lot on how the people in the relationship behave, whether they can control themselves or not.

For many years as a family happiness consultant, Mr. Hoa shared that there are two things for a peaceful marriage: circumstances and people. Under the circumstances, if the wife is an only child, the father or mother-in-law dies early or falls ill, so she should stay in law. “After marriage, the groom is also a child. It is reasonable for the husband to work together and share in taking care of his elderly parents,” said Mr. Hoa.

In the other factor, overcoming psychological obstacles is always very difficult. The groom should ignore all external provocations and take responsibility for his decisions. The wife also needs to be understanding and skillful in the behavior between her parents and her husband. Parents-in-law should see their son-in-law as a son, love and share.

“As for the cases of living together but having conflicts, living alone is the most reasonable solution,” Mr. Hoa affirmed.

For ten years living with his wife’s family, Mr. Duc Tu, in Ngoc Ha, Hanoi has always felt comfortable. Although his economy is very good, he can afford to buy his own house, but this man takes the initiative to stay in-law, because his wife has an only child, and his father-in-law has passed away.

“My mother-in-law is also my mother. Why is it that because of a little male dignity, she leaves her alone and without someone to take care of her,” said Mr. Tu, 42 years old. Before the wedding, Tu himself suggested to live with her.

The father of two affirmed that if he considered his wife’s house as his nest to cultivate, everything would be different. At his son-in-law, he often helps his wife and mother with the housework. Whatever is important, Tu also consults people before doing it. Sometimes he buys small gifts for his mother, takes her out to eat at weekends.

“Human value is not who you are, but how you live is worth mentioning,” Tu affirmed.

*Names of some characters have been changed