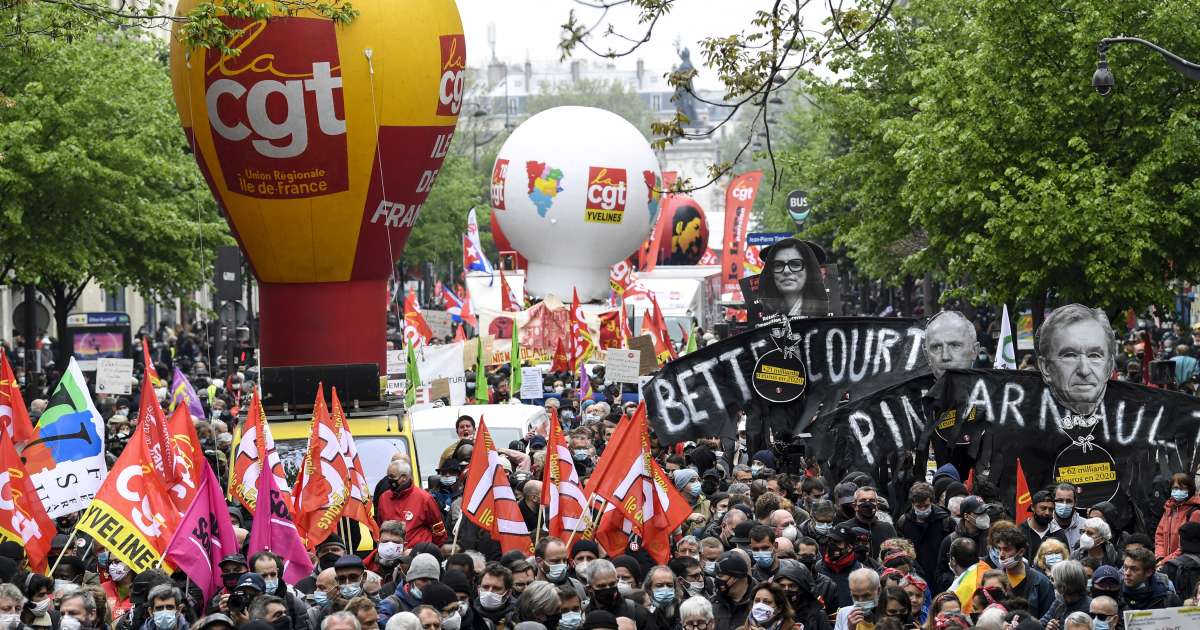 The unions were able to find the streets for the International Workers’ Day 2021, after a confined May 1, 2020. Despite the rain and the Covid-19 epidemic which still persists, thousands of demonstrators have gathered in defense of jobs and freedoms. However, tensions have punctuated several processions, especially in Paris.

The CGT, which had counted nearly 300 demonstrations in France, had called, with FO, the FSU and Solidaires to make this May 1 a day “For jobs, wages, public services, social protection, freedoms and peace in the world”.

Jobs, wages, management of the Covid crisis by the government, restrictions on freedoms …: in the processions, the demands were varied, the challenge of the unemployment insurance reform, which is due to come into force on July 1, returning from recurrent way. “Yellow vests” took part in several parades, including the Parisian demonstration.

In Paris, the demonstration started shortly after 2 p.m. from the Place de la République to that of the Nation, the numbers one of the CGT and FO marching side by side for the first time since 2016.

One year before the presidential election, several political leaders of the left took part in the processions, such as Jean-Luc Mélenchon (LFI) and Fabien Roussel (PCF) in Lille, the latter affirming that“We start to explode with anger”.

Tensions quickly arose, with “Repeated attempts to constitute a black bloc ahead of the union procession” who for a long time blocked the demonstrators, according to a police source. The procession advanced sporadically.

Protesters involved in the unrest were estimated to be ” few hundreds “, while 5,000 police and gendarmes were mobilized in the capital, police source.

The window of a branch of Société Générale, located on Boulevard Voltaire, in the 11th arrondissement of the capital, was damaged as the procession passed, which left from Place de la République to join that of the Nation. The windows of a bus shelter were also destroyed.

Projectiles were launched in the direction of the police, who responded with tear gas or with de-encircling grenades.

The police headquarters reported 34 arrests. Fourteen people were taken into custody, according to the prosecution.

“Thank you to the police and gendarmes for their action vis-à-vis those who did not come to demonstrate, but to break up”, Interior Minister Gerald Darmanin wrote on Twitter, bringing his “Support for wounded security forces”.

“Some clashes” in Nantes

Brief tensions were also observed in other cities in France. In Lyon, where 3,000 people demonstrated in the rain, according to the prefecture, a brief clash broke out between a small group of “Black blocks” and the police. The prefecture reported five arrests and the demonstration ended peacefully.

In Nantes, the demonstration brought together 3,750 people, according to the prefecture, which reported “Some clashes” momentary linked to the presence of“A hundred people from the ultra left”.

Demonstrators (around 2,000 according to the CGT) also gathered not far from Caudan (Morbihan) where the Foundry of Brittany factory is located, on strike against the cession of the site by Renault.

In Strasbourg, where they were between 1,300 (police) and 5,000 (unions), we could read on signs: “Withdrawal of the unemployment reform” or “My retirement will be as rotten as my sign”.