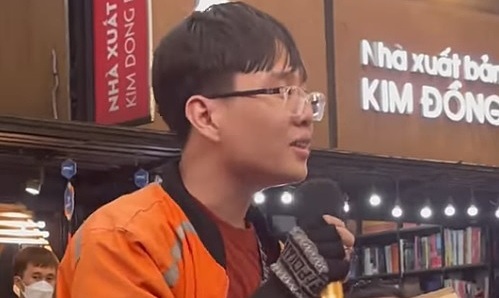 Ho Chi Minh CityDuring an exchange with writer Marc Levy, the guy in a shipper uniform surprised everyone when he stood up to ask questions in French, on the afternoon of 9/11.

In the video that has been widely shared in recent days on social networking forums, with hundreds of thousands of likes and comments, the shipper guy was the first to raise his hand to ask the writer a question without saying anything. need translation: “Especially in two works The first day and First night, he has set the highly sought-after profound details, including questions about the origin of the universe, human beliefs. So, what inspiration helped you find such subtle scripts?”.

The shipper’s confidence and ability to speak French fluently surprised many viewers, including writer Marc Levy. He quickly answered questions.

Phuoc said, on November 8, he accidentally bought two old novels First night and The first day, original in French by Marc Levy on Tran Nhan Ton Street, District 5, at work. Knowing that there was an exchange with the author at Nguyen Van Binh Book Street, District 1 on the afternoon of November 9, he decided to stop delivering to attend.

After the question with the author and the end of the event at 6 pm, Phuoc continued to deliver the goods until late at night without expecting the French “shoot” with his writer to suddenly cause a storm online.

“Perhaps the uniform shirt attracts my attention because many people default to the shipper as a freelance worker, with little mental work, so communicating with foreigners is quite strange. If you wear a normal suit, ask a few questions. French probably won’t notice,” he said.

Huynh Huu Phuoc added that before becoming a student at Ho Chi Minh City University of Education in 2015, he studied French from grade 1 to grade 9. A few months after becoming a new student, an incident forced him to go. accommodation. Outside of school hours, Phuoc works part-time in a restaurant, a coffee shop, looks after a car, works as a security guard, delivers goods to pay school fees, and helps his mother cover living expenses. Good academic force and hard work help male students have the opportunity to participate in scientific research with faculty members.

In the third year of university, the economic pressure was increasing, causing Phuoc to work 2-3 more jobs at the same time. “Teachers in the department constantly help and encourage me, but I can’t handle it due to the economic burden, so I have to reserve my academic results from 2019,” the 25-year-old said.

Delivery is busy from morning to night, but Phuoc always takes advantage of his lunch break to drive to Tran Nhan Ton Street to buy used books, satisfying his passion for French, English, Japanese and Chinese literature. He said that he must study and read books every day so as not to forget his knowledge, always in a state of readiness to return to school if he wants to keep up with his friends. Besides adding knowledge, Phuoc has finished translating a book from French that has not yet been published.

In addition to the full-time delivery job, Huu Phuoc still dreams of graduating from university, pursuing a master’s degree, becoming a lecturer or good translator like teachers in the department, hoping to be able to support and give wings. dream for students with similar circumstances to overcome difficulties.

Exchange with VnExpress On the afternoon of November 15, Ms. Tran Le Bao Chan, deputy head of the French department, Ho Chi Minh City University of Education, confirmed that Huynh Huu Phuoc is a student of the faculty but is reserving her studies due to difficult family circumstances.

“Huu Phuoc always aspires to go to school, has the will to progress, but due to circumstances, he has to pause his dream. I hope he can return to school soon to continue his studies, graduate and achieve his goals such as: wish,” Ms. Chan shared.