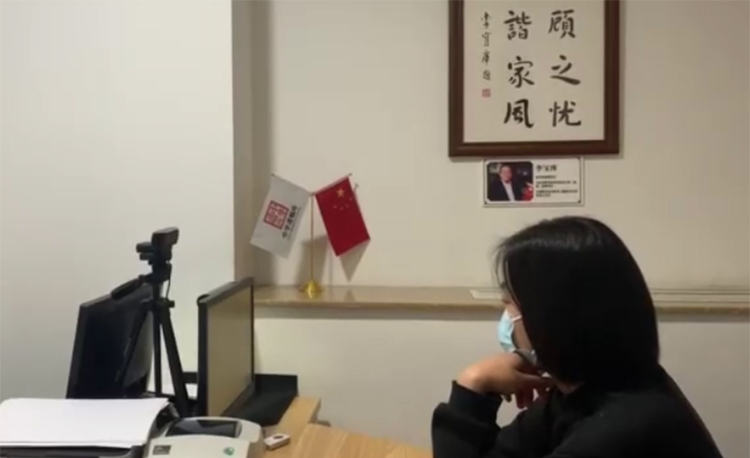 ChinaSitting in front of the camera, Dich Lam began to read his will, which stated that he would leave his social media accounts for his parents, and clothes for mountainous schools.

After filming, the will of this 21-year-old girl needs to go through the next steps such as facial recognition, identity verification, mental assessment of the signer. The will is printed, sealed in a file, and stored in the archives. The whole process took less than an hour.

In the lobby of the Chinese Wills registration center, which is 30 square meters wide, Dich Lam stands out among the gray-haired old men brought by their descendants. She came alone because she hid from her family, afraid they would think.

Yilin, a fourth-year student at a university in Beijing, planned to make a will nearly a month ago. When she signed the paper, she felt relieved: “I was thinking about things that happen after my death. Making a will means that I have done well in my life’s mission.”

Currently, the types of wills of young people are more diverse than that of old people. Virtual assets such as Alipay, WeChat, QQ, game accounts… are very popular in young wills. Since the outbreak of the Covid-19 epidemic, China’s will database has opened the “WeChat Will” messaging function. In particular, the users of this function are mostly young people.

Wei Xiaojun, director of the Family Affairs Committee of the Hangzhou Bar Association, just met a testator when he was 21 years old. “I feel young people today are more open,” he said.

In matters of life and death, people born after the year 2000 have their own views. After his friend, a programmer, died suddenly on his desk, Ali, born in 2000, had the idea of ​​​​making a will. The young man who is about to graduate from the university in computer science has received several offers from Internet companies. During the internship, A Ly realized that the risk level of the programmer profession was also very high.

“There is a new project, all employees have to live at the company 24/24h”, the young man said. During the 4-month internship, Ali gained 5 kg for the reason that “just sit and work and eat, even go to the toilet quickly”.

This month, with the recommendation of a friend, Ali sought a lawyer for advice on making a will. After a week of checking assets, the 22-year-old entered his parents’ names to receive three bank cards with 50,000 yuan if he died.

Anh Tu, born in 2000, chose to make an oral will after an accident in Suzhou. As soon as she stepped into the elevator, she had to experience “extreme fear” when the ladder was free-falling for 5 seconds. Fortunately, after drifting a few floors, the ladder also stopped.

This girl doesn’t remember how she cried after jumping out of the elevator. Anh Tu believes that time will heal everything, but her dreams after that only involve death. After a week since her death, in the presence of her boyfriend, A Tu wrote a will on Wechat. She shared that she did not make a will to rearrange her life, but because her life was out of control.

“Can I leave a house for my best friend?”, “Can I transfer all my assets to my pet cat?”… Chen Kai, director of the China Wills Bank Regulatory Commission, asked received many such questions from young people.

According to Mr. Tran, it is a fact that these young people have no houses, no bank deposits, no stocks. With this “3 no” will, many people ask: Is this a joke?

According to the director, the diversity in inheritance is due to the development of the Internet, but it does not affect the validity of the will. As long as the testator has full behavioral capacity and normal intelligence, all wishes are valid. “For the generation born after 2000, not many people think about whether the heirs need them or not. They simply want to leave the best they have,” said Tran Khai.

With ten years of experience in the industry, Mr. Tran confirmed that many young people also edit wills. For him, this is normal because after a few years, people’s thinking will change. “Twenties for friends, 30s for parents, 40s for children. This is a common sequence in the human psyche.” The time to amend a will is usually 10 years, but very few people make changes in the first year.

In April 2021, a famous blogger in China released a video about people born after 2000 making wills. In the comment area, many people of this age share that they are suffocated by modern life, “can’t see the future”.

Wei Xiaojun said that the Internet is the main cause of this situation. On the one hand, young people’s view of life and death is more open. On the other hand, negative information has the ability to affect the social perception of young people.

“They come to make wills with a more relaxed mind, many see making wills as a way to relieve mental pressure,” said Mr. Wei.

After making a will, Dich Lam recorded a video of more than a minute explaining to her parents what she was doing.

“I love life very much and I accept death calmly.” In front of the camera lens, the 21-year-old girl repeated many times, “Thanks to writing a will, I am always prepared for the worst case scenario and have the “inner strength to live better every day”.