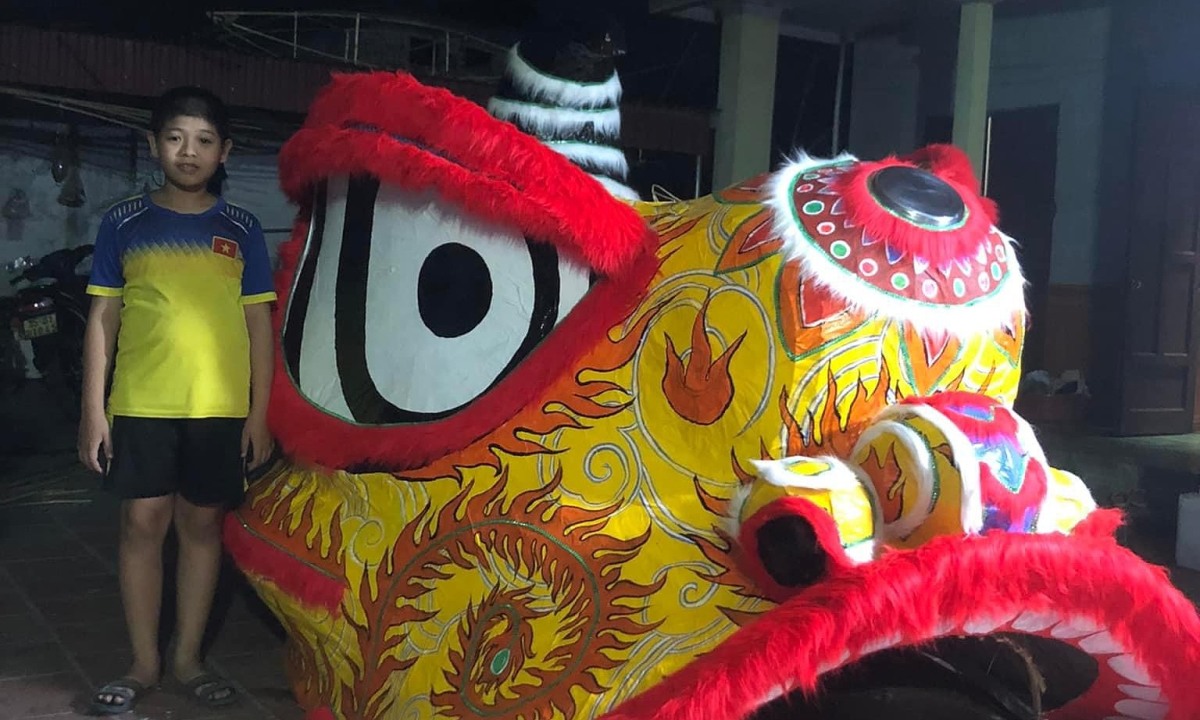 Hai PhongThe unicorn head is 2.2 m high, nearly 5 m2 wide. Cong’s group made in a week to parade on the Mid-Autumn Festival.

At noon on September 9, Mr. Nguyen Van Cong, 32 years old, and 6 people last checked the LED system attached to the two beards, the top of the horns, the forehead and the blinking of the unicorn head’s head high above the head, in a private home. in Quyet Tien commune, Tien Lang district. The unicorn head was completed by the team four days ago.

“At 5:00 p.m. this afternoon, we will bring the giant unicorn head and the star lamp with a diameter of 2.5 m to perform in the district center,” said Mr. Cong.

The idea of ​​​​making a giant unicorn’s head was proposed by Dang Khoa, a member of the kite flute club in Tien Lang district, hoping to create a comfortable and joyful atmosphere for people after two years of being affected by the epidemic.

“Listen to Mr. Khoa’s sharing, I and other members immediately agreed. We don’t have to brag or want to be famous, we hope to pass on the cultural beauty of the local culture to the younger generation,” said Mr. Cong. . From August 29, he and 6 other people gathered to make unicorn heads from 8 am to 10 pm, hoping to finish before the night of the festival.

The movement of lion dance and lantern procession on the 14th and 15th of the 8th lunar month is a traditional activity that takes place every year of the people of Tien Lang district. People in the communes made their own unicorn heads and star lanterns of all sizes, then took to the streets to parade. This activity not only attracts children but also attracts many adults to join in the fun.

The giant unicorn head was made by Cong’s group from a 9-meter-long bamboo and three 2.5-meter-long small trees. After two days of splitting and sharpening the bamboo stick, shaping and framing; workers began to wrap white bucket cloth, cover with specialized paper to wait for it to dry; after coating two layers of white paint; color; glued craft paper, fleece; the pattern on the head is painted with oil paint; Finally, interior decoration, installation of LED lights.

For the maker, every stage is complicated, laborious and requires high precision, during the making process, it is always necessary to discuss and exchange to create the most satisfactory product. “But no matter how beautiful the shape is, drawing the eyes without the soul is broken. Because the unicorn’s eyes are the highlight, the artist must know how to show the gentle, evil or arrogant spirit of the unicorn”, the craftsman revealed.

Completed a week of implementation, the unicorn head is 2.2 m high, 5 m wide, weighs nearly 50 kg, needs 4-6 healthy men to move, is completed. The cost of purchasing the equipment is estimated at about 6 million VND, contributed by the members of the group. This is considered one of the largest handicraft products of Tien Lang district up to the present time.

Fearing heavy rain on the night of the parade, Mr. Cong’s group prepared more tarpaulins to cover. “Now I just hope the weather clears up so that we can perform for our relatives. It’s okay to bear heavy rain, but we still go in light rain,” a member of the group confirmed.

The image of a giant unicorn head shared on social networks attracted tens of thousands of likes and comments. “The group that made the lion’s head is so big but so clever. They remind me of my childhood, when I and my neighbors bought bamboo, acacia, and paper to make, and then molded it into shape. A childhood sky is rare these days. still preserved”, user Tuong Vy commented.

After the Mid-Autumn Festival, Mr. Cong said he would spray anti-termite drugs to preserve and display the unicorn’s head in a private room. In addition, the group also began to come up with the idea of ​​​​making a new unicorn head for the Mid-Autumn Festival 2023. “The rush to work makes many details on the product we are not really satisfied with, but next year will certainly be beautiful and meticulous. and more unique,” said the 32-year-old.