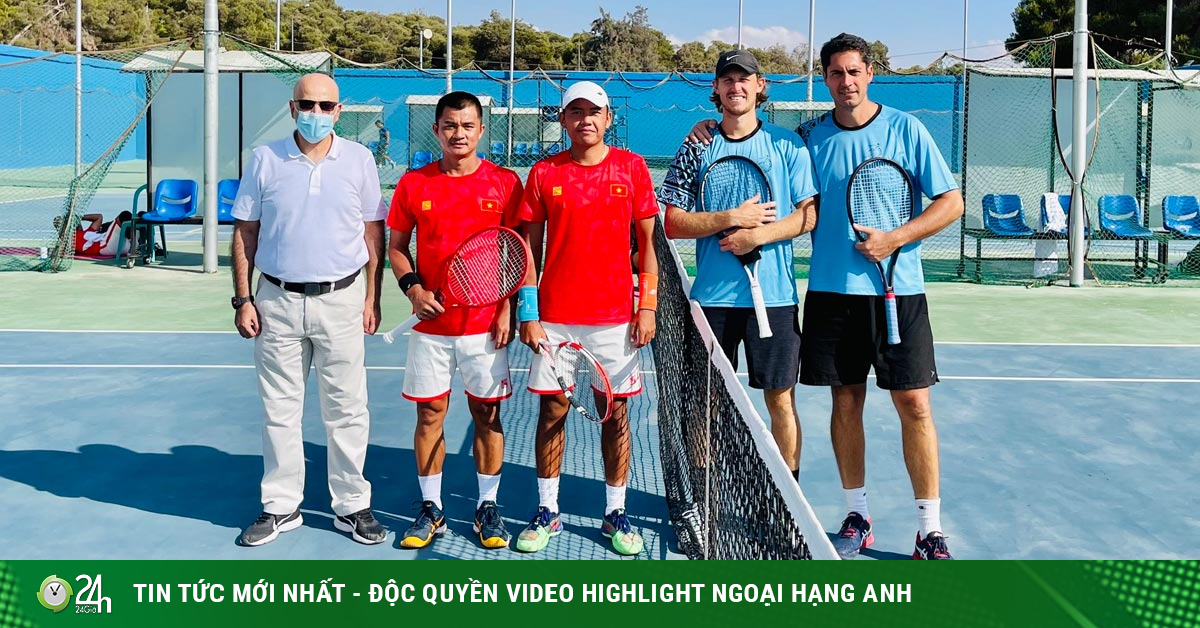 (Sports news, tennis news) The decisive victory of Ly Hoang Nam/Le Quoc Khanh in the men’s doubles match against the “ball machine” Colin Sinclair and Baudinet Brett helped the Vietnamese tennis team to win 2-1 before. Pacific Oceania after more than 7 hours and 30 minutes of fierce competition.

On the afternoon of September 15, the Vietnamese tennis team entered the competition in the first round of Group B Davis Cup Group III Asia-Pacific region taking place in Jordan. The opponent of Ly Hoang Nam and his teammates is the Pacific Oceania team (including athletes of Oceania national teams, excluding Australia and New Zealand), the team that owns the highest ranked player of the Colin Sinclair tournament. (ranked 735 ATP).

With the competition format of 9 teams divided into 3 groups, each group of 3 teams competes in a round-robin, choosing the top team to win promotion tickets, so every match of the Vietnamese team in Group B is a final.

Trinh Linh Giang is the pioneer for the Vietnamese team to compete in the first match in the men’s singles format, facing 18-year-old young talent Mainguy Clement. Linh Giang started quite well with an early break in the first serve game of the opponent.

However, he let the opponent win the break right after the game despite leading 40-0. Mainguy Clement kept his serve games and had another break in game 9, causing Linh Giang to lose 4-6 backwards.

Being led, Linh Giang is determined to return in the second set. The Hanoi-born player who is joining Hai Dang Club (Tay Ninh) competes from the very beginning and excels in winning the break in game 4, and at the same time not letting go. The opponent has a chance to break the break. The set ended with a score of 6-3 for Linh Giang. In the decisive 3rd set, the two players struggled, Linh Giang had a break first in game 5, but then Mainguy Clement won the break in game 8. Thought the set had to enter a tie-break series, then in the game On the 11th hinge, Linh Giang again had a break-point and ended the final set with a score of 7-5, giving the Vietnamese team a temporary lead of 1-0.

The next men’s singles match was a heroic show between the two highest ranked players of the tournament between Colin Sinclair (735 ATP rank) and Ly Hoang Nam (783 ATP rank). With a height of 1m88 and his back-to-back serves, Colin Sinclair shows why he is compared to a “serve machine” with a total of 15 points a.ce in the whole match.

In the first set, Sinclair broke early and maintained the advantage to win 6-4. Hoang Nam did not show a loss against a strong opponent, he played more firmly in the second set and won with a break-point in the last game, closing the set with a score of 6-4 and equalizing the score. 1-1. In the decisive third set, the two players chased each other fiercely until the score 4-4. It’s a pity for Hoang Nam when he leads the opponent’s serve games many times but can’t finish successfully. In which, in games 6 and 8, Hoang Nam had a lead of 40-15 at times. With regular international experience, Sinclair took advantage of more opportunities and broke Hoang Nam’s serve game in game 9, thereby winning the final set with a score of 6-4, thereby helping Colin Sinclair’s team balance. The score 1-1 forced the two teams to decide whether to win or lose by men’s doubles.

Less than an hour after the singles match, the two main players Ly Hoang Nam and Sinclair Colin returned to the field to face each other in the doubles match. If Ly Hoang Nam’s companion is the “King of Net” tennis player Le Quoc Khanh (39 years old), Sinclair Colin also stands with experienced captain Baudinet Brett (40 years old). With just one more victory over Qatar, the Vietnamese tennis team will officially be promoted to Group II Davis Cup

Hoang Nam/Quoc Khanh started very well with a 6-4 victory in the first set but let Colin Sinclair/Baudinet Brett equalize 1-1 when they won 6-3 in the second set. In the decisive third set, Hoang Nam/Quoc Khanh took the lead 3-0, then 5-2 before winning 6/3 to bring the overall victory 2-1 for Vietnam against Paciffic Oceania.

Thus, after more than 7 hours and 30 minutes of intense competition, the Vietnamese tennis team had their first victory at the Davis Cup in 2021. Thus, Ly Hoang Nam and his teammates only needed to win the remaining opponent at the Davis Cup. Group B is the Qatar team (world 111th), which will officially win promotion tickets to Group II. The two teams will meet at 14:00 (Vietnam time) on September 16.