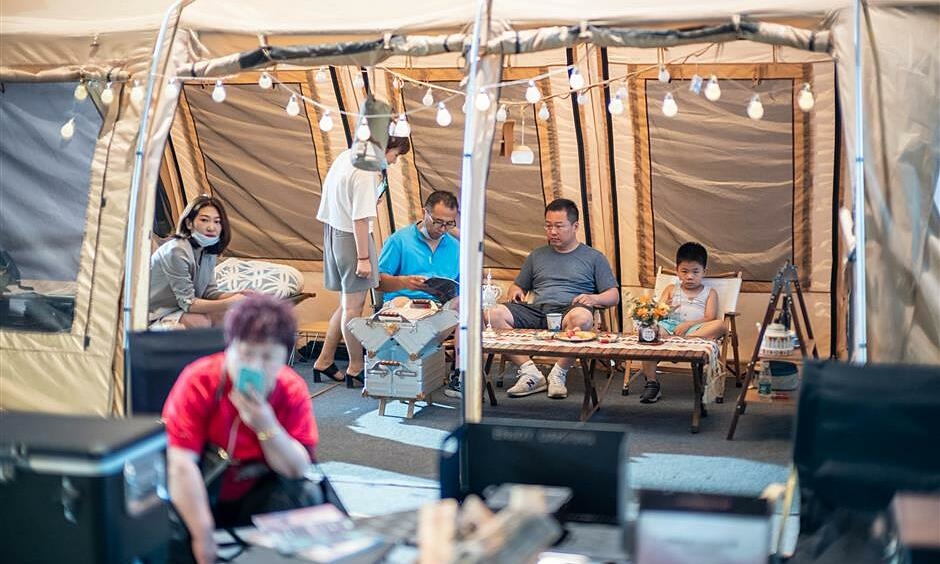 Camping with a large tent, fully equipped like a luxury hotel, is increasingly chosen by Chinese people.

For fitness trainer Xiao Pengli, camping means a simple overnight picnic surrounded by trees and mountains. But everything changed when Xiao had the experience of going camping with his girlfriend on Changxing Island (Shanghai).

The campground is located in Changxing Countryside Park in Chongming District. Guests can bring their own tents or rent them for 900 yuan a night (VND 3 million). Each tent accommodates three people, and guests can experience sumptuous barbecues, drink service and evening musical performances.

At the campsite, some families bring large tents, tall enough for an adult to stand upright. Others bring grills and make steaks from premium Wagyu beef. Some people carry coffee machines or expensive bottles of wine.

Compared to them, Xiao’s tent was nothing. “It was simply a small tent. We ate homemade bread and drank soft drinks,” the male coach said.

“I was wrong when I thought going camping would be boring and pointless,” said Xiao, who couldn’t tell the trend. glamping is becoming increasingly popular among young people and families in China.

Glamping is a combination of two words “glamorous” and “camping”. This trend refers to picnics in the suburbs, people experience having fun and relaxing in large tents, fully equipped like a high-class resort.

Luxury camping has been popular in the West and Japan since centuries ago. But only imported and popular in China in the past few years.

Looking at the lavish tents, Xiao thought of the movie Harry Potter, when wizards and witches entered the shacks, but inside was like a house or a hotel room.

The pandemic has held everyone back, causing travel enthusiasts to change plans. Not allowed to go abroad, many urban dwellers choose high-class camping not far from where they live.

Xiaohongshu, a lifestyle-sharing social networking service, has more than 25,000 glamping-related posts, up about 10% from last year. Here, users share photos and videos of expensive tents, comfortable beds, electrical equipment to high-end camping gear. Some tents even cost up to 10,000 yuan.

Meanwhile, Fliggy, an online service of Alibaba, said the number of orders for camping tents increased 14 times in the past year. E-commerce platform Tmall also reported a 130% increase in glamping-related searches compared to last year. Outdoor coffee machines and antique oil lamps are two of the most sought-after items.

However, this trend is not well received by traditional campers. “They prefer to follow trends instead of focusing on outdoor activities,” said Roger Liu, a guitarist and fan of camping.

Roger said that camping must be poetic, not fussy, ostentatious because that’s a way for people to get close to nature. If you want to enjoy the luxury, look to hotels by the beach. Previously, the male artist had organized a camping trip near a village in Jiangsu province and was annoyed when some tourists went glamping nearby. “They just like to take pictures next to the tent to show off. That’s not real camping,” Roger said.

But some glamping enthusiasts disagree.

“Glamping is a way to meet people, make friends and create a living space that makes you feel good. Instead of just being with nature,” said Vivan Su, who specializes in organizing new camping trips and Tradition, rebuttal.

Running a homestay in Shanghai, Su knew about luxury camping two years ago. She goes camping twice a month, but the young lady does not spend much money on furniture and interior decoration because the items are all handmade.

“Going to glamping doesn’t have to be expensive. I believe that as more people become aware of this trend, there will be more activities to do than taking pictures to show off,” Su said.

Minh Phuong (According to Shine)