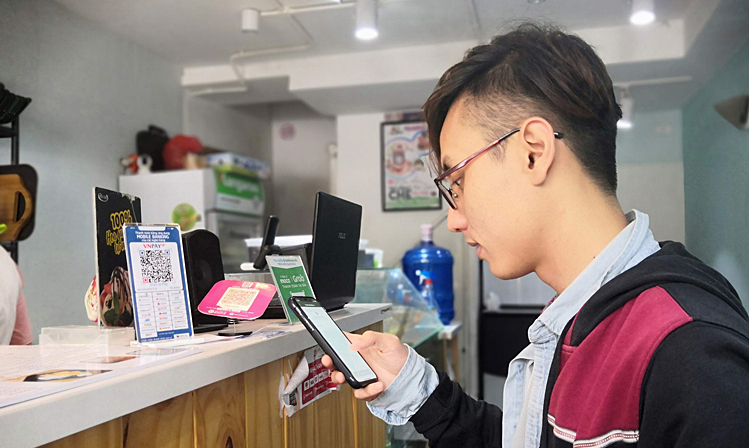 Receiving the bread, asked the seller for the account number to pay, only to find out that the shop only accepts cash, Phuong Thuy was dumbfounded, realizing she did not have any cash.

With no other choice, the 27-year-old girl had to call her friend to bring money to rescue. This is the first time in the past half year that a female office worker in Cau Giay (Hanoi) uses cash. Before that, all purchases from vegetables, milk tea cups to going out and shopping for Thuy were paid by bank transfer.

“I forgot the habit of holding my wallet every time I go out. All I need is a phone with 4G”, Thuy explained. She said that even in situations where it seemed impossible to lack cash such as weddings, funerals or gas stations, it is now possible to transfer money, so it is not necessary to keep money in person.

Thanh Duong, 22 years old, a student at a university in Hanoi also switched to using electronic transactions two years ago. Every month, tuition and living expenses, Duong’s parents send directly to their account to avoid losing them while traveling by train. By the way, tuition, accommodation, shopping… can be transferred directly, so he admits “I forgot there was an ATM in the world”.

“Online payment has crept into every corner of social life, not only in cities but also in rural areas,” commented Dr. Tran Manh Dung, former head of the Banking Academy’s training department. According to him, the pandemic has greatly contributed to changing this life habit of Vietnamese people.

Research on consumer payment attitudes published by VISA company in early June 2022 reinforces Mr. Dung’s statement. Accordingly, 65% of Vietnamese consumers said they carry less cash in their wallets and 32% confirmed that they would stop using cash after the pandemic. To date, nearly 76% of consumers are using at least one e-wallet service and the percentage of card users is even higher (82%).

According to statistics of the State Bank, in the first 4 months of 2022, non-cash payment transactions increased by nearly 70% in quantity, 27.5% in value; transactions via the Internet also increased by 48%, via mobile phones by 97%; via QR code increased by 56.5% and 111.62% respectively. The total number of activated e-wallets increased by 10.37% compared to the end of 2021. The Payment Department, the State Bank added, in the first quarter, payments via mobile channels increased by 198.8% in quantity and 21.9% in value over the same period in 2019. The National Payment Corporation of Vietnam (NAPAS) also said that it currently processes 2.8 million cashless transactions per day at a price worth nearly 21,000 billion VND.

“I am confident to live without cash. Every time I take a bus to my hometown in Nghe An, I always book in advance and pay online. Some e-wallets also get 10-20% or 50% off wallets when booking. bus tickets, movie tickets, buy food,” Thanh Duong shared. Most of his friends have also been “infected with the cashless lifestyle”.

According to female office worker Phuong Thuy, cashless payment is gradually becoming more popular and safer. “Many sellers at the market near my house also started to accept wire transfers, instead of always holding cash with the worry of being robbed or struggling to find a cash register,” Thuy said.

Applying technology to make life simpler, but sometimes she is confused when she encounters a cash-only store or an electronic transaction fails, forcing her to find someone to help. Many times, Thuy was scolded by some sellers as “a few small coins also ask for a transfer”. Not intending to refuse cash, but over the past few months, Thuy has developed the habit of asking before buying. In case the seller only accepts cash, she will find another item to avoid trouble.

Not only young people, but middle-aged people who are not well-versed in technology are also more open to this lifestyle. Ms. Nguyen Hoa, 60 years old, selling chicken at Hoang Mai market (Hanoi) said that many customers ask for money transfer when they do not have cash. “At first, I was afraid because I was afraid of ambiguity and fraud, but the children encouraged me to set up a bank account with a code printed to make it easier for customers to pay,” she said.

In the past, Hoa sold 10-15 chickens a day on average, but since online payment, especially during the two epidemic years, the number of chickens sold has doubled, even tripled both at the counter and delivered. home goods. Some other small traders in the market are also following because customers do not use cash more and more. “Fast transaction, money transferred immediately, makes me feel secure, not afraid of being in debt, overpaying – missing or encountering fake money like before,” the woman said.

Manh Cuong, 60, from Dong Nai started learning electronic payment methods from 2020, when Covid-19 broke out. He asked his daughter to guide and help install an online purchase application to limit contact and avoid infection.

“The first few days were a bit difficult, because there were a lot of operations, but after a few transactions I found it simple, easy and very convenient. Just stay at home, I can still buy everything I want, even send money in savings. save money online instead of waiting in line at the counter,” said Mr. Cuong. In addition, he also tried to send lucky money online to his children who live far away from home due to the epidemic.

“But applying electronic payment methods also needs attention to avoid risks, especially for newcomers,” warned Dr. Tran Manh Dung. According to him, some potential risks may be encountered such as money transfer fraud, sending OTP codes or sending money to the wrong account number.

In Vietnam, electronic transaction fraud also tends to increase. Recently, banks simultaneously warned of new tricks to steal OTP codes to get data, connect e-wallets and make withdrawals. As is the case of the family of Ms. Thanh Ha, 30 years old, Hanoi.

In mid-June, Ms. Ha needed to transfer money urgently, but the bank’s transaction app was faulty, unable to log in. At noon of the same day, a strange number called, claiming to be a bank employee, instructing how to fix it. No doubt, Ms. Ha followed the instructions to log in with the link sent to the phone number, hoping to transfer money soon. After a few minutes, she received a notice that 100 million was deducted from her account. The phone number you just dialed cannot be reached.

“Notify the bank, they guide me to ask for a statement and report it to the police station. But the hope of getting my money back is very low, almost zero. I know I’ve been cheated,” the 30-year-old woman said. sighed age.

According to experts, in order to limit risks from Internet payments, customers should pay attention not to reveal card number, due date and CVV number (usually on the back) of credit cards. If in doubt, contact the bank to close the card and issue a new card. Absolutely do not enter personal information by yourself through strange links … avoid being used by crooks to consume via card.

Phuong Thuy said she will continue to pay cashless when she finds it too convenient. “Any method has potential risks and shortcomings, holding cash can also fall or be stolen. But I prefer a way that is simple, easy to use and in line with the development trend of the times,” said the 27-year-old girl. age said.