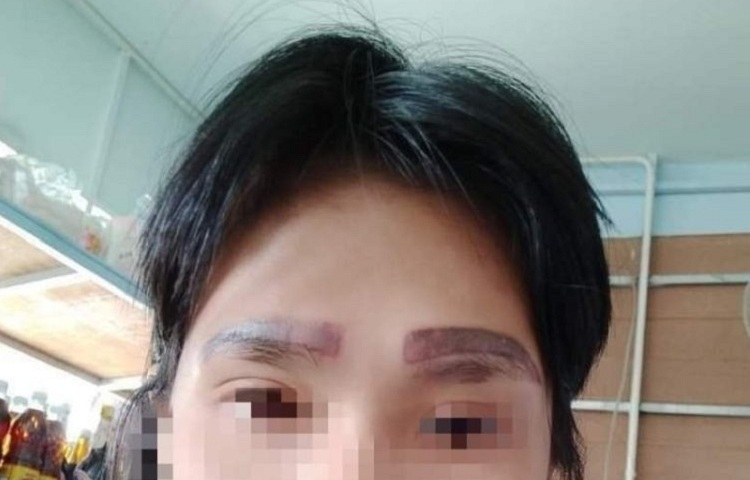 ThailandFor more than a year, Nipapron Meeking has had to live with an additional set of fake eyebrows, located above her real eyebrows, due to a tattoo problem.

The 32-year-old girl paid 41 USD to a small cosmetic shop in Rayong province, eastern Thailand, with the desire to have thick and defined eyebrows.

“I was going on a trip with friends so I wanted to have beautiful new eyebrows. But after the procedure, I looked in the mirror and discovered the disaster,” she said.

Nipapron was shocked and questioned the staff who tattooed his eyebrows. This person promised to fix it the next day. That calmed her down a bit. However, the next day, she panicked to find out that the tattoo shop was permanently closed.

Nipapron was forced to live with 4 eyebrows on his face. The girl is extremely shy and self-deprecating, stays at home more than goes out, almost does not dare to appear in public. She tried to find many tattoo shops but they said the broken tattoo could not be fixed.

After a year of living with two sets of eyebrows, she was promised by a worker named Pattawee Phumkasem to remove it for free. Phumkasem knew Nipapron’s plight online, so he actively offered to help, even though the tattoo removal procedure usually costs more than 400 USD.

After two procedures, by the end of August, traces of false eyebrows remained, but not as bold as before. “I was lucky to find this craftsman. Thanks to him, I was able to have a normal life,” she said.

Cosmetologists have repeatedly warned about problems caused by procedures in unprofessional and unreliable facilities. A few years ago, also in Thailand, a 26-year-old girl had to wear snail-like eyebrows over her eyes. With no money to fix, she posted her story on social media asking for help. Like Nipapron, she is fortunate to have a beautician to help.

Before that, in 2015, young female dancer Polly Smith (UK) went to the eyebrow tattoo salon. As a result, she suffers from severe allergies and is likely to have lifelong scars. Another woman in the UK can’t close her eyes after her eye lift surgery.

In China, in 2019, the number of complaints about plastic surgery received by the Consumer Association of this country increased more than 10 times compared to 2015.

“We found that more than 80% of illegal surgeries are wrong and cannot be repaired. The client (victim) will have deformities for the rest of their lives and many of them have already suffered. the psychological trauma is huge,” said Ai Xiaoyu, an employee of SoYoung, one of China’s largest online communities for plastic surgery patients.