(Sports news, tennis news) The match in the fourth round of men’s singles between David Goffin and Frances Tiafoe was very interesting and balanced.

5th seed Carlos Alcaraz had a very difficult match against 10th seed Jannik Sinner. The pitch was not Alcaraz’s forte and he was unable to take the initiative against a Sinner who had a solid playstyle and knew how to take chances.

The match in the fourth round of men’s singles between David Goffin and Frances Tiafoe took place very attractive and balanced. Both players showed their best qualities and made the match decide after 5 sets and 4h36 minutes of competition.

Norrie had a pretty easy match against American opponent Tommy Paul. This match, the number 1 player of Great Britain only took 3 sets to win. The scores of the sets are 6-4, 7-5, 6-4, respectively, in favor of Norrie.

Djokovic is playing better and better at Wimbledon this year. After winning 4 sets against Kwon Soon Woo in the opening match, Nole defeated Thanasi Kokkinakis and Miomir Kecmanovic, respectively, in just 3 sets. The opponent of the Serbian tennis player is the phenomenon Van Rijthoven, ranked 104 in the world. After winning the Libema Open last month, the Dutchman continued his impressive run of form at Wimbledon. Van Rijthoven defeated Federico Delbonis, Reilly Opelka and Nikoloz Basilashvili, respectively, on their way to the fourth round.

Despite the fact that the two players have never met before, Djokovic is clearly appreciated much more than the opponent. Just playing with the right strength, a victory in only 3 sets is difficult to escape from the Serbian tennis player.

Carlos Alcaraz is having a breakthrough season this year when he won 4 titles at Rio, Miami, Barcelona and Madrid. The Spaniard entered Wimbledon with little preparation, but with impressive performances against Jan Lennard Struff, Tomas Greikspoor and Oscar Otte, the 19-year-old youngster showed the danger on the court. grass. Alcaraz is predicted to have a difficult time against Sinner

On the other side of the line, Sinner is also showing good form this year with a 75% win rate. The Italian has reached the quarterfinals at the Australian Open, Miami Masters, Monte Carlo Masters and Italian Open. Sinner beat Stan Wawrinka, Mikael Ymer and John Isner, respectively, on their way to the fourth round, which was also his first time at Wimbledon. 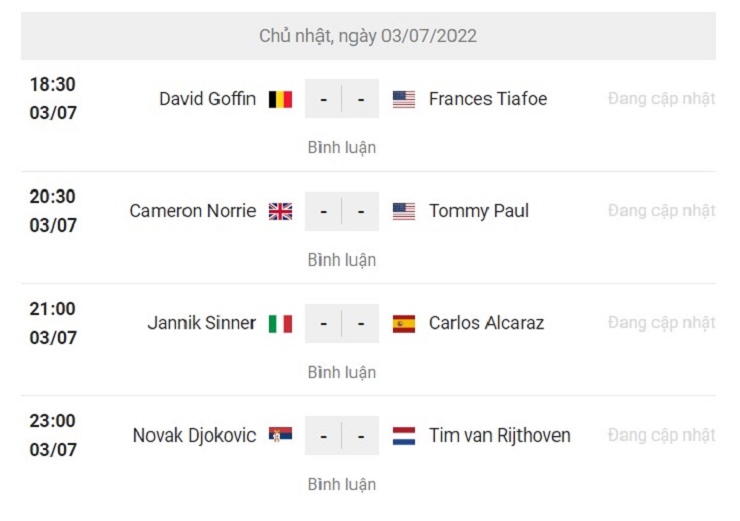 (Sports news, tennis news) The audience regretted that the match between Kyrgios and Tsitsipas could not take place on the center court at Wimbledon.