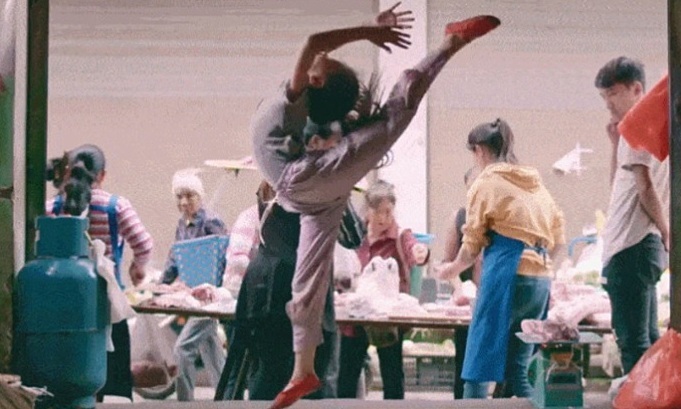 ChinaVideo of Wu Gangyun dancing in her home’s pork stall has gone viral across China, presenting an unexpected opportunity for the little girl.

Wu Gangyun (or Yun’er), 11 years old, from Yunnan started learning about dance four years ago. The little girl taught herself basic dance moves such as back bends and somersaults by watching videos on her mother’s phone.

The teacher was the one who discovered Wu’s talent. “She asked who taught her those moves. I told her she only learned by phone,” said Li Xingqiao, Wu’s mother. The female teacher suggested to Ms. Li that she should take her child to a formal dance course.

At the age of 8, the mother enrolled her child in ballet lessons, which cost $300 a term. However, after the first semester, the family could no longer afford to let Wu continue to attend classes. “My husband works as a truck driver, while my two daughters and I stay at home. The monthly cost of living is about $150. We really can’t afford to send our children to private lessons,” Ms. Li said.

Unable to go to school anymore, Wu continued to imitate through video. At the same time, her mother opened a pork restaurant to earn extra income. Wu often goes there before and after school to help his mother with the sales. Taking advantage of her free time, she practices dancing in a cramped butcher shop.

Ms. Li considers herself to be her son’s most devoted audience. She recorded Wu’s practice and uploaded it to social media. In 2018, when the finances are stable, Ms. Li wants to send her children to dance school again. “I consulted many local dance teachers, but they didn’t want to teach because we were on a tight budget,” the mother said.

The girl’s videos and aspirations went viral on social media and reached Zhang Ping, a professional teacher at the Beijing Dance Association. Zhang and her husband run a project to help impoverished children with dancing talents be trained.

After joining the project, Wu’s skills improved. From 2019 until now, the girl who has been around in a small pork bar has been invited to perform on big stages.