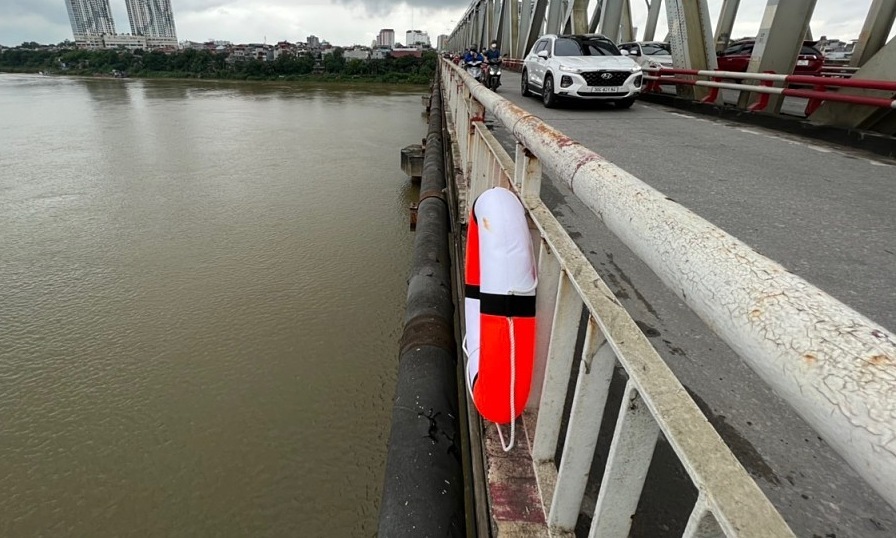 HanoiBecause the volunteer group has not worked and agreed on how to deploy with the management unit of Chuong Duong, Nhat Tan and Vinh Tuy bridges, the number of lifebuoys has been temporarily seized.

On May 19, people passing through a number of bridges across the Red River noticed that the lifebuoys installed by Mr. Nguyen Ngoc Khanh’s volunteer group, 5 days ago, were no longer available. While the buoys on Long Bien bridge are still intact. Many people think that some people lack the sense of stealing.

Exchange with VnExpressOn the afternoon of May 19, a representative of Hanoi Traffic Construction Joint Stock Company, the management unit of three bridges Chuong Duong, Nhat Tan and Vinh Tuy, confirmed that no buoys installed on the bridge had been stolen.

“Because the volunteer group actively suspended but did not work, agreed with the management unit, we were forced to temporarily withdraw. The unit contacted and invited the volunteer team leader to work, but this person was busy with work, The appointment will come next week. Then the two sides will come up with the best and specific coordination plan on the installation”, the representative said. Particularly for the remaining three bridges because they are not under the management scope, the unit does not intervene.

Regarding the purpose of installing life-saving buoys, the representative of Hanoi Traffic Works Joint Stock Company fully supported, “Because this is a good thing, but it needs a specific and reasonable plan, not a quick job. forgotten”.

On May 16, a ward leader of Long Bien district said that he had grasped the volunteer group’s activity of hanging life buoys on Long Bien bridge. “Hunging buoys on the bridge is related to urban civilization. If it is safe to hang, someone is on duty when a bad situation occurs, they release the lifebuoy, which is a beautiful action and should be promoted. But we also need to check and verify some more information,” he said.

Before that, Mr. Nguyen Ngoc Khanh, 35 years old, captain of the swimming and discovery club, together with volunteers, hung 33 lifebuoys on the walls of 6 bridges in the capital including Thang Long and Thang Long. Long, Nhat Tan, Long Bien, Chuong Duong, Vinh Tuy and Thanh Tri, from May 14. Depending on the length, each bridge is arranged from three to five buoys.

This activity is part of the program to install more than 400 lifebuoys on bridges spanning the Red River in the provinces from Lao Cai to Thai Binh. Since May 6, Khanh’s team has installed more than 100 lifebuoys in four provinces of Lao Cai, Yen Bai, Tuyen Quang and Hanoi.

Sharing with VnExpress, Mr. Nguyen Ngoc Khanh said that before installing the lifebuoy, the club actively contacted localities to ask for opinions. “When explaining clearly about the purpose of installing buoys, the club received consensus. Many localities also proposed to install more at bridges that do not cross the Red River,” he said.

Mr. Cuong Ha, 24 years old, one of the people who directly installed lifebuoys, said he had grasped the loss of buoys at Chuong Duong and Nhat Tan bridges. The cause of theft or seizure has not been specified. But he hopes to re-install the buoys on the bridge soon, to avoid tragic incidents.

“Out of more than 100 lifebuoys installed in four provinces and cities, only Hanoi has lost buoys. For other bridges in Yen Bai, Lao Cai and Tuyen Quang, the buoys on the bridge are still intact,” he said. Cuong said.