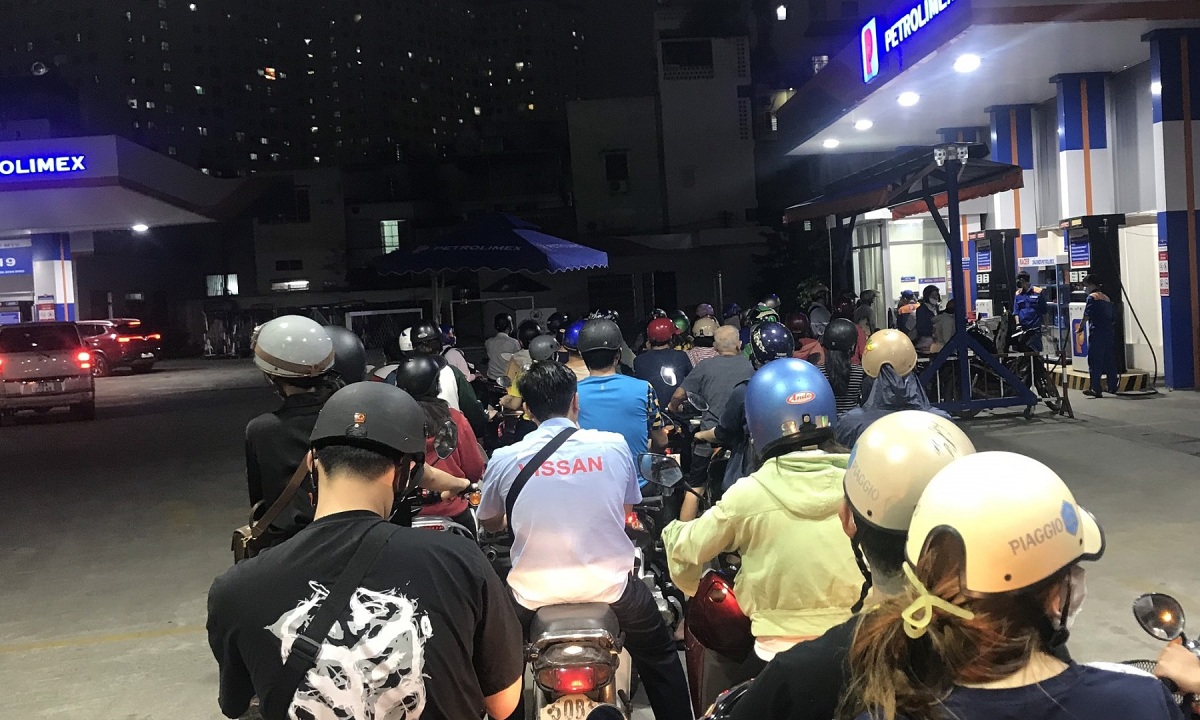 Ho Chi Minh CityNearly a month ago, Ngan Ngoc, 27 years old, spent 5 million VND to ride a motorbike taxi, not having to wait or drive around looking for a gas station.

Ngoc lives in District 8 but the job requires frequent travel between districts. On the afternoon of October 10, she came back from District 3, the car ran out of gas, stopped at a tree near her house and found it full of people waiting. After waiting for more than 30 minutes, it was not her turn, she ran around looking for another gas station, but there were signs “out of gas” everywhere. Running to District 7 in the hope of finding a place to have gas, but after going about a kilometer, the car stopped.

“I’ve never encountered this scene,” she said. More than 11 o’clock that night, Ngoc could only fill up with gasoline, but the store only sold 50,000 VND for each car. In the days that followed, the scene of “waiting forever to fill up with gas” continued to recur.

Obsessed with running out of gas in the middle of the road, the 27-year-old girl decided to switch to riding a motorbike taxi to be more proactive at work. “I know it will cost a lot of money, but I accept it,” said Ngoc, a female employee of a media company. She calculated, 5 million dong for a motorbike taxi has used up a quarter of a month’s salary, while normally it only costs nearly a million to fill up gas.

Ngoc and thousands of people are affected by the shortage of gasoline spreading across many provinces.

Reporter’s quick survey VnExpress On October 31, on Nguyen Thi Thap Street, District 7 there were three gas stations, one hung a sign “out of petrol and oil”, the other two places were crowded with people waiting in line. On National Highway 1A, two gas stations close to each other, one is hanging with the sign “out of gas”, the other is only selling for a limit of 30,000 VND per car.

At the October socio-economic meeting on the afternoon of November 1, Director of the Department of Industry and Trade Bui Ta Hoang Vu reported to the People’s Committee of Ho Chi Minh City that, in addition to 108 petrol stations, there are 4 stores that are asking to stop for repair or procedures. close the door. The suburban area – including the districts of Cu Chi, Hoc Mon, Binh Chanh and Binh Tan and District 12 – has a more serious situation.

Previously, on October 27, Deputy Director of Ho Chi Minh City Department of Industry and Trade Nguyen Thi Kim Ngoc also said that every day, in Ho Chi Minh City, 9-10% of petrol stations have a situation of intermittent out of stock.

Ho Quoc Thong, Faculty of Economics, Ho Chi Minh City University of Economics, said that the Covid-19 pandemic and conflicts in the world have had a double impact on the income and life of the majority of workers. In addition, the consequences of inflationary pressure, rising gasoline prices, and now the scarcity of the gasoline market, make the difficulties pile up.

“The situation of prolonged waiting at gas stations and limited distribution causes loss of time, money and has a heavy impact on psychology. Many people are affected by income and quality of life… just because waiting for his turn to fill up gasoline, even waiting without filling, “said Dr. Thong.

Before this situation, according to Mr. Thong, people will have to choose to endure or change their habits to adapt. “But no matter how they adapt, they still have to add costs, time and resources. The total additional costs or losses due to the instability of the petroleum market to society are very large,” said Mr. Gia said.

Mr. Thong noted that the cost is not only money, but also time, effort and lost opportunities, which will create other psychological and spiritual impacts, even social risks.

The damage that motorbike taxi driver Nguyen Van Hieu, 40, suffered is an example. Income depends entirely on the motorbike, but for many consecutive days, Mr. Hieu stood in line for half an hour and only poured 30,000 VND for petrol. The customer called but was busy queuing or didn’t have enough gas to run the allowed distance, so he was forced to turn off the application for two hours.

“Waiting is a waste of time, but shutting down the app a lot affects income. Don’t turn it off if people wait, poor people,” he said. It’s only been nearly a month, but his income has decreased by about a third like many other colleagues, just because he often has to “turn off the app, run to find a gas station”.

Also having to learn to adapt, for nearly a month now, 40-year-old Nguyen Trung Tuan, from Tan Binh district, has put fueling up as a top priority. “Not yet, I also pour. Whenever I have a little free time, I stop by the gas station,” he said, after one time near midnight, he was able to fill up the gas tank for himself and his wife.

Do Van Dien from Di An, Binh Duong has switched to riding an electric bicycle three weeks ago. His son also rides his bike to school instead of his relatives picking him up. “Save time and protect the environment,” said a man who works for a bank in Thuan An.

On the group “Biking to work” in the past few days, many members said that they would choose bicycles as a means of transportation to work, when gas prices increase, it is rare. Phuong Chi (Hanoi), the group’s administrator, said that from July until now, the group’s members have increased by more than 1,000.

“Although the participants in the group will not necessarily ride bicycles, it shows that they have paid more attention to this vehicle, at a time when the scarcity of gasoline appears,” she said.

Nguyen Hoai Nam, 30 years old, working for a foreign technology company in Ho Chi Minh City, switched to working from home online. He said, the first period of October was really crisis. Nam lives in Nha Be, every morning he has to drive nearly 10 km to the company in District 10. Because he works far away, he always prepares a full tank of gas.

On October 9, Mr. Nam guessed that at the end of work, there would be a lot of people on the way home from work and would stop by to fill up with gas, so he chose to stay at the company to work overtime. He waited very late to go to the gas station to avoid waiting, unexpectedly when he arrived, the place was empty, the place was crowded with people queuing. Nam took a risk, waited to run straight home the next morning. But the situation was not much different from the night before. “I waited in line for an hour and only poured 50,000 VND. I was late for work that day,” he lamented.

Having to queue for gas every day, both frustrating and affecting his work, Nam asked the company to let him work from home.

Ngan Ngoc said that if the shortage of gasoline lasts for a long time, she will still take a motorbike taxi, accepting a loss of 5 million VND in savings per month.