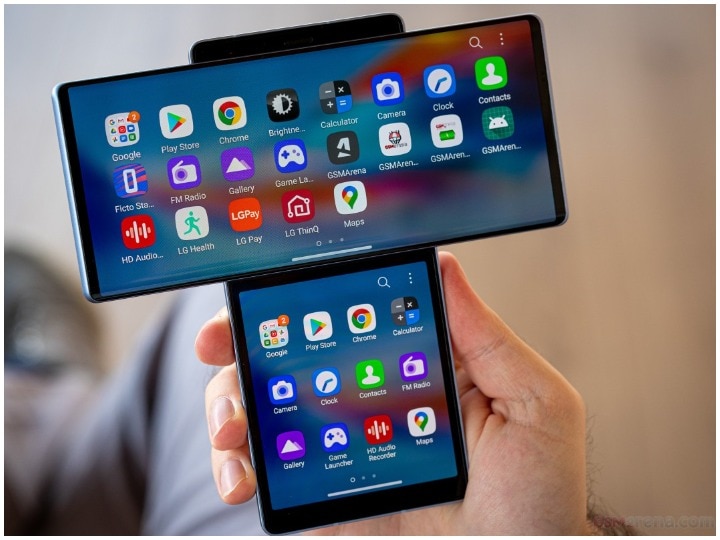 The speed of technology is increasing rapidly. New types of smartphones are being seen in it. Foldable phones, roll-out phones are coming in the market. Meanwhile, South Korean company LG has launched the screen rotating phone LG Wing in India. Its dual screen design is its specialty. One of these screens rotates 90 degrees clockwise, creating a T-shape design. The special thing is that you can use both screens simultaneously.

cost
In India, the company has fixed the price of this special phone at Rs 69,990, which is the price of its 128GB variant. Right now its 256 GB variant has not been launched here. In this, you will get two color options. Which includes Auror Gray and Illusion Sky. If you want to buy it, you can buy it from 9 November.

specification
The LG Wing is a dual SIM smartphone that runs on the Android 10 operating system. The Qualcomm Snapdragon 765G processor has been used in this phone. There are two screens in it. In which the primary screen is 6.8 inches, which is a fullHD + P-OLED display. Apart from this, the phone has a 3.9-inch FullHD + G-OLED secondary display. The phone has 8GB RAM and 128GB internal storage.

The camera
Talking about the camera, the smartphone has a triple rear camera setup with a 64-megapixel primary sensor, a 13-megapixel ultra-wide lens and another 12-megapixel ultra-wide lens. It is equipped with Gimbal Motion Camera feature that controls the camera angle through the virtual joystick provided in the secondary screen. This phone has a 32 megapixel pop-up front camera for video calling and selfie. At the same time, 4000mAh battery has been given to power the phone, which also supports wireless charging.

OnePlus 8 Pro will compete
LG Wing is believed to compete with OnePlus 8 Pro. Its 12GB + 128GB variant costs Rs 59,999. For performance, it has a Qualcomm Snapdragon 865 SoC processor and X55 5G chipset. This phone has a 4,510mAh battery with 30T wrap charge. For connectivity, this phone has features such as 5G, 4GLTE, Wi-Fi, Bluetooth, GPS and USB port Type-C. Diwali Sale: Flipkart sale starts today, getting this item of your need at very cheap price

Does your Android phone also face this problem? Know how to fix android mobile