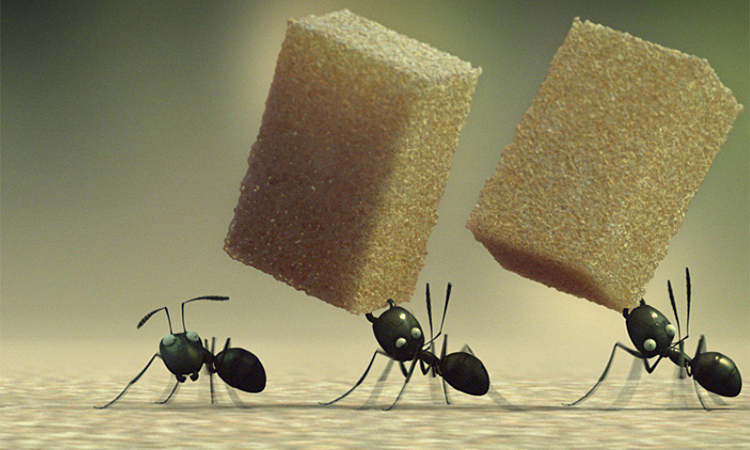 Observing the activities of ants, scientists from Hokkaido University (Japan) found that there are very lazy ones, but in difficulty, they are the ones who find a way out for the whole colony.

In normal times, these sloth ants do almost nothing, mainly watching their fellow humans. Biologists call these numbers “lazy ants” and mark them off.

Interestingly, when the team cut off the food source, the normally diligent ants immediately became chaotic, while the “lazy ants” calmly led the whole colony to a new food source. .

It turns out that “lazy ants” are not lazy, but they spend most of their time observing. This is the basis for the birth of the famous “Lazy Ant Effect”.

In the book “The Speed ​​of Thought” by Bill Gates and Collins Hemingway, published in 1999 tells a story.

In a small town in Canada, there lived a young man who loved to write. He writes every day, but the novel he writes no one cares. This person went to ask the teacher to find out the reason.

The teacher asked him in turn what to do in the morning, noon, afternoon and evening. The young man replied, every day except when he eats and sleeps, he writes the rest. “So when do you think?” asked the teacher. The teacher continued: “My hard work is just being constantly busy for a long time, it’s nothing difficult to do. The hard thing is thinking, without thinking your novel is. Without a soul, without thoughts, your diligence means nothing.”

An article titled “Confusion in Our Generation” once caused a stir in Chinese public opinion, stating: “Most people appear to be diligent, but many of them are lazy in their thinking. Thinking. Staying up all night reading books, sleeping only a few hours a day, having no time to rest… is nothing to brag about because anyone can make a hundred times more effort than you.”

A lazy thinker will often make things fall into mediocrity. Getting rid of low-quality diligence and forming a habit of thinking is the first step to changing your own life.

Sendhi Muainathan, an American professor of behavioral and computational sciences at the University of Chicago’s Booth School of Business, once said, “For any organization, it’s very important to keep a break, it’s not wasting resources but making the system more productive.As individuals, we need to give ourselves time to rest, use that time to think, recharge. energy, self-enhancement.”

One of China’s most influential young writers, Ly Thuong Long, used to be a teacher. In his final year at the school, he proposed to the principal not to work weekends. A colleague advised him to think again, because it would cost him a decent class fee, but Ly remained adamant.

On weekends, when other colleagues are busy with tutoring, Ly stays at home to read books, watch movies, and write down what he likes in a small notebook. Not long after that, the school reduced its payroll, many colleagues were unemployed, and the situation could not be reversed. And Li then became a famous author, earning several million yuan a year.

Recalling this in the article “Busy, but not busy,” the writer said: “No matter how busy you are, you have to give yourself some free time. At these times, you can think about whether there is a direction. Is there a better way to go and is there a better way?

“Just like in a team, there is always one or two leaders who are free, because they are responsible for thinking and giving better direction to people,” asserts the writer.

The depth of one’s thoughts determines the height of one’s life. The French mathematician, physicist and thinker Blaise Pascal wrote in The Caprice: “Man is but a reed, the most fragile thing in nature, but he is a thinking reed The level of thinking and thinking determines a person’s position in society”.

People, only when they make room for thinking in their busy lives, can they listen to the voice of their souls and find the most valuable path in life.