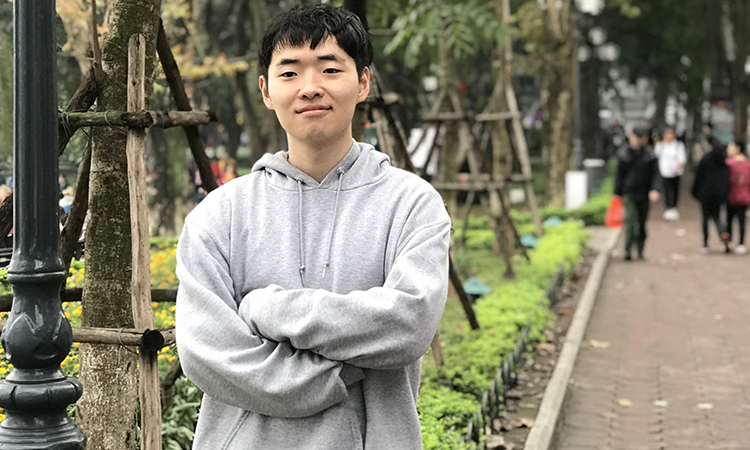 KoreaReluctantly into Vietnamese, Jeon Hyong Jun did not expect that this foreign language would one day become “love” and “his destiny”.

While at school, Jeon Hyong Jun’s phone suddenly rang. As soon as he picked up the phone, on the other end of the line, a Vietnamese-speaking woman said, “Please help me! I can’t stand this husband anymore”.

The student of Sogang University (Seoul), a volunteer, Vietnamese interpreter of the Center for Foreigners in Korea (BBB Korea) is too familiar with these kind of “for help” calls. immediate problem. The Korean – Vietnamese couple has just been married for three months, but they have differences in language, so they often contradict. During the next three hours, Jeon Hyong Jun (Vietnamese name is Tuan Jeon) both works as an interpreter and plays an “ambassador” to explain to the couple about the cultural difference between Korea. and Vietnam and the resolution of married couple conflicts. Ended the call, as both of them said their thanks in tears. “Listening to them, I just want to cry along,” the 25-year-old said.

This Vietnamese bride is just one of more than 2,000 people who have been helped by Tuan Jeon through the free consultation calls of BBB Korea. The young man always believes that his work has partly solved the difficulties, alleviated the loneliness and fear of Vietnamese people when they first arrived in the countryside.

“Vietnamese came to me as an arrangement of fate,” Jeon laughed and talked about her impromptu journey to Vietnam. In 2011, young Jeon enrolled in the English department of the Chungnam Foreign Language High School in Seoul but did not get enough points. Not wanting to change schools, Jeon Hyong Jun “closed his eyes” and chose to study Vietnamese. Even his parents were not satisfied and thought that the fact that he chose to study Vietnamese at that time was odd and difficult to understand. But her sister encourages: “Doing what others doesn’t do is interesting!”.

Jeon’s early days of getting used to Vietnamese was a real challenge because “what language has six tones and five marks”. The 15-year-old boy was depressed and surrendered, not bothering to study.

After 2 months, the class welcomed a group of Vietnamese youth to exchange. Previously, the image of Vietnam in Jeon’s imagination was often associated with poverty and backwardness. But in a short time, the Vietnamese surprised the 10th grade student by their very wide understanding of Korea. Everyone enthusiastically teaches the Vietnamese pronunciation, and learns Vietnamese songs. “I myself learn Vietnamese without learning Vietnam, while people know a lot and speak very well about Korea”, Tuan Jeon suddenly felt embarrassed. From that point on, he opened his heart more and promised himself “he will become the best foreigner in Vietnamese”.

To increase his vocabulary, this guy immediately bought a thick dictionary, learning dozens of new words every day. Students in the dormitory are prohibited from using their phones, so he secretly creates a Facebook account on the school’s computer, makes friends with thousands of Vietnamese, and regularly chats online. “Vietnamese friends on Facebook are very enthusiastic. Knowing that I am learning Vietnamese, they are patient, talk and guide,” he recalls. With this method, Jeon’s Vietnamese improved day by day. Sometimes talking to people, encountering slang words that don’t understand the meaning, he writes it down in the notebook and then brings it up to ask the teacher. During the high school years, the Korean boy was so engrossed in the Vietnamese language that he was teased by his friends that “it is difficult to get into university because he does not see any other subject”.

During his high school years, Tuan Jeon also wrote a letter to the Vietnamese ambassador in Korea sharing the story of learning Vietnamese. After that, he was invited privately to the embassy to talk and the ambassador also volunteered to teach at the department. Next, he wrote a letter with the theme “Vietnam, my destiny” to the newsrooms in Vietnam to promote the theme of Korean high school students learning Vietnamese.

Going to university, Tuan Jeon entered the Faculty of International Korean Studies and Communication of Sogang University. In order to have the opportunity to use Vietnamese regularly, he registered as a BBB volunteer, specializing in receiving consultation calls, supporting Vietnamese people to integrate into their new life in Korea. “Because it is a hot line, calls can come anytime, midnight, in class, walking on the street or eating meals …”, Tuan Jeon said.

From 2014 up to now, Tuan Jeon has received a total of more than 2,200 calls, helping to solve problems in daily life such as hospitals, police stations; situations of getting lost or losing your wallet on the subway; spousal conflicts due to language differences …

The longest “call” for support lasted for 2 months, came from a Vietnamese patient. Tuan Jeon had to listen to the doctor’s instructions about surgery schedule, medicine, necessary attention … and then translate it into Vietnamese for the patient. Two days later, due to the completely randomized call from BBB, Jeon lost contact with the patient. When reconnecting, the operation took place but the health of Vietnamese men was very weak. The student at Sogang University decided to publicize his personal phone number although this was contrary to regulations. Since then, every day he and nurses write specific instructions for Vietnamese patients such as eating, drinking, injections … on paper.

During the two months in the hospital, he called every day to inquire about the strange man’s situation. Upon discharge from the hospital, the Vietnamese man called to thank: “I will never forget your help, your warm feelings and your kindness”.

Not only passionate about Vietnamese, Tuan Jeon is also “addicted to Vietnam”. Nearly 10 years, you has more than 20 times to Vietnam. At the end of the third year of university, he decided to reserve to go to Vietnam to experience. Just arriving in Hanoi, he “ventured” to write a cover letter at the Voice of Vietnam to build a news and reportage program in Korean. The young man is also prioritized by Radio to produce an exchange program with the audience, broadcast every Sunday. At that time, many people gave Tuan Jeon the nickname “Hanoi Boy”.

In Vietnam, you are like “a fish meets water”. Jeon likes to eat vermicelli beans, pear la pear iced tea on the pavement, is confused with the street vendors. Although he does not know how to ride a motorbike, every time he moves “Hanoi Boy”, he chooses a motorbike taxi to watch the street, looking at Vietnamese people at close range, and “talking” with the driver. Jeon’s Vietnamese is so fluent that she was asked to present documents many times because no one believed it to be a foreigner. “In this life, I am Korean, but my previous life is definitely Vietnamese”, the witty guy added whenever he was confused.

After a year in Vietnam, in February 2020, Tuan Jeon returned home and continued his final year at university. During the translation of Covid-19, despite his busy studies, he continued to work as a volunteer at BBB Korea, most of the calls came from medical examination and treatment centers and screened for suspected infected people.

In September 2020, from the money saved, Tuan Jeon set up his own scholarship fund to support 6 students in difficult circumstances in Ho Chi Minh City to finish high school. financially, he also regularly exchanges and talks with children online. The 25-year-old hopes that when he graduates and has a stable job, the number of children receiving scholarships from the fund will increase.

“What I do comes from my heart because Vietnam is my destiny,” said the Korean man.