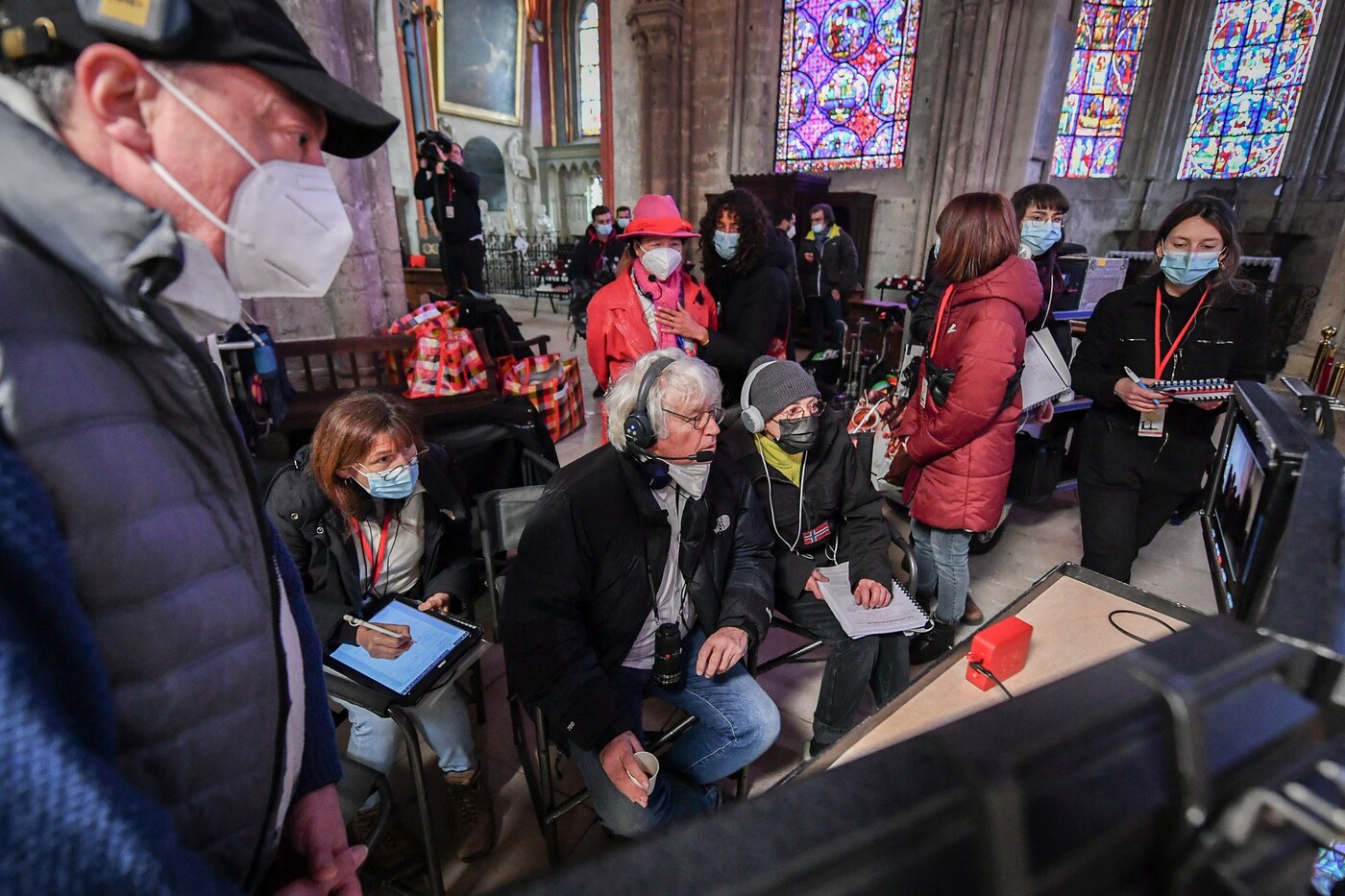 Under its vaults perched at dizzying heights, Amiens Cathedral, one of the side naves of which has been closed to the public, resonates with unusual agitation that day. In one of the seven chapels of the ambulatory, Jean-Jacques Annaud took his place under a makeshift installation to watch on the combo (the return image), the catches of this early morning.

He chose to shoot, here, one of the episodes of the rescue of the treasure in the heart of the fire of Notre-Dame, because the places, in particular the corridor which leads to the sacristy, have a great similarity to those of the building. Parisian. Just as he found in the cathedral of Sens the paving of the nave and, in that of Bourges, the double ambulatory.

→ READ. “Notre-Dame is burning”: Jean-Jacques Annaud wants to combine the emotion of the spectacle with documentary rigor

“Jean-Jacques Annaud is very attached to the realism of the images, we had to find places that work aesthetically and allow us to shoot scenes in the length, even if there is behind all a digital work to perfect the illusion” , explains François Pulliat, the general manager. A large part of the film’s sets were reconstructed in the studio, in Saint-Denis and Bry-sur-Marne, in particular for the fire scenes.

But the director wanted to shoot as much as possible in real churches. “There is an architectural emotion, a soul linked to its sacred character, which it is impossible to reproduce in the cinema”, explains the latter, confessing a real passion for places of worship nurtured since childhood. “I photographed them and I undertook a sort of review of the lesser known churches in France, he says, laughing. It’s not for nothing that I shot The name of the rose and Seven years in Tibet in monasteries! “

On its control screens, the same sequence is repeated. We see a close-up of the chaplain of the Paris fire brigade, recognizable by the pectoral cross embroidered on his uniform, quietly snuffing a dose of tobacco before rebuffing an officer who presents him with the bad crown of thorns saved from the flames. “It’s a decoy, a facsimile, an“ evocative plant assembly ”, not the crown of thorns, not the real one! I am a knight of the Holy Sepulcher, I have held it every year in my hand, the crown! », He is indignant in front of the dumbfounded firefighter before explaining to him that the real relic is in a vault of the vault of which one must find the key and the code. The dialogue is interrupted by a huge crash, the door behind them slams shut. The arrow has just collapsed.

“The anecdote is true”, hastens to clarify Jean-Jacques Annaud by getting up to give some indications to the actors. With nuances, however. Among the dozens of versions of the same episode, he chose the one that seemed to him “Cinematically the truest”. 95% of his film is based on real facts, he says.

“Reality is rich enough in surprising stories not to have to invent any”, specifies the director who took more than a year to build the scenario from hundreds of testimonies and meetings. “Of course, it’s fiction and there are some scriptwriting freedoms, concedes Sergeant Damien, adviser to the Paris fire brigade on the set, but there is nothing extravagant. What is important is credibility. “” This is not a docu-fiction, hastens to specify Jean-Yves Asselin, the production manager, but an extremely documented fiction. “

Show on screen what has not been seen

The ambition of this choral film, which follows a few key characters who intervened on the scene on the night of the fire, is to show “A truth often ignored by most people; they saw the fire from the outside, I will show them what happened inside, bring to life what was not seen and sometimes what was not known ”, explains the director for whom the reality in this precise case is better than any fiction.

Who could have invented, he says, that out of the first group of four firefighters to arrive on the scene, two had never known the fire and two were women, while they are an ultra-minority among the sappers- Paris firefighters? “It will be moving, spectacular and true at the same time, he enthuses. And in addition it is a drama with suspense ending rather well since the building was saved and there were no deaths or serious injuries.. “

All the ingredients were therefore there to please this lover of big-show films, of whom he has since made himself a specialty. The fire war in 1981 and which have not always received a good critical reception in France. Jean-Jacques Annaud had not toured in his country since Headbutt in 1979, over forty years ago. It is Jérôme Seydoux, the co-president of Pathé, who came to seek him to propose to him to make a documentary on the subject. He immediately saw the potential for fiction that the story contained and what it could bring to this event, which was watched live on television by spectators around the world.

An unusual level of requirement in French productions

“Beyond the Christian symbol, it is a place of prayer, a sacred place since very ancient times which threatened to disappear. I think that’s what moved people at a time when, deep down, our society lacks spirituality. The fire of Notre-Dame is the sacred that burns and that is what I am going to show. “

And for that, nothing beats according to him the means of the cinema which have the power to multiply tenfold emotion. “ Films move because they speak to the heart and not to the brain, that’s the difference between understanding and feeling. “ The filmmaker nevertheless launched an appeal to collect images shot that evening by TVs and tourists from all over the world. He received 3,500, some of great quality and completely new. They will only constitute 5% of the film but are obviously irreplaceable.

With a confidential budget, estimated between 16 and 20 million euros, the film is intended for the international market and for large screens equipped with all the most advanced systems of sounds and images in order to hear the slightest crackle or rumble perceived. that night by those who fought against the fire.

“ Jean-Jacques Annaud has a level of requirement that we rarely find in French films, notes Jean-Yves Asselin who holds the purse strings. But all his films are carefully prepared and he respects financial constraints. Every euro will be on screen. “ By the time the filming ends, the filmmaker is satisfied. “ The only surprise is that it turned out so well, he said. But when the shooting is successful, the editing is no more than a formality. “ The film is expected to hit screens in 2022.

Notre Dame of Paris, a documentary by Gédéon and Jules Naudet, which tells the story of the night of the fire through the testimonies of those who lived it, was broadcast on TMC on April 13.

Netflix is ​​producing a six-part documentary series, The Part of Fire, directed by Hervé Hadmar. A choral story written with the collaboration of Romain Gubert, co-author of The Night of Notre-Dame by those who saved it (Grasset, 2019, 234 p., € 18).

A four-episode mini-series project in English, adapted from an investigation by New York Times on the disaster, was announced in 2019 by producer Philippe Rousselet but has still not been successful.