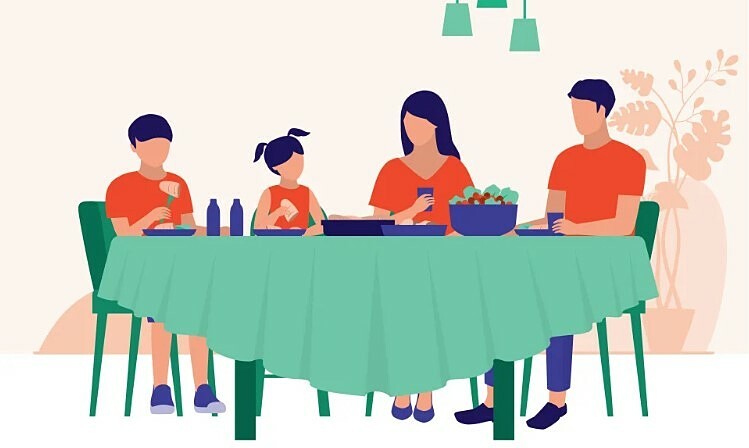 Most studies show that having dinner together every day of the week is beneficial, especially for children.

A 2012 survey by CasaColumbia (American Anti-Drug Addiction Organization) showed that there was a correlation between having dinner with the family and children who drank less alcohol, smoked, used recreational drugs, and had an eating disorder. , depression, teenage pregnancy and obesity.

However, the number of dinners together did not play a decisive role. Experts say that the quality of the interactions is much more important than the quantity.

Anne Fishel, a family therapist, professor at Harvard University, co-founder of Family Dinner Project (Family Dinner Project) affirms that spending quality time with family, when everyone is relaxed and happy is much more important than the number of dinners people have together. If family stress levels are high after a difficult day, experiences together in the evening may be less positive.

Margaret Mair, a teacher in Salt Lake, Utah, is a mother of two. She realized the need to be flexible in the process of implementing the rule “the whole family gathers for dinner”, because the children are busy with their studies and extracurricular activities. What’s important, she says, is that dinner becomes a positive end to the day, rather than forcing it as a rule. Positive and meaningful interaction is an important key, giving everyone the opportunity to share emotions, laughter, experiences of the day… together.

Dunn, an American housewife, chooses to focus on times like taking her kids to school to connect and spend quality time during the day with her kids. Along the way, she said, they had random, funny, memorable conversations in the car. Although the time is not long, but she thinks it is what all family members look forward to.

According to experts, the key benefit of family dinner comes from talking and sharing. No matter what time or circumstances you connect with your children, as long as you share, everyone will be happy and satisfied.