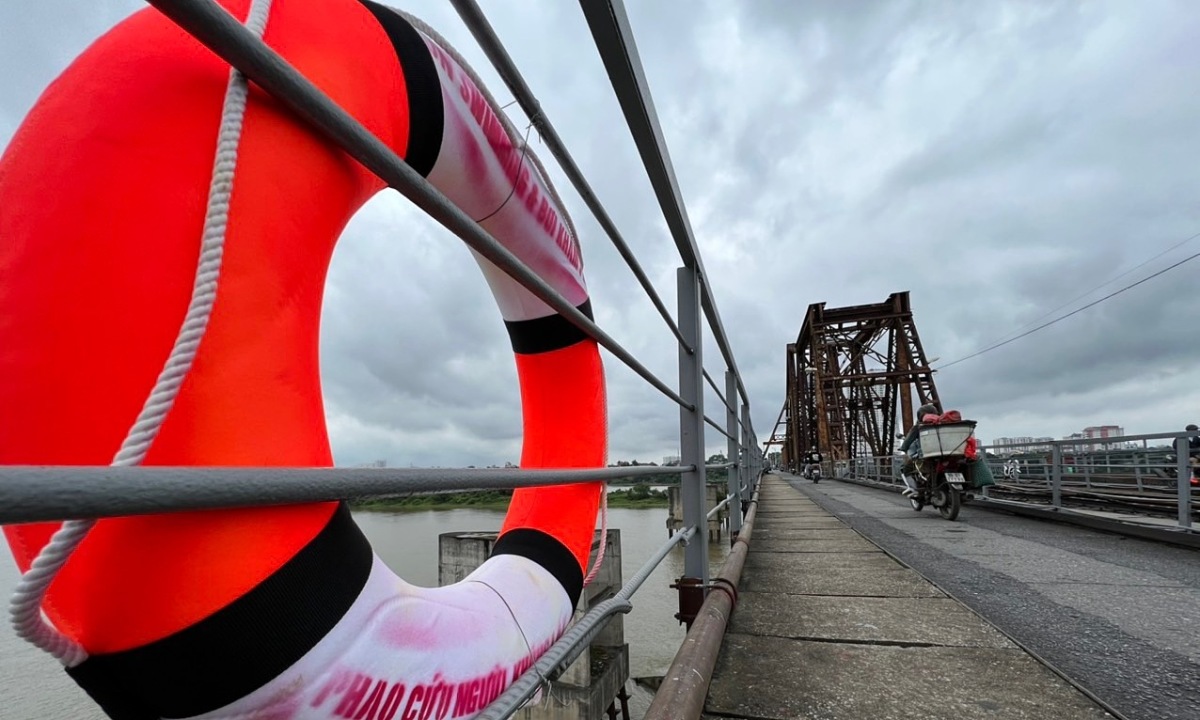 HanoiFrom May 6 to 15, Mr. Nguyen Ngoc Khanh’s volunteer group installed more than 100 out of 400 lifebuoys on bridges spanning the Red River in 10 provinces.

At noon on May 14, Mr. Khanh, 36 years old, and 10 volunteers carried more than 30 buoys, tied on the walls of 6 bridges spanning the Red River in the capital. He said, this is an idea that has been cherished for a long time, so he discussed it with members of the swimming club and decided to implement it, after consecutive drowning incidents in the past time.

“I want to provide tools for drowning people, who want to save lives and have more hope of living instead of just standing on the bridge shouting, or only regretting when jumping down,” said the 36-year-old man.

The program to install lifebuoys on the bridge has been implemented since May 6, with a plan to place 400 boats on bridges spanning the Red River from Lao Cai to Thai Binh. After two weeks, Khanh’s club installed more than 100 lifebuoys in four provinces of Lao Cai, Yen Bai, Tuyen Quang and Hanoi.

In the capital, the group arranged 33 buoys hanging at 6 bridges, namely Thang Long, Nhat Tan, Long Bien, Chuong Duong, Vinh Tuy and Thanh Tri. Depending on the length, each bridge will arrange from three to five buoys. The cost of buying equipment is contributed by members of the swimming club.

To deploy, members often have to gather at the foot of the bridge and then walk up. Tools include several wire rods and pliers. “We try to install it compactly, safely enough so that the float won’t move or inflate, but it’s also easy to remove in an emergency situation,” Khanh said.

As a spontaneous activity, before installing the lifebuoy, Mr. Khanh proactively contacted the local authorities for advice. “When explaining clearly about the purpose of installing buoys, the club received consensus. Many localities also proposed to install more at bridges that do not cross the Red River,” he said.

Ha Cuong, 24, from Lao Cai, has joined Khanh’s Discovery Swimming club since February this year and is very supportive of the activity of hanging lifebuoys on the bridge. “I find this to be a very meaningful activity, especially in the summer when the number of drowning incidents is high. This happens to adults, children, swimmers and rescuers. I hope. This model can be replicated in many places,” Cuong said.

A ward leader of Long Bien district said he had grasped the volunteer group’s activities of hanging life buoys on Long Bien bridge. “Hunging buoys on the bridge is related to urban civilization. If it is safe to hang, someone is on duty when a bad situation occurs, they release the lifebuoy, which is a beautiful action and should be promoted. But we also need to check and verify some more information,” he said.

On the afternoon of May 15, Ha My, 27 years old, in Hoang Mai district, crossing Vinh Tuy bridge, suddenly saw the appearance of lifebuoys. The girl found it strange, so she found out. “When I learned about the lifebuoys installed by a volunteer club to save people in an emergency, I was moved because somewhere in life, kindness still exists,” My said.

Not only hanging lifebuoys, Khanh’s volunteer group also organized a series of activities to raise awareness of students and people about drowning prevention, free swimming lessons, first aid for drowning people, etc. in 10 localities along the Red River, from Lao Cai to Thai Binh. Up to now, the group has deployed activities in four localities, equipping nearly 700 people with skills, of which 70% are students.

After a month of launching and two weeks of planning, Mr. Khanh’s club attracted more than 50 volunteers registered to participate, including 10 core people. The group works on weekends, the program is expected to end in July.

“Swimming in rivers and streams is completely different from swimming pools. If people are not equipped with knowledge and survival skills, it is easy to be in danger. Therefore, we want to impart information and practical skills to as many people as possible. The more people the better,” Khanh said.