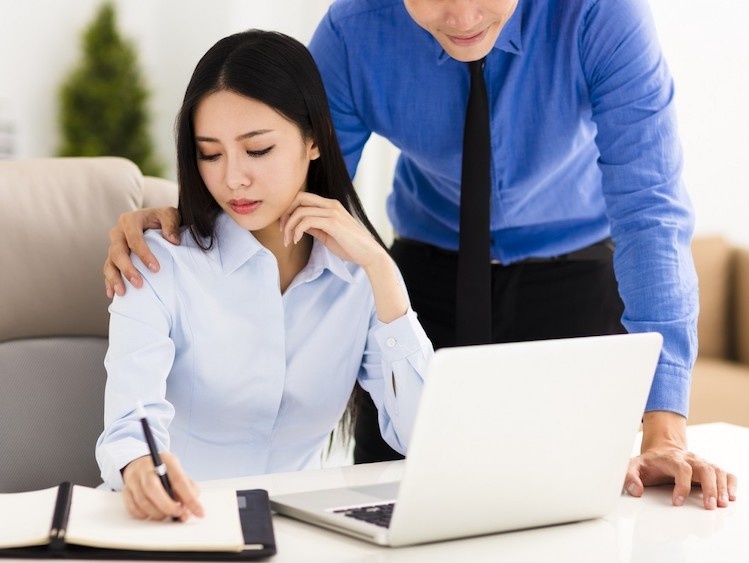 It is difficult to find sympathy from those around, the psychology of blaming the victim or proving the behavior that causes victims of sexual harassment to choose a silent solution.

When she first came to meet the director at her new workplace, Huyen was “scanned” from head to toe and she suddenly felt insecure when the man’s gaze stopped on her chest. The 22-year-old girl was embarrassed, trying to end the greeting quickly. When Huyen walked out of the room, the boss suddenly called back: “We still see each other a lot”.

Since that day, Vuong Huyen, an employee of a trading company in Hanoi, always caught the director’s eyes whenever he passed her seat. Many times as an excuse to sign papers in a private room, this person intentionally touched sensitive areas such as thighs, buttocks, even put his hand on her waist and then let out vulgar words hiding under jokes. At such times, Huyen tries to avoid it, not daring to speak loudly or shout to others, partly because of shame, partly because she is afraid of losing her job, because she has just been hired.

Hoai Thu, 25 years old, an employee of a real estate company, often has to receive guests with her superiors. One day, after finishing the drinking party, the boss did not take her back to the company, but parked in front of the roadside motel, bluntly suggested: “You can say whatever you want, provide or buy your own house. Just fine. afternoon you”. Faced with the rude request, the young girl resolutely demanded to get out of the car. “That day, my mind was confused, I didn’t understand how I got home,” Thu recalled.

Recently, the boss often sends sensitive photos and clips via text message. Thu fell into a state of depression and obsession every time she had to go to the company. Although she wanted to share this story with her colleagues, she was afraid of being blamed, afraid of other people’s judgment, “It has to be like that, the boss is like that”.

Mentally tired, the working environment is not safe, she wrote a resignation letter.

According to lawyer Nguyen Hong Thai, Head of Hong Thai Law Office, Huyen and Thu’s case is sexual harassment in the workplace. This is the use of sexual acts or words to damage the honor and dignity of another person. This behavior is offensive to the opponent, not accepted or desired by them.

Mr. Thai emphasized, “office” does not mean limited to offices. It can be any place where employees work as agreed or assigned, a space related to work such as social activities, seminars, business trips…

Sexual harassment in the workplace is the most common form but the least exposed. The report of the Ministry of Labor, War Invalids and Social Affairs shows that the majority of victims of harassment in Vietnam are women (78.2%) and have a relationship with the harasser such as colleagues, superiors, superiors. subordinates or people who have the ability to dominate and put pressure on their subordinates. The person who is harassed because of this dependence does not dare to resist or resists very weakly.

In 2019, a survey by ActionAid in collaboration with the Vietnam Women’s Academy among nearly 1,000 female garment workers in Vietnam showed that about 88% had experienced verbal violence or harassment; 34% were harassed, physically infringed; 29% were harassed by nonverbal means such as sexual gestures; 10% threatened to terminate the contract, keep salary if denounced or reacted; 10% were promised sex for a promotion.

There are many reasons why this problem is difficult to rule out. “One of them is that victims often choose to be silent, suffer because of fear, fear of scandal, fear of losing their jobs,” said lawyer Nguyen Hong Thai, emphasizing that the most common mistake made by victims is: they want to avoid trouble and hope silence will prevent the subject from repeating the behavior.

But according to Dr. Khuat Thu Hong, Director of Social Development Studies (ISDS), the biggest reason why sexual harassment behaviors have not come to light in Vietnam is the lack of sympathy and the tendency to blame sexual harassment. blame the victim. “When the story got out, many people often asked the question: Why was only that girl harassed?”, Ms. Hong gave an example.

“Because of the malice of public opinion, victims often feel isolated, affecting their lives and honor; with little sympathy but suspicion, the blame is too heavy,” Ms. Hong shared. This is one of the reasons that when the abuse is more serious, the victim tends to “dig deep and suffer alone”.

Lawyer Diep Nang Binh, Head of Tinh Thong Law Office, has witnessed many victims of sexual harassment at work experiencing psychological crisis, keeping the story secret for a long time, even dozens of years. five. Many people have feelings of guilt, fear, and panic, leading to self-harming behaviors.

However, when a few victims dared to speak out, they were blamed, blamed for their dignity, personality, suspected of self-serving motives… Even when discussing this issue, a surplus The commentator also recognized it as “fun, not serious”.

In a survey on VnExpress about sexual harassment in the workplace, 13% of readers believe that sexual messages and jokes are not harassment; 14% chose to remain silent when asked what they would do if they were harassed at work.

Ms. Le Thi Lan Phuong, program officer of UN Women’s End Violence Against Women program, said that the actual number of consultations with students and students does not reflect the situation of sexual harassment. education because “many female students are afraid that when they speak out they will be famous, afraid of not being able to get a husband”.

Lawyer Diep Nang Binh said that, in addition to the above reasons, sexual harassment in the workplace is also difficult to prove the behavior and consequences. Many incidents of harassment took place in areas that were out of sight, with no one witnessing. If denouncing, in addition to the possibility of being fabricated, the victim is also very afraid of being threatened by the perpetrator, taking revenge… This will discourage many victims.

“However, silence is not the solution to solve the problem completely,” Binh affirmed. In the workplace, harassed workers can seek the help of organizations such as trade unions, women’s unions, and management to request resolution. For serious infringements, it is possible to report to the police.

If harassed, calmly figure out how to stop the harasser’s behavior. The panic and fear of the victim sometimes become a trigger for the perpetrator’s “beast character”.

Until now, when thinking about the past incident, both Hoai Thu and Vuong Huyen feel regretful. “I should have bravely denounced the culprit instead of quietly resigning as my own fault,” Hoai Thu said. She blamed herself if she was more courageous and brought the case to light, it would create a good social effect and provide spiritual support for lonely victims like herself.

“Maybe the perpetrators aren’t handled the way I want them to, but at least they can’t just hang around and continue to harass others,” the 25-year-old said.

* The character name was changed