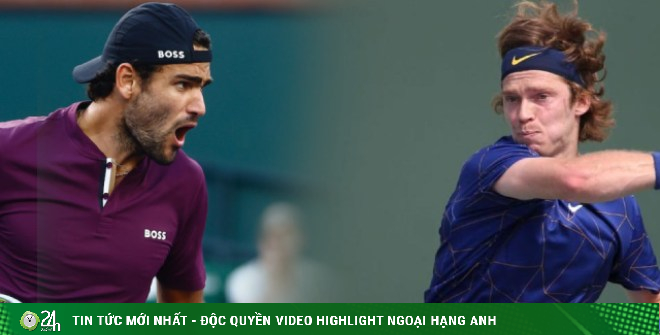 (Sports news, tennis news) 6th seed Matteo Berrettini did not have a hard time winning tickets to the fourth round of Indian Wells.

6th seed Matteo Berrettini easily defeated Lloyd Harris after just over 1 hour 30 minutes with the scores 6-4, 7-5. In the fourth round, the opponent of the Italian tennis player will be Miomir Kecmanovic, compatriot Novak Djokovic.

In another remarkable match, “Little Federer” Dimitrov did not have many difficulties before Alexander Bublik, the player who eliminated Andy Murray in the previous round. Dimitrov took full control of the match and overcame Bublik after 2 sets with the scores 6-3, 6-4. Dimitrov’s next opponent will be home tennis player John Isner.

Video of the battle of Dimitrov – Bublik:

Former world No. 1 Halep enters round 4

Former world No. 1 in women’s singles Simona Halep faced compatriot Cirstea in round 3. With reasonable tactics and diverse fighting style, Halep overcame the opponent after only 2 sets with the scores 6-1, 6-4 . Halep’s next opponent will be Croatian Martic.

Indian Wells 2022 is witnessing too many shocks in men’s singles when Zverev, Medvedev, Tsitsipas, Aliassime, Shapovalov are eliminated respectively. Faced with that situation, Matteo Berrettini is Next Gen’s greatest hope in an effort to prevent Rafael Nadal from advancing to the throne.

However, the Italian player has not been in high form since the beginning of the 2022 season. Except for his achievement in the semi-finals of the Australian Open, he was eliminated early from the last 2 ATP 500 tournaments. In the opening match of Indian Wells (round 2), Berrettini also took 3 sets to subdue Holger Rune.

Entering the 3rd round, the difficulty for the 6th seed doubled when facing Lloyd Harris. From the end of 2021 to the present, the South African tennis player has always maintained stability, the ATP ranking ranges from 31 to 32 (currently ranked 32). On a beautiful day, maybe fans will witness another shock at Indian Wells.

This is one of the most balanced matches, as well as the biggest difference in height in the series on March 16 (Schwartzman is 1m70, Isner is 2m08).

Since the first encounter at the Paris Masters 2017 with the victory belonging to Isner, the two players have not faced each other again. Fans are eagerly waiting to see if Schwartzman’s youth and mischievousness can surpass Isner’s experience and physique to repay the debt of failure in the past.

After Medvedev was eliminated, Russian tennis could only hope for the 7th seed Andrey Rublev (in fact, Russian players are not allowed to use the national flag or the name of the country to participate in the tournament for political reasons). Bearing a heavy responsibility, experts predict that Rublev will experience difficult moments in front of the representative of the host Frances Tiafoe.

Quite surprising when in the only confrontation, the 3-2 victory belonged to Tiafoe (US Open 2021). That is the motivation for the 28th seed to confidently sow the opponent again. (Video tennis Tsitsipas – Brooksby, third round Indian Wells) After Medvedev, Tsitsipas became the next big player to be eliminated from Indian Wells 2022.