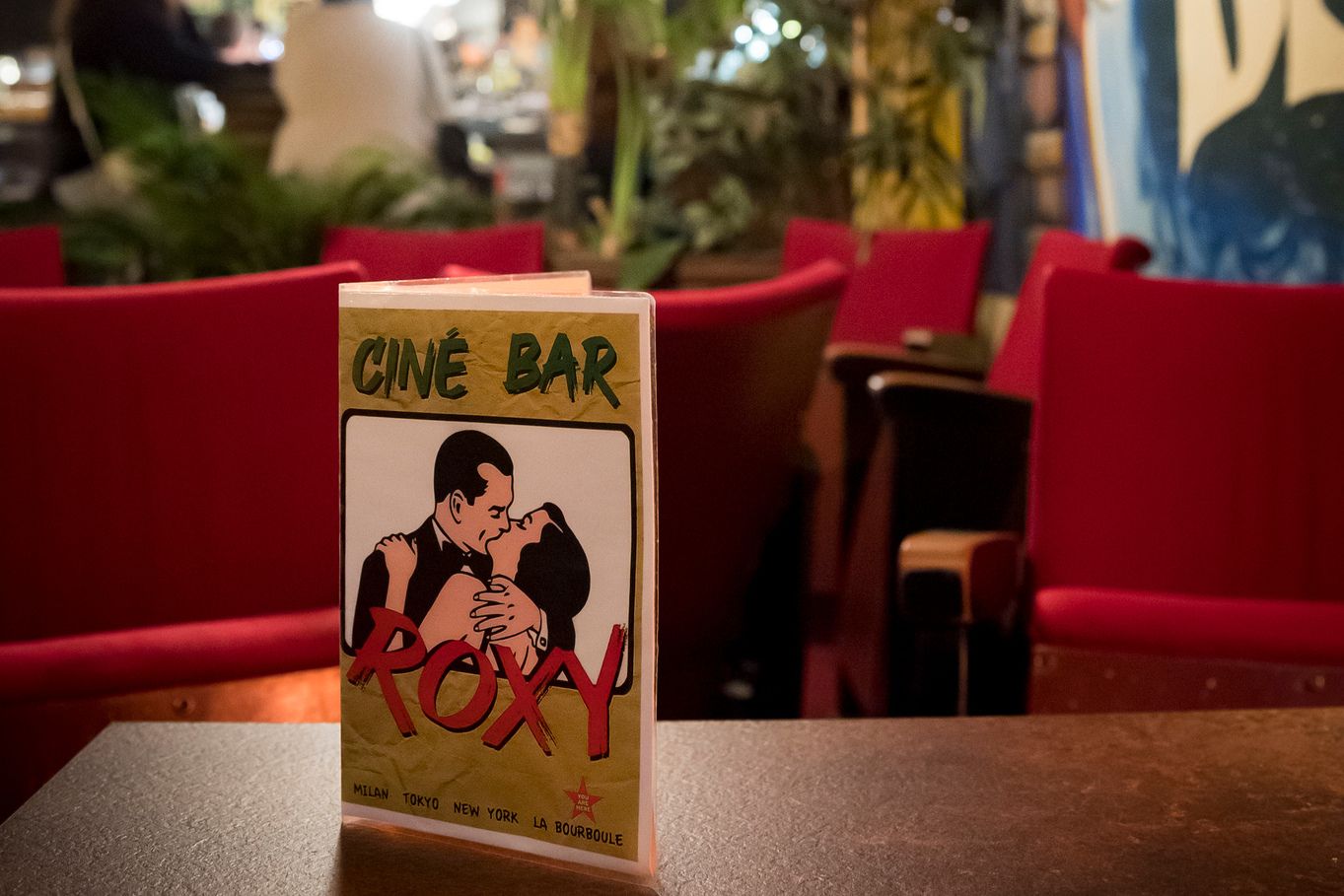 In the evening, the sun escapes on the heights, behind the carcass of the Charlannes cable car, which has been stopped for years. Exhausted hikers and zealous spa visitors go to their beds while the restaurants arrange their terraces on the main avenue. La Bourboule, a spa resort steeped in the quaint charm of the heyday of the Belle Époque, dozes off, lulled by the Dordogne which flows peacefully through its centre.

A few lights still shimmer in the sleeping town, along the Avenue d’Angleterre which climbs towards the Col de la Stèle: the sign of the Roxy. It is a little after 11 p.m., the film is over. The last letters of the credits run on the screen while the small crystalline globes, suspended on the walls of the room, light up again. Under the flowered moldings of the ceiling, the spectators extricate themselves from the aubergine-colored armchairs and stretch.

A joyful hubbub escapes from the stairs leading down to the basement. At the foot of the steps, near the table football, a door opens onto a cozy cellar. Behind the wooden counter, Jean Esnault, “Jeannot” as the people of this corner of Auvergne call him, blows a few kisses and takes the orders with a quiet smile. He went down to open the bar after launching the evening screening and handing out movie tickets from another era: little colored and jagged cardboard stamps, with a deliciously retro look.

“We care a lot about it, says Jean Esnault, who launched the Roxy in 1983 with his girlfriend and brother. At the time, I was a drummer in a local rock band, but that wasn’t enough to feed the little ones.The owner of this cinema was looking for a buyer. Damaged by fire, it had been closed for two years and there was plenty to do. We didn’t have a penny in our pocket but we took the plunge! »

The Rex, created in 1952, with its unique 183-seat hall, then became the Roxy, in tribute to the Roxy Music group. At the start of the 1980s, the spa town still had three cinemas, of which only the Roxy remains today. “We very quickly had the idea of ​​the bar in the basement, and that’s what allowed us to hold on”, explains Jean Esnault. Today, it is still the bar that ensures its viability instead, because, if it benefits from a subsidy from the town hall of La Bourboule, the Roxy is a private company, struggling with the difficulties which affect the sector. the cinema.

Half of the programming devoted to auteur films

Eastwood, Almodovar, Gray, Scorsese… The boss of the Roxy has his favorites and continues, with appetite, to watch for films that will surprise him with “malignant scenarios” and original works. Labeled arthouse cinema, the room devotes nearly half of its programming to auteur films without denigrating blockbusters.

During the holidays, the Roxy pans out with two sessions a day, at 5 p.m. and 9 p.m. – with an additional session at 2 p.m. in case of bad weather. This summer, Buzz Lightning should, for example, delight toddlers, that parents do not hesitate to leave the cinema the time of the session before picking them up at the exit.

“We have a regular clientele, it’s very family-oriented”, rejoices “Jeannot” who is now piloting the Roxy with Augustin Bromboszsz, known as “Gus”, his young partner. The thirty-year-old, in love with the place from a very young age, will take up the torch when Jean thinks of his retirement, “in a few years, maybe”. In the meantime, he plans to refurbish the room – with red armchairs, this time – and continue to ” make dream ” all the generations who push the door of the Roxy.

Under the room, a movie set

Just go down the steps of the Roxy to treat yourself to a journey through time and the oceans. Brick walls, long wooden counter, subdued lights, the visitor, suddenly far from the Auvergne mountains, finds himself projected into a New York bar from the 1950s. A real cinema set, imagined in the early 1980s by Jean Esnault, with the help of the Burattini family of artists, in what was initially only a cellar, with a dirt floor.

The walls of the Roxy Bar are now covered with black and white photos of film actors, from Monica Vitti to Sean Connery, and rock legends, Jeff Buckley or Brian Eno, member of the legendary Roxy Music group. As for the menu, there are, unsurprisingly, cocktails with evocative names: “Dr Zhivago”, “Paris-Texas” and even – a whole program! – “MadMax”.