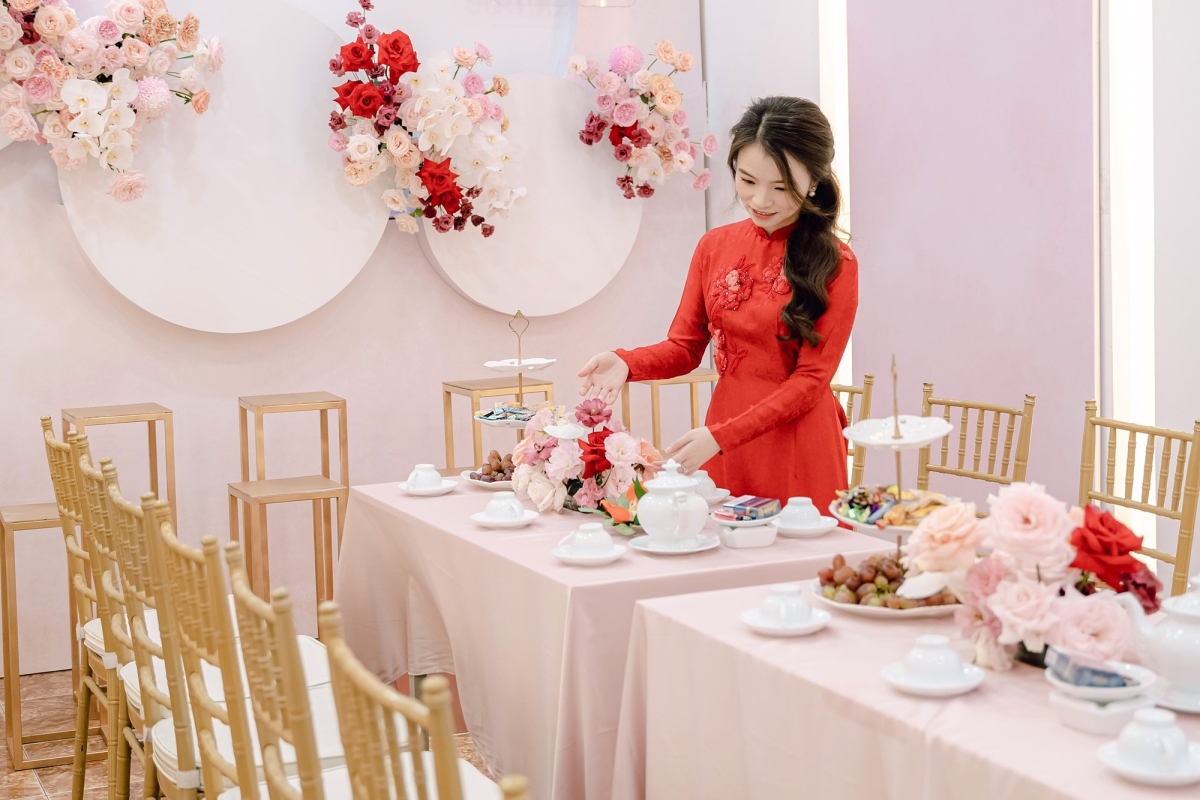 HanoiNear midnight on October 13, Phan Huyen received a phone call from a girl, panicking: “My family wants to celebrate October 15, please save me”.

Working as a wedding event consultant for nearly 10 years and co-founding a company specializing in this service on Hoang Cau Street, Huyen is no stranger to urgent phone calls. But never, in one day, she received more than two dozen calls with the same content.

Huyen had to refuse the strange girl because the schedule was full, the customer had not prepared anything while choosing only a dress that took at least two days. “She had to postpone the schedule to December. Not only our place, but all other facilities were overloaded,” the wedding consultant shared.

From July 18, the dispatch of the Hanoi People’s Committee requested “temporarily not to hold the wedding”. Until July 24, the city applied Directive 16, stopping all non-essential services to prevent the Covid-19 epidemic. Two months later, on September 21, the distance was eased, some services were allowed to operate and the wedding story was also moving again. In October, this activity became more and more bustling, even being likened to a “storm” by industry insiders.

Ms. Duong Bich Hang, owner of a wedding event company on Hao Nam Street, takes care of more than 20 weddings. On October 24, the number of weddings booked for Ms. Hang has increased to nearly 30. “It feels like the whole Hanoi is getting married on October 15 and October 24,” she said happily.

According to Ms. Huyen and Ms. Hang, compared to previous years, the actual number of people getting married is not more. However, the epidemic makes the number of “beautiful days” less and the number of brides and grooms choosing the same day to increase. In addition to the couples that have been scheduled for a long time, some couples who chose another schedule but had to postpone or cancel due to social distance also want to organize it with the mentality that if it’s late, it will lose a beautiful day or the epidemic will flare up again. Not to mention, many people are waiting to hear about the situation, so they will report it closer to the date of the ceremony.

The mass wedding after social distancing puts pressure on all involved, from the bride, groom, families on both sides and service workers.

With the bride – groom, the pressure is mainly mental.

Tran Lan Huong, 29 years old, in Cau Giay district has “closed” the wedding on October 15 from May, but at the end of July decided to temporarily cancel. In early October, seeing that the situation was better, she contacted the wedding event organizer again. “Fortunately, they still prioritize me,” Huong said.

The wedding ceremony went smoothly, but Huong was sad because she couldn’t fix the custom-made ao dai but had to wear the old dress again. She did her own makeup, the photos her brother took because she couldn’t hire people, only temporary. “Looking back later, I will definitely regret it more,” Huong confided.

In some cases like Nguyen Huyen My, “feels like being forced to marry” by the pressure of a beautiful age and a beautiful day from the family. On October 18, my parents asked My to get married in October even though her daughter was not ready. “I cried for two days because I couldn’t lose weight in time,” said the girl living in Dong Da district. Her goal is to lose 10 kg to wear a beautiful wedding dress.

“The bride-groom, especially the bride, has the mind of only getting married once, so she wants everything to be perfect. Parents prioritize things on time, so it is easy to lead to conflicts between parents. with children”, said wedding consultant Huyen.

The service people are trying to find a way to make the guests’ weddings very neat, despite the time being much more urgent than in previous years. For the past two weeks, Ms. Hang and her staff have been working from 3 am to night, sometimes staying up all night to iron fabrics, wash dishes, make flowers, design backdrops, arrange tables and chairs. The hostess also has to ask for sympathy if the company comes to decorate their home a little earlier or later than planned.

Besides, the revenue of companies providing wedding related services is affected because they have to maintain the old prices, even reducing prices to support guests while the items tend to be more expensive. To ensure quality, these companies also have to limit the number of customers they receive.

In the context of the ongoing epidemic, both the bride, groom and family and service workers must learn to adapt.

A striking difference is the grouping of wedding receptions and receptions instead of separating the two days as before. The parties are also smaller in size, so they are more intimate and invested in quality.

At the wedding ceremony on October 19, 28-year-old Le Huong Giang in Ba Dinh district reduced the number of guests by 90% compared to the original plan, so it was easy to upgrade food and drink, decorative flowers, makeup and more. Content. The party is not only “eat and go” but has many performances around the bride – groom such as the dance of the two main characters or the sharing of friends about the couple.

“There are no diplomatic relationships, everyone is comfortable and the wedding is more meaningful. This will probably be the trend of future weddings,” Huyen said.

In order to reduce the pressure when organizing a wedding during the epidemic season, the consultant advises couples to decide as soon as possible to have more time to prepare. Next, it is recommended to set specific costs and standards to quickly classify and select suppliers. In case you don’t have time but still want everything to be perfect, you should hire professional wedding organizers.

Another solution is to stay out of this “storm”, as Nguyen Van Anh chose.

After five years of long-distance love due to studying abroad, the 30-year-old female master thought that she “returned to the country to get married”, unexpectedly she had to postpone the plan indefinitely. The two-family house also belongs to the “hot spots” of the capital, namely Van Mieu and Van Chuong wards.

The year 2021 is about to pass, Van Anh still does not know when she will get married, but more and more, she finds that the time of the organization is not important anymore. For her, the top priority is everyone’s safety and comfort.

“Every day without disease is a beautiful day,” Van Anh said. “Moreover, the love between us is what determines everything.”