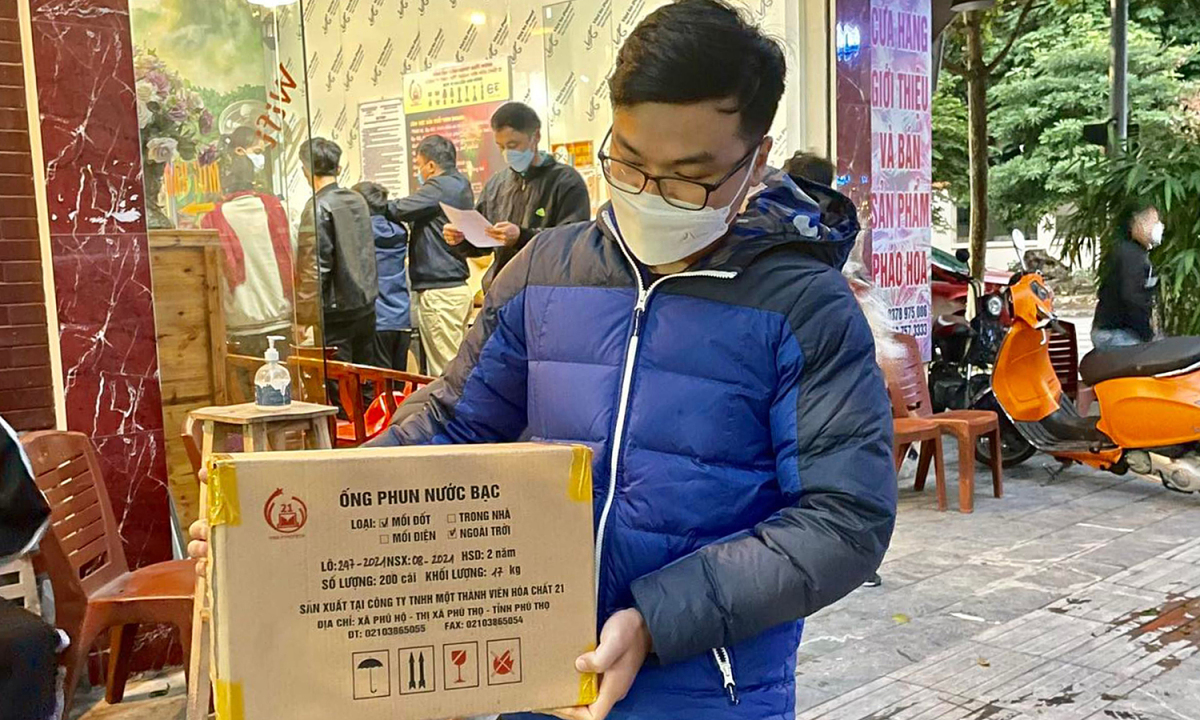 When he heard that the fireworks of the Z121 factory had been sold, Mr. Pham Ngoc Phong, 39, told his two sons, “This New Year’s peach and kumquats can’t be bought, but fireworks are a must.

After “closing the plan” with his son, the young father in Dan Phuong (Hanoi) opened his phone to find a list of Z121 fireworks selling points. There are 10 semi-official stores, but when Phong called, all locations and phone numbers were busy or did not pick up the phone, except for the point of sale in Xuan Mai town. “They said there was only one shipment on January 13, and it was sold out after only one day,” he shared. The store representative arranged for Mr. Phong to call back in 3-4 days, but not sure if the goods arrived sooner or later.

On the afternoon of January 15, when he went to the inner city to handle work, he took advantage of finding a selling point in Dich Vong urban area, Cau Giay district. “Looking for eyestrain and asking people but can’t find the address. Calling the phone number on it can’t be,” he said.

That night, he found some sellers online, but the price was three times higher than the factory price. Guess there is no cheaper place, Phong accepts to spend 1.9 million VND to buy a flower sprayer and a pellet sprayer.

“I’ve never been told to buy firecrackers so loudly,” said Nguyen Hai, 29, a real estate worker from Hiep Hoa, Bac Giang. He just learned about the legal Tet holiday without explosions produced by the Z121 factory, the Ministry of Defense a day earlier. On the morning of January 16, Hai called several points of sale in the province, but most of the phone numbers could not be called or reported out of stock. He called the selling point in Thai Nguyen province and was quoted 1.1 million dong a rig, nearly four times the original price. Goods floating on social networking forums as well equally expensive.

Disappointed because he could not buy the original price, but Hai was still eager for the legal firecracker, so he drove 23 km to Bac Ninh province to buy it. At the first point of sale in Tu Son city, he was informed that the goods had not arrived. At the point of sale in Cho town, Yen Phong district, Hai can buy a combo of 650,000 VND per rig, with one or two accessories, such as a rotating flower bag or a bag of flares. It seems that not many people here know the information, so there is no need to queue. After buying, he received a full sales invoice.

Early on the evening of January 16, eight members of Mr. Hai’s family gathered in front of a large yard to test fire. Each cannon shot up, making a pleasant crunching sound, emitting beams of colorful fireballs. Hai’s wife holds her nearly one-month-old child with wide eyes looking up at the light pillars at a height of 10 to 20 meters.

At the end of the pelletizing rig, Hai added the flower spray rig. Each tube launched into bloom blooms with different colors. This rig has a moderate height so the kids are excited and constantly cheering.

After a few minutes, the explosion stopped and the lights went out, everyone seemed to be excited. “Let’s try it today. In a few days, New Year’s Eve will really play”, Mr. Hai said.

At a fireworks group Z121 on Facebook, after only a week of establishment, there were nearly 3,000 members. On average, there are over 300 articles per day, mainly “hunting” where to sell and exchange experiences. On this group, there are also many people for sale, prices from 17 million to 21 million barrels per barrel (24 rigs). The average retail price is from 850,000 VND to 950,000 VND per rig.

According to Ms. Trang, a seller in Hai Ba Trung district, the Z121 fireworks “are definitely the hottest item of Tet 2022”. She bought more than a dozen boxes, mainly supplying to wholesale customers in the provinces. Today alone, there are nearly 200 customers calling and texting to ask to buy, but there are still no new products for sale.

Firecrackers used to be part of the traditional Tet holiday. Over time, unsafe firecrackers appeared and caused beautiful customs to be distorted. From January 1, 1995, the state banned all acts of producing, trading, setting off firecrackers. However, the illegal sale and use of explosive fireworks has continued in recent years. On the occasion of Tet holiday in 2019-2020, the situation of exploding fireworks suddenly increased, causing 200 people to have accidents, according to statistics of the Ministry of Public Security.

From January 10, 2021, the Government allows the use of fireworks in some special events and in cultural and artistic activities. Currently in Vietnam, factory Z121 is the only unit allowed to manufacture and distribute silent fireworks to the market.

Although this year the pandemic is still going on, thanks to the sound of firecrackers opening spring, the Tet holiday with Hai’s family will be busier than usual. He calculates that in the next few days he will return to these points to buy more to make this year’s New Year’s Eve the most perfect.

For Mr. Phong, this afternoon received two artillery rigs, he carefully read the information and then put it in the locker. For him, these two artillery rigs are like pampering his longing heart with old memories and wanting to bring a happy and warm New Year to his wife and children.

“With this type of legal explosion-free fireworks, the New Year’s Day from now on will be more sparkling and more desirable,” Phong said.