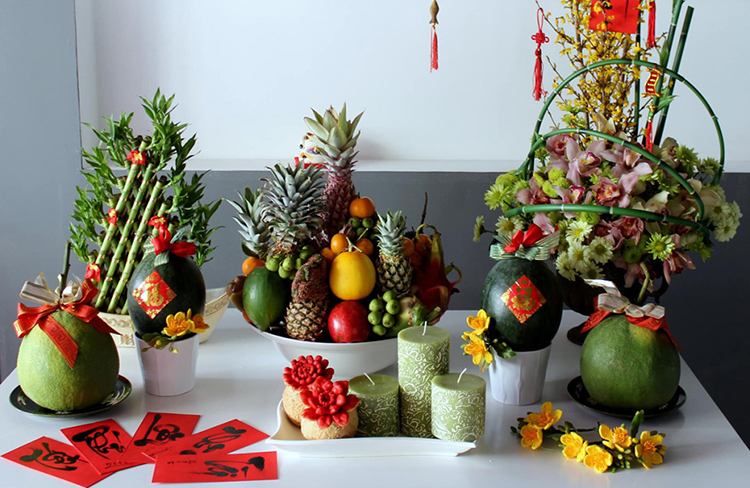 Along with the development of society, the concept of the five-fruit tray on Tet holiday has changed, both in terms of content, purpose, meaning…

In the traditional Vietnamese New Year, the five-fruit tray is an indispensable part to offer to the gods and ancestors, meaning filial piety as well as the wish for good things.

Many people believe that the five-fruit tray symbolizes the yin-yang-five elements, praying for fortune, so they spend a lot of money to have a five-fruit tray that is not incompatible, in accordance with feng shui with the hope that the new year will do well.

The origin and meaning of the five fruits are recorded and explained in the Vu Lan Sutra. Those are the five types of fruit that bhikkhus must cook or peel before eating. The first is a fruit with seeds such as apples, almonds, peaches, plums. The second is a fruit with skin like melon, pear, strawberry. The third is shelled fruit such as coconut, pecans, pomegranate. The fourth is the rough-skinned fruit like pine and cypress. The fifth is an angular fruit like larva, large and small beans…

“The five types of fruit above were originally used to make offerings (offerings) in the Vu Lan Ben Dharma festival, then used for worshiping in Buddha ceremonies, and in general, in ritual sacrifices in general,” Mr. Hai said.

The researcher shared that many documents recorded in the 5th, 6th or 7th centuries BC show that when the Buddha was alive in India, there was a custom of offering five fruits. In China, legend has it that in the 6th century AD, Emperor Wu of the Liang Dynasty was the first to organize the Vu Lan festival, then the Tang and Song dynasties were popular and spread to the people and used in rituals. offerings in general. On the occasion of Tet, countries with popular Buddhism often display five-fruit trays to offer to the Buddha and ancestors.

“Therefore, the deepest meaning of the five-fruit tray is to talk about filial piety. The five-fruit tray is the most solemn item on the ancestors’ altar during Tet. It shows that Vietnamese people attach special importance to filial piety. “, said Mr. Hai. According to this expert, in the past, people used to display fruits picked from home gardens, the most delicious fruits they could grow, to offer to their ancestors with all respect.

Thus, the five-fruit tray on Tet has its origins in religion and belief. But maybe because few people know it, it is rarely mentioned, so it has been “populated” so much that many people think it is a folk custom. And also according to that, the understanding of the five-fruit tray today is different from place to place, depending on natural conditions and cultural conceptions that have appropriate changes; making the “five-fruit tray culture” more and more rich and diverse in terms of explaining the origin, meaning, and even borrowing and ascribing to yin-yang-five elements. Saying five fruits is related to the five elements: to display five different colored fruits, representing the five elements (Metal, Wood, Water, Fire, Earth), which are the 5 constituent elements of the universe.

From North to South, each person, each family often chooses fruit according to their preferences and concepts. The fruits displayed on the five-fruit tray are diverse, imbued with indigenous cultural characteristics and expressing the family’s wish for peace and happiness. Each type of fruit selected to be offered to the altar is usually associated with a symbolic meaning, associated with the concept of “five fruits representing the five elements” and an inference about the meaning of the colors of the five elements. For example, blue symbolizes balance, peace. Red (or orange) symbolizes good luck. Yellow color symbolizes prosperity…

Regional characteristics are clearly shown on the five-fruit tray of families. Northerners arrange a five-fruit tray with green bananas, grapefruit (or Buddha’s hand), peaches, persimmons and citrus. Southerners display five indispensable fruits, mango, orange, pineapple (pineapple), papaya, fig, custard apple, watermelon… And as is typical of folklore, the names of the fruits are compared. for easy remembering and associated with wishes and conceptions of family life and residential areas, the most popular ones are: Cau (cucumber), coconut (moderate) enough (papaya), fig (affluent, rich) have), spend (mango),… It’s easy to see that people’s simple wishes “hope (for the new year) to have enough wealth, enough to eat and enough to spend”.

People in the Central region display a tray of five fruits more simply, perhaps because of the weather, climate and soil conditions in this region, it is difficult to grow diverse fruits like the North and South. The five-fruit tray mainly has watermelon, orange, persimmon, papaya, grapefruit, tangerine…

In general, although there are many changes in form, the throughout meaning of the custom of displaying the five-fruit tray on the altar on New Year’s Day is still preserved, showing sincerity and respect towards the origin, ancestors and ancestors. Wishing you a happy and healthy new year.

“Therefore, you should not think that you have to buy expensive, imported fruits. You have to have all 5 types and 5 colors to have lots of luck. The sincerity and filial piety of children and grandchildren towards ancestors and parents is the tray. the most beautiful five fruits,” said Mr. Hai.

For Vietnamese people, the altar is the most solemn, pure and sacred space in the family. The altar is like an invisible bridge connecting the two realms of yin and yang, the interference between the earth and the sky, between the gods and the people, between the descendants and the ancestors.

According to Mr. Hai, the altar must be the center in decorating the family on Tet holiday, a place to display the most precious and beautiful products of the owner. Taking the incense bowl (incense) and the five-fruit tray as the focal point, around the altar can be decorated with candle lights, fruits, statues, diaphragms, couplets… so that it is dignified, warm, and brilliant. .

“Depending on the circumstances of each family, each family has its own layout. Any type of fruit or item, whether fresh fruit or made of other materials, can be offered to the altar. The most important thing is that the owner offers and decorates it with all sincerity, filial piety, and admiration for the gods and buddhas, for his ancestors,” said Mr. Hai.

Clean up the altar on Tet holiday

It is possible to clean (clean) the altar (faith, god) on any possible day, no need to choose a date and time. Most importantly, the supervisor must work with all feelings of respect and admiration; We must consider taking care of the altar like cherishing and taking care of ourselves, always thinking about making the altar pure and sacred.

Stemming from the above requirements, the person who arranges and decorates the altar needs to fully prepare all the best and cleanest dedicated tools for use. Before covering the altar, it is necessary to wash and clean, make yourself pure; In the process of working, always concentrate, concentrate, do not laugh or talk, shout indiscriminately, even swear.

After the altar is finished wrapping and decorating, it must meet the following requirements: clean, tidy, dignified, brilliant; so that when burning incense, performing rituals in front of the altar, everyone feels the sacredness and respect. The altar most clearly shows the mind, concept and culture of the owner.

Because of that, most families choose a good date and time, buy perfume and the cleanest items to cover the altar, especially during the holidays.