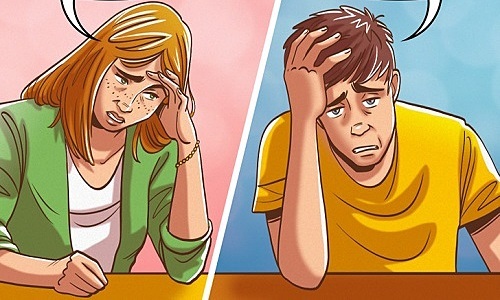 To deal with stress, women need to be told, need someone to cuddle, while men want to exercise or find alcohol as a way to escape.

The three hormones that play a big role in the human response to stress are cortisol, epinephrine, and oxytocin. In stressed women, cortisol and epinephrine enter the bloodstream and oxytocin is released from the brain, boosting emotions.

In men, oxytocin is released in much smaller amounts, thus less emotional.

Research in the American Journal of Psychology, July 2000, shows that women are more likely to protect themselves and their loved ones when under stress. Safer for them means less stress. For women, creating and maintaining a network of friends is also healing.

Men, who release smaller amounts of oxytocin, tend to experience a “fight or flight” response when stressed, meaning they either drink and hide or fight back. The way to reduce stress for men is to keep balance.

Sacrificing yourself in relationships stresses women out. For men, tension comes from the desire to win by all means.

A 2010 study in the US found that women read more books to deal with stress than men (57% versus 34%). Also, women enjoy connecting with people and activities like spending time with friends or family.

Meanwhile, men play sports and listen to music to help themselves feel better. Eating is also a way to manage stress, women say. They even overeat or eat unhealthy foods much more often than men (49% versus 30%).

When asked what changes they need to make to improve their willpower, women often say they expect less fatigue, more energy, and more time. Men often say they don’t need much encouragement from friends or family, but need more money.