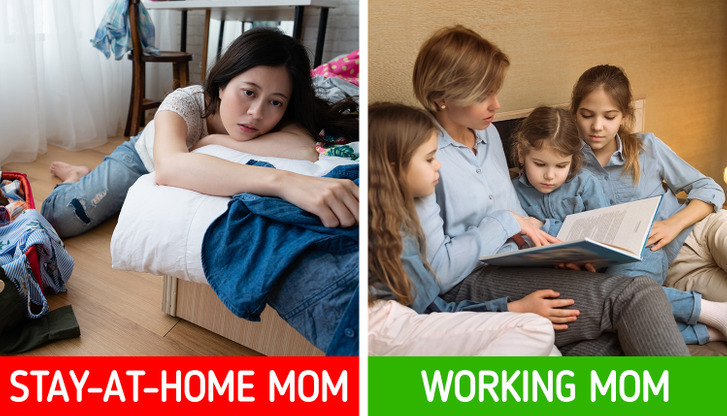 Research shows that whether at home or at work, women can be good mothers. Career does not affect the mother-child relationship as many people think.

Working women are happier than housewives

A study published in the Journal of Family Psychology, by Dr. Cheryl Buehler and Dr. Marion O’Brien, University of North Carolina (USA) based on a study of more than 1,300 mothers found that mothers worked part-time. or full-time while the children were young were happier than stay-at-home women. In addition, working women have better overall health and fewer depressive symptoms than housewives.

Another study found that women who worked full-time after having their first child had better mental and physical health, by age 40, than those who did nothing.

Children of working women may be happier

In a British study, in 2011, children were happy when their mothers were satisfied with their relationship with their partner. However, the child’s happiness is less dependent on the father’s happiness.

The subjects of this study were 6,400 women, 5,400 men and 1,200 children aged 10-15 years. Overall, 60% of children said they were “completely satisfied” with their family. However, this number dropped to 55% among children whose mothers were unhappy with their husband’s life and increased to 73% among children with a happy mother.

According to the American Women’s Health Information Center, stress can affect a woman’s mental and physical health in a variety of ways, including headaches, stomach upset, and back pain. Prolonged symptoms can harm the mother-child relationship.

A study on the satisfaction of working women and housewives, in 2015, found that working women manage stress more effectively than those at home. Simply because they face many complexities due to work pressure, the working environment should be stronger, patient and better manage their emotions.

Despite doing the same job, women still have higher job satisfaction and completion than men, according to a 1997 study. It shows that financial independence gives women more autonomy and allow them to provide and pamper their children more. A lot of stress will be relieved when women can support the family financially.

Children of working women are better educated and more successful

According to a Harvard study that looked at data from two social surveys of more than 100,000 men and women from 29 countries, having a working mother has major benefits for her children as adults. .

Children of working mothers are generally more educated, are more likely to be employed, advance in their careers, and have higher annual incomes. They will also spend more time taking care of the family than the children of a housewife.
The researchers suggest that working mothers have the necessary skills to manage work and ensure family responsibilities, while promoting gender equality.