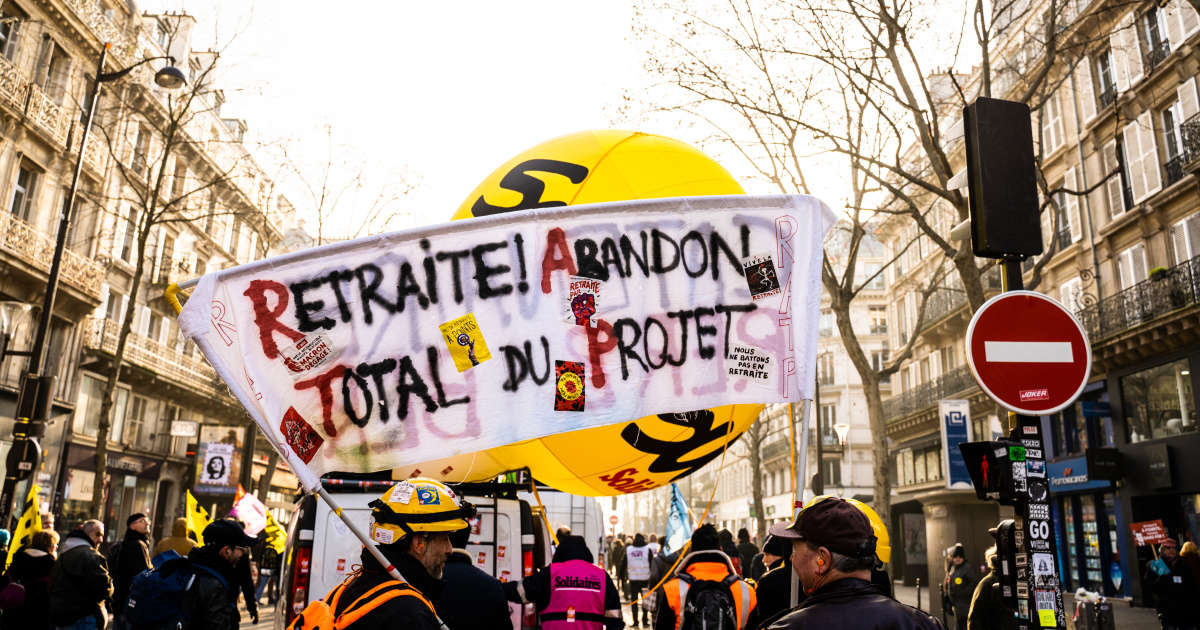 At a time when France is deconfining and the French are starting to think about their summer vacation, Emmanuel Macron took the risk, this week, to put back on the table the explosive site of a pension reform, leaving for the open hours questions of content and schedule. Traveling in the Lot on Thursday, the President of the Republic has indeed blown hot and cold, affirming on the one hand that the reform “Very ambitious” – even if “Carrier of concern” – which was on the rails before being cut short by the Covid crisis, will not be able to be “Recovery as is”, but on the other hand that “Nothing is excluded” and that he will have to make decisions “Difficult” so that the last year of the quinquennium is ” useful “.

The president should “Be able to explain at the beginning of July when he presents his roadmap for the coming months” certainly with a social summit, a government source told AFP. The subject is eminently flammable, because of the pandemic, the economic and social crisis, and the risk of putting the French back in the street, less than a year from the presidential election.

Still, if the Minister of the Economy Bruno Le Maire urges reform to make the pay-as-you-go system viable, the majority is divided on the content and timing of what the Head of State has again presented as “The mother of all reforms”.

The Minister of the Economy is indeed perfectly clear: the pension reform must be the ” priority ” of the government. Bruno Le Maire pleads this Sunday in the “Journal du Dimanche” for a “Greater overall volume of work” without expressing themselves clearly on a possible postponement of the legal age of departure.

“It will be necessary (…) to continue structural reforms: the priority is pensions. “

“It is good that this reform does not take too long”, he added Sunday during an interview with Europe 1 / CNews / “Les Echos”, hammering that the “Responsible” of this file remains the President of the Republic, alone in a position to ” to define “ the timetable for this reform.

“The President of the Republic has been clear” as for the fact that the reform could not be taken again as it is, however admitted Bruno Le Maire. But that doesn’t“Does not exclude taking into account the individual situation of each”, he qualified, this principle having been presented by the government as the basic philosophy of the reform. Asked about the hypothesis of a points-based retirement system, the Minister of the Economy refrained from giving a clear answer, contenting himself with insisting on the need for” to balance “ the current system. He also did not specify what timetable he wanted for the reform.

“There are several options, it is not for me to define them. But the objective must be indeed that at the end of the day, we have a greater overall volume of work to guarantee the standard of living of our children, and that all this rests on a principle of justice ” and of “Flexibility”.

The pension reform is “Inevitable”, also ruled Saturday the president of the MoDem François Bayrou, who believes for his part that it will be “At the heart of the presidential campaign”. During the campaign, “Everyone will come and say whether or not he is determined to take on this reform for one reason only, and that is that pensions continue to be paid”, declared on BFMTV François Bayrou, even if he is not “Not sure that the timing of an election campaign is the right one” to evoke this explosive subject.

“If we go in the direction of dangling arms and lose interest in the subject, one day – perhaps soon – it is pensions that will be in question. “10 points on which the government has changed its pension reform

“We need a clear, simple reform”, not “Something we don’t understand”, underlined for his part a leading minister to AFP. “We must all know that we will have to work more”, added a heavyweight of the majority, for whom however “We can’t do that now”, so close to the 2022 poll.

“Political courage is taking responsibility: when there is a problem, we deal with it”, judged for his part the boss of LREM deputies Christophe Castaner.

A minister warns, however:

“We can no longer start with a text in 312 articles and which requires weeks of debate in the National Assembly. “

Evoking “Several scenarios”, the Minister of Labor Elizabeth Borne limited herself, on LCI, to recalling the challenges of the reform: “Equity, justice”, but also “Sustainability of our social protection model affected by the crisis”.

We must overhaul the French social model

The French for a “relaunch” of the reform

Coming out of confinement, Emmanuel Macron wants “Watch how the country is progressing and what we are collectively ready to do”. Ifop asked the French the question on June 1 and 2: they are slightly in the majority (53% against 47%) to think that it is necessary ” revive “ this reform.

On the merits, it is necessary “Especially something which contributes to the restoration of social accounts”, defends the leading minister, questioned by AFP, supporter of“A measure of age”, is “Retirement at 64 or 65”.

The project presented in 2019 – a unified points system replacing the multitude of existing schemes, with a “Pivotal age” to encourage people to work longer – had been decried by his opponents for its complexity and had provoked a war of attrition between unions and government.

“I stay on my guard all the time!” “, stressed the general secretary of Force Ouvrière Yves Veyrier on Friday, repeating on France Info that a points system “Does not solve the difficulties in any way”.

What if the rich financed pension reform?

One scenario could be favored by the executive: that of coupling the pension reform to the almost complete law “Old age and autonomy”, aimed at reforming aid to the elderly, which would have the merit of making it possible to find the right solutions. billion needed to finance this law.

With the pandemic, “Something profound, socially, has happened which has raised questions about our bond between the generations”, noted LREM deputy Céline Calvez, who was part of the special pensions commission, Friday on Radio J.

In the right-wing opposition, for whom reform is essential, LR Eric Woerth, chairman of the Finance Committee of the National Assembly, called for “Start from scratch: assume the increase in age, small pensions and indexation of pensions, clarified hardship, special schemes, simplification of funds”. And the former Budget Minister of Nicolas Sarkozy to plead for a retirement “Quite quickly at 64, and later at 65” and for “Clearly end, not over thirty years, the special schemes for new entrants, redefine hardship and make an effort on small pensions, by indexing the first 1,000 euros of pension on the evolution of the standard of living”.

On the left, the national secretary of the PCF Fabien Roussel has exhausted Emmanuel Macron who, with this reform and that of unemployment insurance, will “Until the end undermine the world of work, (its) working conditions, (its) purchasing power”.