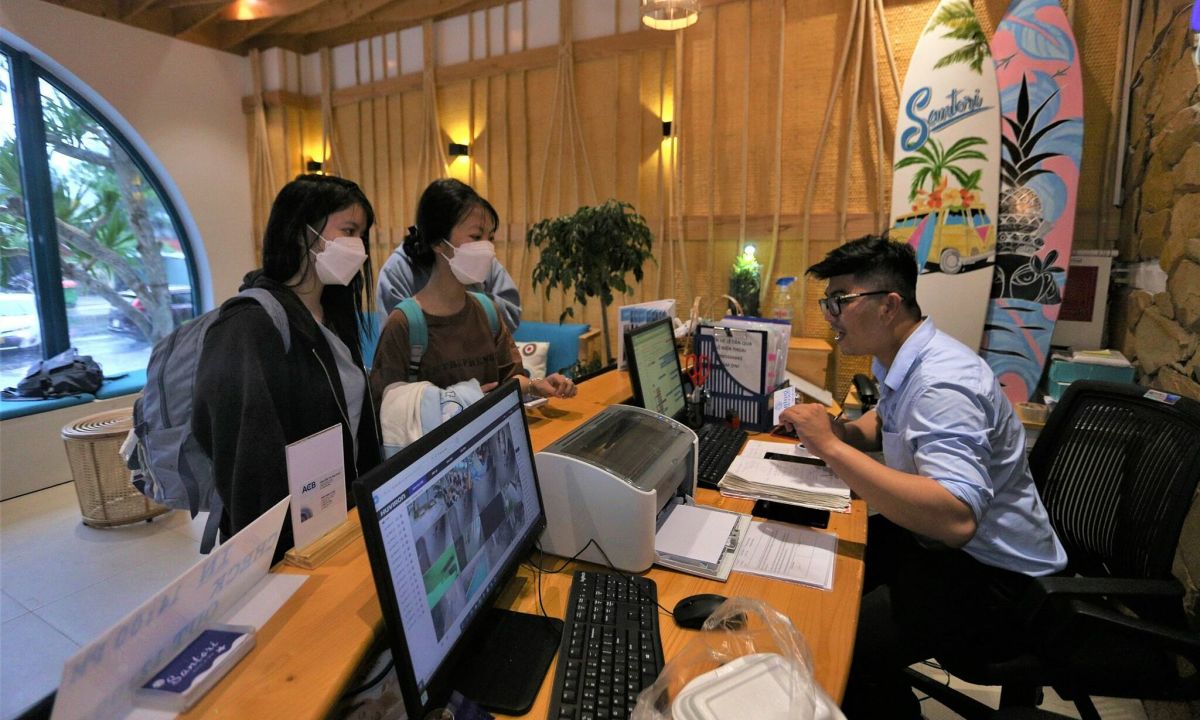 Hundreds of people with unstable houses, students staying in Da Nang and Quang Ngai can come to avoid storms in hotels that are open for free.

Inside the sliding door is rolling up just enough for people to enter, Mr. Le Chien, the hotel owner, instructs people to hang raincoats and helmets outside. The hotel also prepared 10 doormats because the number of people coming to the hotel is very large.

People and guests enter the hotel in Binh Hai commune to take shelter from the storm. Photo: Pham Linh

Ms. Tran Thi Song, 58 years old, about 100 meters from the hotel with her family of 6, arrived at the hotel at 12:30. Her family lives in a level 4 house with tiled roofs, listening to a level 15 storm coming in, the whole family goes to the sea to shovel sand into bags to protect it, but they are still worried because the house has been roofed during the storm Molaves 2020. Yesterday, She saw on social networks that the hotel owner announced that she would support free accommodation, so she signed up early. “The owner of the hotel has just come here not long ago, but he lives very gratefully,” said Ms. Song.

Mr. Le Chien said that natural disasters are a common difficulty, so he invited people to bring personal items such as blankets, pillows and mats to the hotel to stay. He also considered buying a generator, but he couldn’t make it in time, so he told everyone to bring backup chargers and flashlights.

And Mrs. Nguyen Thi Canh (Mr. Chien’s wife) said that she had prepared about 10 million VND of necessities before the storm hit, serving her family and neighbors. “Relatives can cook in my kitchen on the ground floor,” she said. Previously, when the family in Binh Thuan commune (2 km away) also used to shelter people from storms in permanent houses.

Having just laid out a mattress for his child in the hotel, Mr. Le Trung Hau, 30, shared that his two young children were very confused when they saw that the whole family had to be evacuated. “But when there was a new place to sleep in the hotel, my two children laughed, and there were a lot of relatives here,” Hau said.

On September 27, many people along the coast of Binh Hai commune and other coastal areas in Quang Ngai were also supported by the locality to relocate to permanent places. In addition to state-owned facilities, people are also advised to move to more permanent houses in the locality. By this afternoon, Quang Ngai province relocated and evacuated 10,000 people. In which, the coastal districts are about 5,000 people.

Mr. Nguyen Son Tung, the hotel’s owner, added that the remaining 18 empty rooms are reserved for welcoming people with unstable houses and students staying at the hostel for free. By the afternoon of September 27, all rooms were full.

Talking about this decision to support, Mr. Tung said that natural disasters, storms and floods are something no one wants. The guests who had booked rooms in advance were stuck because the flights were canceled to prevent storms, so the hotel gave free room and meal to share with tourists as well as students and the poor.

“The storm is complicated, I can’t let the guests who have expired rooms have to check-out to find another hotel on the day of the storm, it will be very dangerous”, the hotel owner said, “We also do not collect any money. with guests and residents”.

Being supported with rooms and meals during the trip from Tay Ninh to Da Nang, Ms. Nguyen Minh Thuy said that she felt very warm and impressed with the kind and civilized behavior of the hotel owner. Huynh Thuan (from Ho Chi Minh City) said that the hotel informed this support right after check-in.

“The hotel staff also told me to absolutely not move out to ensure safety. I had an unfortunate storm when I was on a business trip, but I was lucky to receive not only support but sincere affection.” I said.