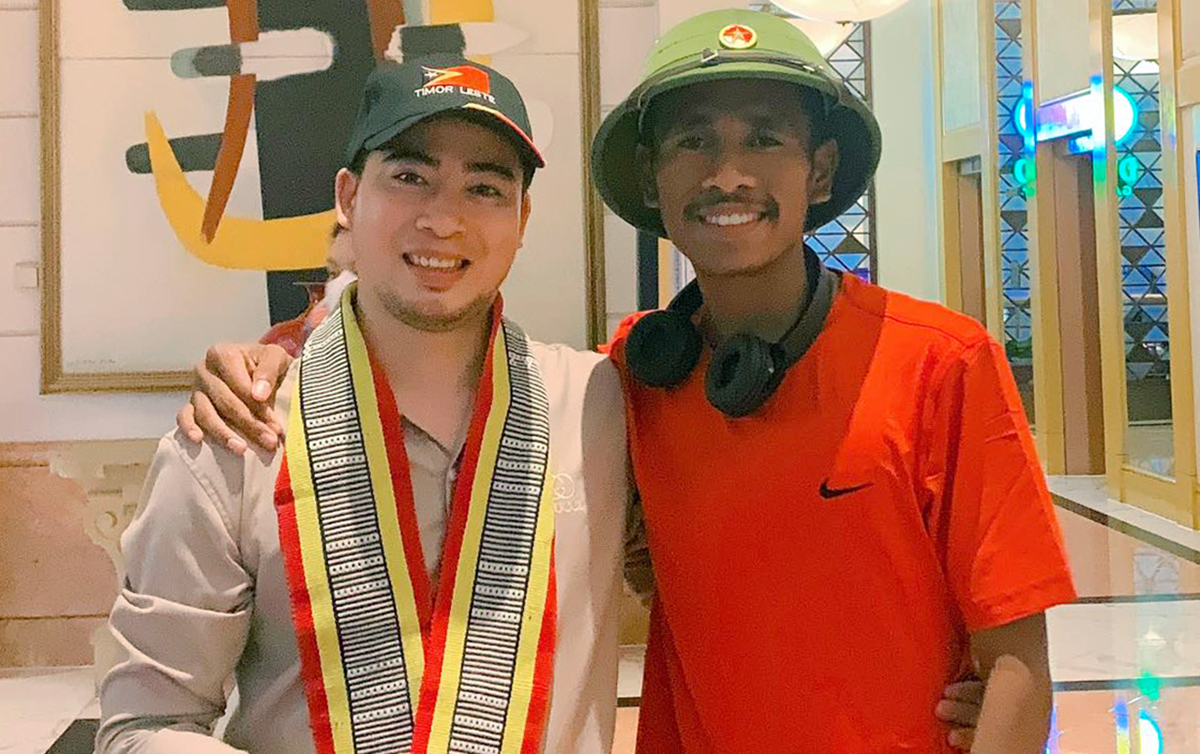 HanoiReceiving a gift bag full of specialties from the three regions sent by Vietnamese people, Felisberto was surprised, unable to say anything, just kept bowing and thanking him.

“I am very touched by the special care that Vietnamese fans have for the Timor Leste track and field team. They gave us an unforgettable feeling during the two weeks of competition,” said Felisberto de Deus, 23, the bearer. about two silver medals for the country’s sports delegation in the 5,000 m and 10,000 m races at the 31st SEA Games, shared.

This is considered a historic SEA Games for Felisberto as well as Timor Leste because this country has never won a medal in athletics.

Felisberto said, on the afternoon of May 17, right after receiving the award, he called his family from the middle of My Dinh stadium. In a short conversation, the 23-year-old boy talked about the moment when the Vietnamese audience cheered enthusiastically on each lap, even though he was facing the host athlete.

“Vietnamese people are very friendly, kind and promote sportsmanship. This makes my heart warm,” he said. On the other end of the line, Felisberto’s parents were proud of their son, they shared their happiness and burst into tears.

Witnessing the scene of Felisberto wearing the national flag of Timor Leste, holding a small Vietnamese flag running along the My Dinh yard, actively holding hands with two Vietnamese athletes to celebrate the victory and hear stories about difficult circumstances and efforts The best performance of the country’s athletics team, Mr. Nguyen Van Ich, 30 years old, in Hoang Mai district met him.

Before coming to see Felisberto, Mr. Ich spent half a day going around supermarkets around Hanoi, buying a gift bag of mung bean cake, rice cake, cu de, o mai, pia cake… a specialty of the three regions. of Vietnam with a mortar hat. At 5 pm on May 21, he met Felisberto at the Daewoo hotel, Ba Dinh district, where the group stayed. The moment he received the gift, the young Timor Leste repeatedly bowed his head and said thank you. In the evening of the same day, he also invited the whole team of athletes from his country to enjoy Hanoi’s traditional bun cha.

“There has never been a country that we have come to play in where people have treated us as well as Vietnam,” Felisberto choked.

“The Timor Leste athletics team has worked very hard. They deserve more than that. I hope the gifts will go to the relatives and friends of the athletes back home”, Mr. Ich confided. .

Before parting, Felisberto ran up to his room to get a cap and hand-embroidered handkerchief – a symbol of solidarity, friendship and attachment between Vietnam and Timor Leste – for Mr. Ich. “Not only receive, I want to give new friends a gift from home,” Felisberto laughs.

Felisberto said he received many gifts from the Vietnamese people. On the morning of May 22, Ms. Le Hong Diem (Hanoi) also came to the hotel to give a gift bag including Thai Nguyen tea, Ban Me Thuot coffee, dried jackfruit, cashew nuts… for him to bring home to celebrate. with family and friends.

Four days after storming with the moment of victory celebration on the field, many people recognize “athletic hero Timor Leste” on the road. They actively ask for photos, give souvenirs and best wishes. The number of followers of Felisberto’s personal page also increased significantly.

Young man Timor Leste expressed gratitude to athlete Nguyen Van Lai, who let him take a photo first on the podium, and female volunteer Ha Thi Thanh Thuy, 19 years old, student of the Spanish language department, Dai from Hanoi, who helped find the Timor Leste flag to celebrate his victory, when he finished second at the 10,000 m race.

Playing away from home but Felisberto said it feels like home. “I’m not famous, but when I win a lot of people come to congratulate me. Vietnam is very hospitable and friendly, many people shout my country’s name in the stands. They surprise and move me,” the young man said. 23 years old said and said this is the second time to Vietnam. Previously, he had been to Ho Chi Minh City to attend the youth athletics tournament, but this visit made a strong impression.

Felisberto de Deus grew up in a farming family with eight siblings in Gleno – the small city of Timor Leste. From a young age, he and his friends competed on the dirt road near his house and began to love running.

In 2015, he turned professional and received support from his family. Although his parents are farmers, the economy is limited. A year later, Felisberto went abroad to compete in Thailand for the first time. “We don’t have a lot of conditions to practice and compete at domestic and international competitions. But compared to other sports, athletics is still lucky because we have a place to practice,” Felisberto said.

On the eve of the 31st SEA Games, Felisberto and his teammates practiced from early morning or late afternoon to avoid harsh weather in their homeland. The place of practice changes flexibly, from a beach full of garbage and gravel, to a dilapidated stadium or on a residential road with many potholes. “But all the difficulties and hardships were rewarded with two prestigious medals,” said Felisberto’s coach.

In addition to being an athlete, Felisberto is a freshman studying English at the National University of Timor Leste. “In the future, if I can’t compete, I hope to become an athletics coach or an English teacher,” he laughs.

After the closing ceremony of the 31st SEA Games, on May 24, the team of athletes from Timor Leste will return home. “Above all, I want to thank the Vietnamese people for cheering me on, always encouraging me to do my best. For me, Vietnam is already my second home. I will definitely come back.” I said.

The Timor Leste sports delegation has 39 athletes participating in the 31st SEA Games. They competed in 7 out of 40 sports, including athletics, football, karate, taekwondo, weightlifting, swimming and boxing. At the end of the last day of competition, their sports team won three medals, including two silver and one bronze. Timor Leste’s most successful congress was 2013 in Myanmar, when he won two gold, three silver and five bronze. In SEA Games 30, they won only one silver and five bronze.