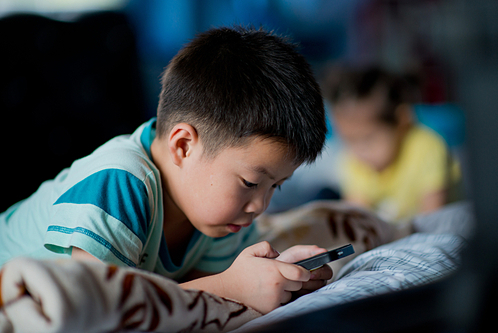 ChinaIn the middle of the summer afternoon, the shrill screams of 7-year-old Guoguo echoed throughout a six-story apartment building near Taiyuan, the capital of Shanxi province.

But the neighbors were used to this riot. They knew very well that Guoguo’s tantrum was because his parents had just taken the phone out of his hand.

Guoguo was born into a working-class family. Fang, the 35-year-old boy’s mother, is a housewife, and his father’s name is Liang, a truck driver. He has a twin sister named Tangtang and a 12-year-old sister named Panpan.

The mother said that the twins were addicted to phones from the time they could not read. Guoguo doesn’t know how to type on a keyboard but knows how to use a phone by voice input.

In China, the search “What to do if your child is addicted to mobile phones” yields millions of results. A 2019 survey showed that more than 93% of parents in this country let their children use cell phones every day. More than 30% of those surveyed said they have failed to instruct their children to use devices properly.

Currently, the nation of billions of people is encouraging couples to have more children. But thinking about struggling to cope with phone addiction, many young parents are hesitant.

For many years now, Ms. Fang has had to go through a long, hard and lonely battle over her smartphone.

Whenever she couldn’t hear the twins’ noises, Fang knew for sure the baby had stolen the phone. Constantly having to fight her mind to get this device back from the hands of the kids, she switched to hiding it and periodically changed the password. Hide it so well, sometimes Fang can’t find it. Moreover, changing the password, Ms. Fang’s children always find out easily

The day before Guoguo became fussy, Fang took the boy to his grandmother’s house to attend the wedding. Before leaving, she promised to buy her son a new toy gun and told his biological father not to let him play with the phone.

Grandpa promised to take the boy to the park, then watch TV before bed. When he woke up at 5 a.m. the next morning, he found his grandson lying in a corner on the sofa, his hand on the phone, his face expressionless. Somehow, Guoguo snuck past him, unplugged the phone from the charger, and found the password.

Fang was furious when he heard about it. Her husband made her son stay in his room to reflect on what he had done. “Do not let your children touch their phones until they have finished their summer homework,” he announced. This action triggered Guoguo’s anger.

The boy is so obsessed with his phone that, when asked his three favorite things, he replied, “First is playing on the phone, second is watching other people play”. Then, Guoguo racked his brains for the third thing, but couldn’t come up with an answer. At the teacher’s suggestion, he reluctantly said he liked reading.

At first, Fang thought this was normal. But then, she saw Tangtang pretending to use the cap of a water bottle as a powder and often lifted her heels like she was wearing high heels. Finally, the mother found out the cause. My daughter is addicted to short online makeup and manicure videos.

Afraid that her child would be obsessed with her appearance and neglect her studies, she talked to him. Tangtang claims to want to become a beauty blogger. On the occasion of his birthday, given a gift by his aunt, Tangtang did not rush to open it. He borrowed his father’s phone to record a video of opening the box. This year, when her daughter enters elementary school, Ms. Fang worries that she will date too soon. According to her teacher, once in class, two boys competed to see who would hold Tangtang’s hand, while younger brother Guoguo cheered them on.

Not only the twins, Fang’s eldest daughter Fanpan has had an eye exam since she was five years old. Doctors discovered she had severe strabismus. Fang and his wife were stunned.

The mother believes that her children started to become addicted to phones when she left them at home to be cared for by her husband’s parents, to go to work. Worried that the children might be in danger playing outside, the grandparents gave them a phone. It’s also the only way to keep the kids quiet. Educational books and toys that Ms. Fang bought for her children were covered with dust because grandparents did not know how to play with them.

When Fang realized her children were addicted to phones, she expressed her attitude to her parents, but realized it was complicating the relationship. Both her husband’s parents and Fang rarely attend school. Their thinking about childcare is simple: “As long as the kids don’t cry, cause trouble or get hurt, it’s fine.”

Deciding to raise her children properly, the mother quit her job as an accountant to stay at home. Fang does not allow the children to play with their phones or watch TV before completing their homework.

Sun Hongyan, a researcher with the China Center for Adolescent and Children’s Research, said that parents should set an example first and not let their children become addicted to their phones. “It’s a good idea to develop phone rules and teach children how to identify content,” said Mr. Sun.

But being an example is not easy, Fang’s husband keeps coming home from work and lying on the sofa watching short videos. An argument between husband and wife causes tension in the family.

The aunt suggested Fang enroll Gougou for an MC course. Unexpectedly, the boy focused on something that usually took no more than two minutes to become absorbed in this subject. The boy also hosts a children’s program at the school. Back home, Guoguo rehearsed very long sentences again. The mother was startled, wondering if she had not had the patience and love to teach her child before.

“In the end, my child’s main need is love. Parents don’t care, the phone is a cheap source of happiness they can cling to”, she concluded.