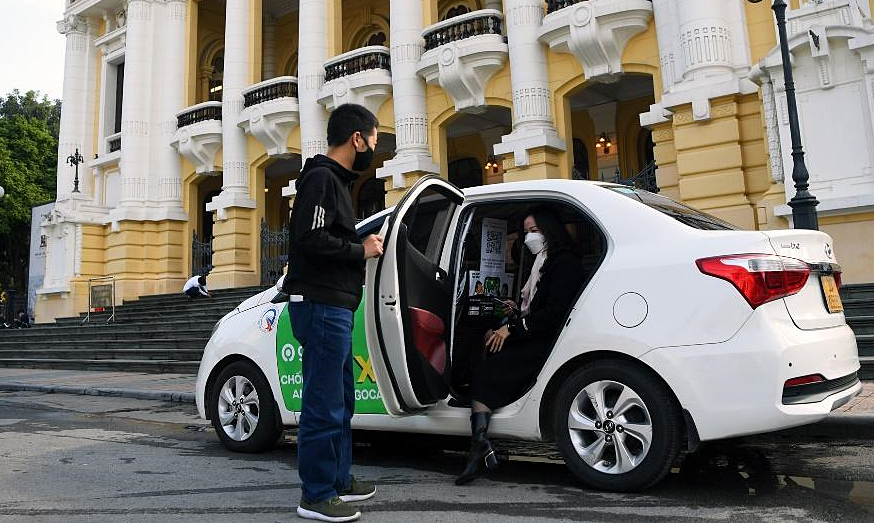 Hanoi is the second city in Vietnam that Gojek deploys the GoCar Protect service with enhanced standards on disease prevention.

Launched in early 2022 in Hanoi, while the number of Covid-19 cases in Hanoi was still high, Gojek’s GoCar technology car calling service recorded an exponentially increasing number of customers every day. . The highlight of GoCar is in the “Antibacterial X3” standards set by Gojek for the GoCar Protect product line, helping them feel more secure against disease risks.

On the GoCar Protect car, Ms. Ta Phuong Binh, an office worker in Hai Ba Trung district said that she has experienced GoCar Protect since the first day this service was introduced to Hanoi people on January 4, 2022. “As soon as I stepped into the car, observing the advanced safety measures installed inside such as screens and air purifiers, I immediately felt confident,” said Ms. Binh.

After more than half a month of regular use, Ms. Binh said she was impressed with the enthusiasm of the driver partners and the health and safety standards of GoCar Protect. In addition, the fast booking time, many promotional policies, and reasonable prices convinced her to use the new service.

Mr. Ta Truong Giang, owner of a private business, said that due to his year-end job, he had to travel a lot and often attend parties, so he chose to travel by technology vehicle instead of driving by himself. convenience and safety.

Already a loyal customer of Gojek, when he learned that GoCar was operating in Hanoi, he did not hesitate to book a car and immediately experience the technology car calling service with the standard “Antibacterial X3”.

With the company’s health and safety standards raised to the highest level, he said he was no longer concerned about the risk of disease transmission when he had to move continuously by technology cars. Besides service quality, one of the other reasons why Mr. Giang is attached to Gojek services is the team of driver partners who are always dedicated and happy.”GoCar Protect’s drivers have a service attitude. ‘very Gojek’, like when experiencing other service areas of this application”, this customer shared.

In the period when the epidemic has not ended and people have to live with the disease, drivers like Trinh Van Long are more worried about spreading the disease, due to the nature of their work, they have to interact with many customers every day. day.

According to him, the installation of the screen frame is a bit complicated, but it helps customers like him feel much more secure because it not only prevents droplets and limits the spread of disease, but also is a way to protect their health. drivers when the security situation at the end of the year has unpredictable developments.

With GoCar Protect, health and safety standards in the field of ride-hailing technology are raised up to 3 layers of protection. Firstly, all drivers have had 2 doses of Covid-19 vaccine at least after 14 days, the driver partner’s vaccination status information is clearly displayed right after the user orders a car.

Secondly, all cars are equipped with disinfectant solution, installed transparent shield to avoid close contact and prevent droplets between driver and passengers.

Third, all cars of the GoCar Protect series are equipped with Sharp air purifiers, proven to neutralize up to 99.4% of viruses and bacteria in the air.

Before launching in Hanoi, the first GoCar rides rolled in Ho Chi Minh City in August 2021, dedicated to transporting frontline medical personnel, and expanded to serve a large number of city users in November 2021.

With nearly 8 years of experience in driving technology, Mr. Duong Van Hung further shared that since becoming a driver partner to drive GoCar Protect until now, the daily revenue has been consistently around 2 million VND. Along with GoCar Protect’s “Anti-Bacterial X3” standards, driver partners are recommended by Gojek to strictly adhere to the 5K message.

Currently, on the GoPartner application for driver partners, Gojek has developed a feature that requires drivers to take a photo to confirm wearing a mask before they can log in to their account to start the day’s activities. During the operation, the driver partners are required to disinfect the vehicle continuously, before and after each trip, and at the same time keep the space in the car clear. Customers are also encouraged to adopt a cashless payment method on the Gojek app to limit exposure.

After more than half a month of entering the Hanoi market, GoCar Protect quickly became a transportation solution that was well-received by users in the capital. In the current context of ‘living together safely, flexibly adapting to the epidemic’, Gojek expects to be a pioneer service to raise the standards of health and safety in the field of ride-hailing technology in particular and in the future. transportation industry in general, during the epidemic period and also in the future, the representative of the carrier shared.