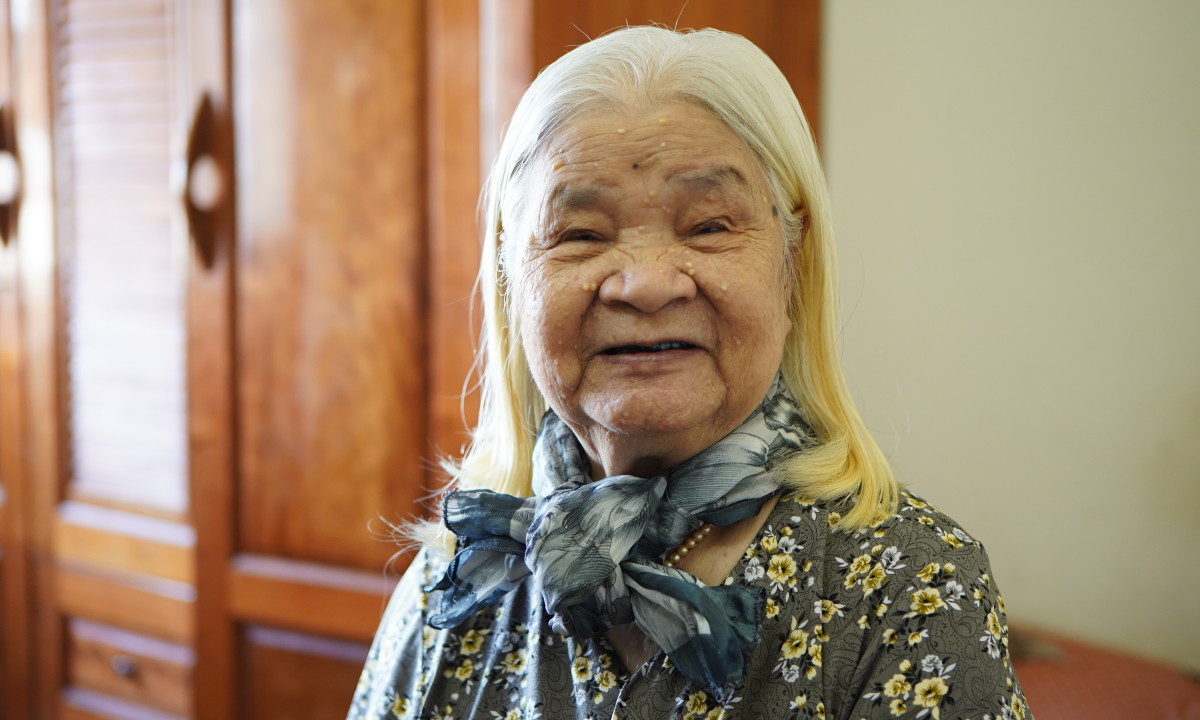 On the morning of July 1, Mrs. Pham Thi Lan washed her hair, combed her hair, then sat still on a chair listening to the gentle sound of scissors running through her hair that she had taken care of for more than 90 years.

For the first time in her life, a 93-year-old woman in Nam Tu Liem district (Hanoi) agreed to cut her heel-length hair that was raised since childhood on the condition that “it must be sent to cancer patients”.

“When I was young, my hair was as long as my back, then to my calves and touched the ground. Every time I washed my hair, it took a few hours. Someone once advised me to cut it short for convenience, but I refused,” he said.

The decision to give up her hair came from a time watching TV. Seeing some bald patients, Mrs. Lan wondered “why do women and girls have no hair?”. Granddaughter Do Tuyet Minh (34 years old) explained that people with cancer are undergoing radiation and chemotherapy, causing hair loss. She came up with the idea of ​​asking her grandmother to cut her hair to give them. At first, everyone in the family thought that Lan would not accept it, because it was taboo for the elderly to cut their hair. “But as soon as I said to give hair to the patient, helping them become more confident and beautiful, my grandmother immediately agreed,” Ms. Minh said.

Two days later, the white hair, sometimes with a few black strands, about 70 cm long was tied with a bow and carefully boxed and sent to the headquarters of the Vietnam Breast Cancer Network (BCVN) in Ho Chi Minh City.

On the afternoon of July 25, a representative of the Vietnam Breast Cancer Network said that she had received Mrs. Lan’s hair. “We are very surprised because we rarely receive white hair, at first we thought it was dyed or bleached hair. But when we contacted the donor and knew her story, everyone was touched,” the representative said. .

Two years ago, Minh Han, 28 years old, a Vietnamese international student in Germany started growing her hair with the plan that when she returned home, it would be long enough to cut for cancer patients. “I have a close friend who has this disease. Looking at your favorite long, jet-black hair that has to be cut off for treatment, I hope I can do something about it,” she said.

According to research, hair eligible for donation has a natural length of 25 cm or more (if processed hair must be 35 cm long). Hair that has been cut and kept for two years can also be donated, but must be tied and bundled. Originally liked to dye and style her hair, but Han decided to grow her hair naturally, not chemically. “For the past two years I’ve been trying to find natural ways to make my hair healthy, thick and long,” the 28-year-old said.

At the end of May, Han returned home to fulfill his promise. On the occasion of going to Ho Chi Minh City to play, she directly brought the hair longer than 30 cm as a gift. “That’s the first thing I want to do when I return to Vietnam, hoping to have more cancer patients confident in their new look,” said Han.

According to statistics from the Global Cancer Organization (Globocan), Vietnam is estimated to have 182,500 new cancer cases in 2020, the most common being liver, lung, breast, stomach and colorectal cancers. “When I return to Germany, I will continue to grow it because I know that the amount of donated hair is not enough to provide for all patients who need to borrow hair,” the female international student confided.

There are many people who decide to cut their hair to donate like Lan or Minh Han. According to BCVN, after 7 years of operation, the hair library has had about 14,000 donors, more than 1,200 sets of hair have been sent to patients at medical facilities and hospitals with oncology departments across the country. Currently, the unit receives about 100 curls of hair from all over the country every day.

In addition to individuals sending directly to BCVN, a number of community projects calling for hair donation have also been established, such as “Borahair – Purple Hair”, by the BTS fan community in Vietnam (JBTVN). ).

“Borahair – Purple hair” lasted 92 days, from March 15 to June 15 received 467 curls from 51 provinces and cities. Besides, JBTVN also called for donations to raise funds for making wigs and bras for patients with short breasts. After seven days, the fund reached the milestone of VND 18 million. Curls and donations were sent directly to BCVN on June 13.

Tran Ngoc Hieu Thao, a representative of JBTVN, said that in just three months of implementation, the project attracted thousands of participants, even a family of parents and children cut their hair to donate.

That is the case of Tran Minh Xuan, 19 years old, in Phu Nhuan district (HCMC). Xuan decided to cut her hair for 4 years to donate to the project after the time she went with her mother to volunteer in the hospital.

“This is my first time volunteering my hair. I want to give my hair back to cancer patients as a gift of encouragement, hoping they have a happier, more meaningful life,” the female student said. . She also invited her mother and 10-year-old youngest sister to join her.

At first, Tran Minh Thu, Xuan’s younger sister, hesitated for fear of being ugly and being teased by friends. “Many people with cancer after chemotherapy will lose all their hair, no longer beautiful. Thu’s hair is beautiful and long, I cut it for them”, Xuan encouraged her. The little girl nodded: “I really like long hair, because it’s beautiful. But if I give it to a sick person, I will cut it.”

Days later, Thu told her friend about donating hair to cancer patients and suddenly received a response. Many classmates made an appointment with Thu to grow their hair and donate in the next batch.

A representative of the Vietnam Breast Cancer Network expressed surprise when it first received the attention of a community of people with hair donation and actively contacted to do the project. In particular, the group has carefully classified and wrapped hair before sending, helping members save time.

“Not only donors, we clearly see the happiness and confidence of cancer patients when receiving new hair. The donation of hair is like an act of spiritual support for patients, helping them to be more confident and confident. I feel that I am not alone in my journey to fight cancer,” said a representative of BCVN.