In the third match of the 2022 AFC Champions League group stage, coach Kiatisuk’s HAGL will face the continent’s top rival, Korean champion Jeonbuk Hyundai Motors. The match will be broadcast at 6pm on April 22, 2022 on FPT Play’s multi-platform television system.

The first 2 matches of both HAGL and Jeonbuk Hyundai Motors have ended but they have not really got the desired results. Therefore, meeting in the third match of the AFC Champions League 2022 is really important for both.

Jeonbuk Hyundai Motors and personnel situation before the match with HAGL

In the continental playground, the representative of Korean football who won the AFC Champions League twice in 2006, 2016 should be considered as one of the championship candidates for this year’s tournament. That’s why coach Kim Sang Sik of this team confidently aims to win in the group stage.

Coach Kim Sang Sik shared: “Our goal in the domestic league is to win the K-League. In the AFC Champions League, we have to get through the group stage first. Our aim is to win all six matches even if we only need to win four. The match is already possible to win the right to continue. But in the immediate future, we will count each game one by one.”

Regarding the force situation, Jeonbuk has some notable national players. Along with that, they own a very scary trio of foreign strikers, Stanislav Iljutcenko, Modou Barrow and Gustavo. The sad news for the Kimchi team is that the main striker Gustavo is infected with Covid and has not been registered for the first leg matches. Besides the absence of Gustavo, Jeonbuk Hyundai also does not have the services of Moon Hwan Kim, Ja Ryong Koo and the goalkeeper who was called up to the Korean team Bum Keun Song for different reasons. In total, Jeonbuk only brought 23 players out of a total of 36 members of the delegation.

Sharing about HAGL with the competitors in the table, coach Kim Sang Sik said: “The teams in Group H are all strong, what we care about is the density of competition when we have to play every 3 days, in addition to weather conditions, food and many other factors. I was very impressed with the way HAGL played resiliently against Sydney FC. Their spirit is extremely commendable.”

HAGL and the spirit of comfort before the opponent

HAGL with 1 point obtained after the draw with Sydney FC is currently having reasonable moments of alternating practice and relaxation. The fact that HAGL players had a good performance against the opponent from Australia was a surprise. The brilliant performance of Van Thanh, Van Toan or Cong Phuong is recognized by many Asian experts.

HAGL’s ability to score points against rival Jeonbuk Hyundai Motors has also been clearly stated by Asian football experts. The most important thing is that HAGL keeps calm through each match and the players must show more than 100% of their abilities.

In addition, the good news for coach Kiatisuk is that midfielder Kim Dong Su can play in the match against Jeonbuk Hyundai Motors after undergoing treatment for the injury suffered in the second round.

Coach Kiatisuk is full of confidence with his students before the 3rd series (Source: HAGL Club)

Although there is a big difference in level with the opponent, the opportunity for HAGL before Jeonbuk is not necessarily gone. The Kiatisuk army can fully take advantage of the lack of force of the Korean team to aim for a good result. 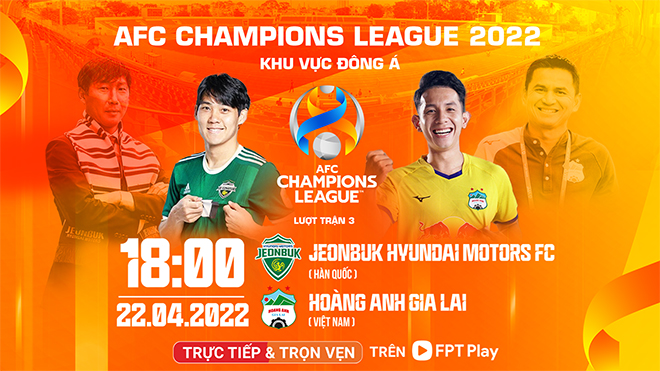 The match between HAGL and Jeonbuk will take place at 6pm on April 21. Audiences can watch the matches in Group H of the 2022 AFC Champions League, which will be reported live on channel VTV5, VTV6 of Vietnam Television. Besides, Vietnamese football fans can also register for a free account and watch completely, only on FPT Play’s OTT platforms.

In addition, FPT Play continues to hold the copyright and fully broadcast the 2022 AFC Cup in Vietnam market in the June period. This is a playground with the presence of another representative of the country’s football, namely, the national football team. Viettel FC.