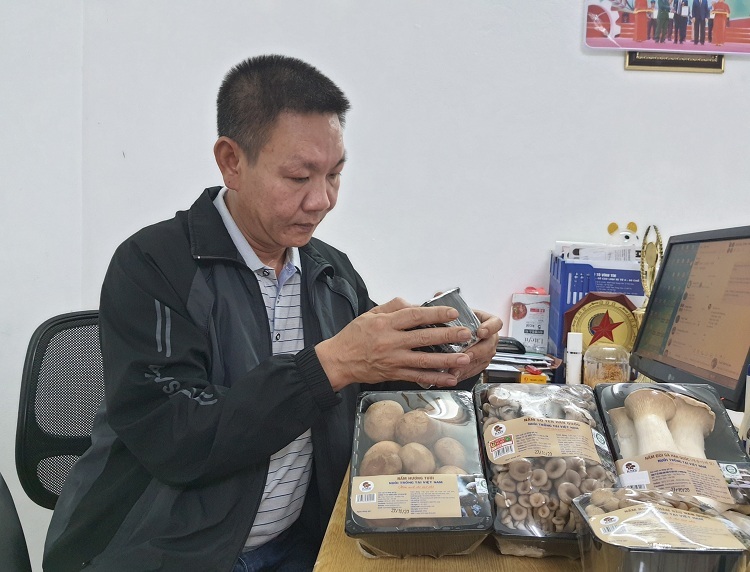 HanoiDuring the first two years of cultivating mushrooms, Trieu Quang Trung lost nearly 30 million VND every day because of broken mushrooms. Silver hair near the first half but he did not give up.

Driving his car neatly into the parking lot in front of the workshop, Mr. Trieu Quang Trung, 46 years old, hurried inside, changed into a specialized suit, rolled up his pants and started his daily work: Checking the progress growth of fungi. Finished work, passed the harvesting area, saw the staff carrying mushrooms on the truck, he also rolled up his hands to carry two boxes on the truck, then went on. The stranger coming to the workshop will not be able to guess who “boss Trung” is among the nearly a dozen men here.

Looking at his appearance, no one expected 6 years ago, while he was “booming” thanks to the imported Korean mushroom business and had tens of billions of dong in his hands, this man dared to break into the field of growing mushrooms and was nearly bankrupt because many years of failure.

Trieu Quang Trung’s adventure began with a visit of his Korean brother. While the two of them were going to the supermarket together, the older brother – who is a specialist in mushrooms – suddenly picked up a box of mushrooms, shook his head, smirked: “This poor quality thing in Korea people will throw it away, but here it is for sale.

Being a trainee and working for 12 years in the field of microbiology – edible mushrooms, medicinal mushrooms in Korea, Trung is very “thinking” with this statement. After a night of calculating, the man of Ha Thanh decided to step into a new field, in his mind was filled with the question of his brother: “Why don’t you grow clean mushrooms, but sell them to your people?”.

Hearing Trung discuss, his wife was startled, advised her husband to consider. Friends wondered: “There are several tens of billions in hand, lack of a way to both sit in the cold room and make quick money and go grow mushrooms. Are you crazy?”.

Handing over the business to his wife, the 40-year-old man brought 26 billion VND, both capital and loan, to order 17 containers of machinery and equipment from Korea to transport to Minh Phu commune, Soc Son district to start a business. Trieu Quang Trung’s mushroom production and consumption company appeared as a small dot on the “map” of Vietnamese businesses ever since.

In the 2,500 square meter workshop, he built a fourth grade house, with two employees and three seasonal workers. The bed is not yet. Cooking, washing, sweeping the house, the six people all shared their work. In the morning he got up earlier than the staff. They carried the machine, he also pushed the equipment back into the installation workshop. When the workshop was completed, it was the days when Trung boss wandered around Cao Bang, Hoa Binh, Bac Can, Lang Son … to buy corn cobs, sawdust for raw materials.

Everything looks good, but the first batch of finished mushrooms are not up to the standard despite following the correct recipe and procedure. He asked for help from the Korean expert, they just texted back: Check the material source, test the acid in the sawdust and the cob. Following that, he found out that many traders bought sawdust, the cob was soaked in rainwater, then dried it and sold it to himself. He told them: “Next time you dry it in the rain, let me support it, not sell it. You get a few million dong, and a batch of broken mushrooms, I lose nearly 30 million”.

The ingredients meet the standards, but the mold is green when the mold is green, when the mold is areca, the mold is plastered … Hundreds of batches of mushrooms are grown for 60 days to mature, they must be thrown away. Knowing the reason is that the raw material’s moisture content is not up to the standard, Trung stopped mass production. Every day, he planted a batch, rolled a mat each day to test different humidity. “Many times, the brothers joke and work until late at night, neither eat nor feel hungry. Everyone goes to bed, until 2-3 am, he still works,” said To Van Ngan, one of the first employees. Trung’s first recalls.

Working day-to-day, staying up at night to read documents, being on duty to see first-hand how mushrooms mature, “Hanoi farmer” only sleeps a few hours a day, even awake. But the results of the following batches of mushrooms are the same as the previous batches. The batches of mushrooms worth nearly 30 million are brought back to dump.

For three consecutive months, even though the workshop was only 20 kilometers from home, he still did not have time to visit his wife and children. The two children missed their father and his wife had to bring their children to visit. Seeing her husband white-haired, half-white, thin, black, the family’s sister said: “Do you work for a living or do you work to die?”. The wife advised her husband to quit, about business as before, but he did not listen.

There were days when the workplace was tense and there were only brief commands. “Do you have the correct procedure?”, Trung questioned his staff when another batch of mushrooms was broken. “You did the right thing”. “Right why this green mold!”, He exasperated. But soon he calmed down, encouraged the brothers to try together.

Mr. Ngan said, working together, he learned Trung’s persistence: “Losing a billion dollars, but still calm, keep calm. He’s passionate, he won’t give up whatever he says.”

But not everyone thinks like Mr. Ngan, some employees find that the business is unprofitable, so they are frustrated and resign. There is a friend who lends money, sees the risk of losing nothing, so he asks him to change his business. No convincing, the two are no longer as close as before. “Going through those days, I had to trade many things, not only money but also chipped feelings,” Trieu Quang Trung said.

Coming home, Trung was strongly opposed by his parents. Relatives, aunts, and uncles also blame the nephew “just going to put money somewhere”. Everything put on his shoulder made the man stuck. “I feel clear that I have the expertise and the technique, but I do not always succeed and sad because I cannot be trusted and supported by everyone,” he recalled.

He brought his story to share with his brother in Korea. “Rest assured, you will definitely succeed. Without money, you will lend money, the technology will need you to support. If you give up, you will not look at the face”, the man also successfully started a mushroom business before have modern, encouraging machines. Then, once a month, this person flew to Vietnam to advise Mr. Trung.

As if empowered, he continued to stay up all night working, sometimes not coming home for 5 months. Over two years, after nearly 1,200 batches of mushrooms tested, nearly 5 billion lost white, finally, he also determined that the moisture of sawdust to make mushrooms in Vietnam is 14%.

“Sweet results broke the pressure in me. The staff were also more enthusiastic. The meetings were no longer stressful,” Trung said.

But while relieving the production pressure, the fear of not selling goods weighed on his chest. He produces a ton of mushrooms a day, but he only sells 200kg. Customers who find mushrooms plump, eye-catching form are afraid of being “sprayed” or “imported from China”.

In those days, both the owner and the staff brought mushrooms to the homes of people around the workshop and more than 20 apartment blocks in Hanoi gave them free of charge to introduce, but no one dared to eat. The next day, in order to prove that the mushroom “Made in Vietnam” is true, Trung brings the mushrooms that have not yet been picked so that people can see firsthand and introduce the factory address. Some people knowledgeable about mushrooms agree to take it. Eat well, they introduced the groups to the actual survey workshop.

He also recruited people near the mushroom factory to work in order to make full use of available human resources and to let them know how to grow mushrooms in order to “have a good reputation”. Since then, customers come to Trung’s company every time.

Five types of mushrooms are launched to the market: swallow mushroom, black jade mushroom, white jade mushroom, shiitake mushroom, chicken drumstick, Trung Anh factory’s price is cheaper than import price, but more expensive than Chinese mushroom and traditional mushroom. Unable to compete on price, he turned to only producing mushrooms that China did not have, and at the same time surveyed the market.

Discovering Chinese mushroom distribution channels mainly in markets, he turned to approach big supermarkets and restaurants, at the same time, registered production according to VietGap standards to build customers’ confidence.

Looking at the achievements of Mr. Trung, those who left before wanted to come back, but were rejected. The brothers who followed him from the first day were given knowledge and skills to start their own business. “I’m glad I proved to everyone that my decision was not wrong. But my wife is still gossiping about ‘what are you doing’,” he laughed.

This year, because of Covid-19, the output of mushrooms exported to the market decreased by 40% compared to the same period last year. However, through many “storms”, this challenge, just like the “weakening pressure” came in his life “billionaire farmer”.