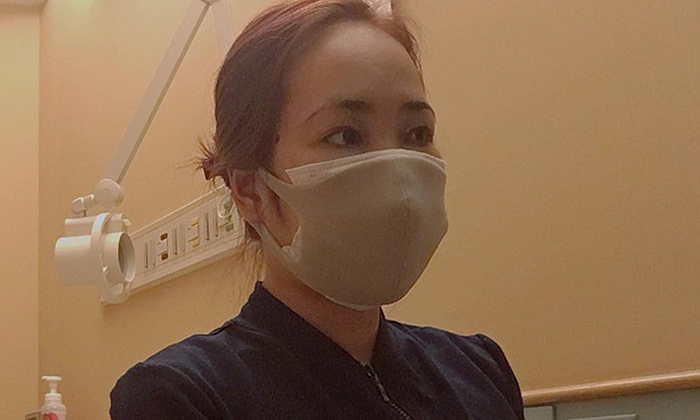 In Japan, Huong heard that Chi Linh in her hometown had 72 cases on January 28. Her memories of being a Covid -19 patient suddenly resounded.

Taking a deep breath, Vu Huong, 38 years old, a supermarket employee tries to focus on completing her job. At home, she immediately called her biological mother and two children (aged 9 and 12) and was shocked to learn that a parent of a student in her class was Covid-19 positive.

Seeing her birth mother in her 70s sobbing over the phone, the woman had to give back encouragement: “You need to be very calm. Given the current situation, it is likely that your family will have to be isolated and focused. Fall, who will take care of the kids? “.

But she only had a half correct prediction. Not the whole family was asked for concentrated isolation, but only Hai Ly, her first daughter – who belonged to F2. “Hearing the news that my child has to be isolated, my heart is strangled,” the mother said.

Her marriage broke down three years ago. But since the age of 5, Hai Ly and her sister have been living with their grandmother because their mother went to work as a labor export worker in Japan. She always teaches her first daughter “to be mature to take care of her mother”.

More than anyone else, Huong understands what it feels like to become a victim of a pandemic. Three months ago, she received news that she was positive for nCoV in a foreign country. At that time, in the building of 24 Vietnamese women living in Tokyo, there was one positive person, so all were asked to be tested.

The days of waiting for results, she did not eat well. In the room, she and a friend almost suffocated because they turned on the air-conditioner at the highest temperature to let the virus die hot. Then, they opened the window again for the “virus to fly out”. Reading the news that millions of people died of Covid-19, a Vietnamese woman panicked. Bedtime Huong also wears a mask. Before the building was sealed off, her roommate showed flu symptoms and lost her sense of taste, so she was even more nervous.

On the morning of November 2, Huong received a letter informing him of the test result: “We are sorry to announce that the first test shows that you are positive for the virus”. Her eyes were blurred. Instantly, images of her two daughters and an old mother appeared in her mind. Without any manifestation of the disease, secretly hoping for luck, the positive result immediately knocked her down. She seemed worried if she accidentally died of Covid-19, the children and old mother would be helpless.

The woman grabbed the phone to make video calls to the mother and the children. “Will you die if you have Covid?”, The third-grade girl burst into sobs. Huong suddenly realized that if she was not strong now, not only would she suffer, but her children would suffer more disadvantages. Huong told her mother: “There is no signal at the hospital, please don’t call me”. Actually, Huong was lying.

The next day, Huong had an overall health check and had a second test. This time, the results showed that Ms. Vu Huong was negative for Covid-19. The burden is relieved. She continued to spend four days at the hospital following regulations. On the sixth day, Ms. Huong was able to quarantine herself for 14 days.

The plan to return home on the New Year and celebrate the Lunar New Year with the children was canceled due to the complicated epidemic situation. She also tested positive, so she was afraid that the move would affect her children, to her homeland.

After her daughter announced she was alone in the quarantine, she immediately called back, trying not to shed tears. “I’m fine, mom. There are friends and teachers with me. I can stay with my best friends so I’m not sad”, Hai Ly calmly replied to her mother.

Ms. Huong believes her child is sharing her true feelings. Away from her parents, since childhood, Hai Ly has been very independent. I know to help my grandmother do housework, cook meals and wash dishes. After chatting with her children, Huong reassured her mother and told her that if there were vegetables and ripe bananas in the garden, she would send them to Hai Ly’s room.

On the first day of “admission”, the grade 6 girl shared a room with 7 other friends and a parent. The furniture in the classroom has all been moved out. Hai Ly and his friends spread blankets and mattresses as a place to rest. Get acquainted, the children talk through masks all the time. In the afternoon, Hai Ly and her friends showered with clothes, bewildered because they did not know where to bathe.

On the first day, they were only allowed to change clothes. But the very next day, the bathhouse was built at the foot of the two-story building. A hot water heater was also installed. Heard, Ms. Huong less pity her child.

“I came home late from work, but my mother called every day to ask if my child was fine, to advise on what to eat,” Hai Ly said. Every day, eight children take turns sending a friend to receive meals for the room. They lined up, keeping a distance of 2 meters.

The children do personal hygiene and laundry. Hai Ly was praised by the only parent in the room: “Many children come here to wash clothes and eat by themselves, but Hai Ly is very independent and self-conscious, no one has to remind”.

But in the room, parents and medical staff often have to remind because the children close to them often forget they are in isolation. “One day the medical staff will come to take their temperature two to three times,” Hai Ly told her mother.

One day, calling a video, seeing her daughter only ate half of her meal, Huong scolded. “But the rice is hard, Mom!”, Hai Ly and her friends took turns replying. “The children are isolated, but they are ten thousand times happier than those who are serving them. Eating all of the rice is not only for health, but also shows respect to those who are struggling to take care of them”, she told her. Hai Ly and her friend.

The happiest thing of Ms. Huong is that after a week of isolation, her daughter has had unforgettable memories in her life. Half a month ago, Hai Ly and her best friend had a conflict, not looking at each other. Living in the same room under special circumstances, with no parents around, the two talked again. “We shared the food. Hugging each other. That was good,” she boasted to her mother. In addition to the minutes of jogging in the school yard, playing badminton, jumping rope, the kids spent a few hours studying. Hai Ly has just completed a picture of encouraging people to prevent Covid-19. Under the corner of the picture, the child wrote: “Chi Linh! Fighting! Let’s overcome the campaign (pandemic) together!”.

On the days of Tet, Hai Ly and her friends in the room are drawing peaches and banh chung on the board to bring spring air to the isolation area.

More than 3,600 km away from her child, now Ms. Vu Huong feels relieved when she hears her text: “It’s a little better to be isolated than at home”.

A few days ago, Ms. Huong sent a sum of money to the Vietnam Fatherland Front to support the prevention of Covid-19 and a donation to Sao Do Secondary School.

“I would like to thank the State for creating the best conditions for my children. No matter how modern the medical care is in foreign countries, I still believe it cannot be equal to my own country. Because nowhere, people are united, The government is devoted to the people like Vietnam, “the mother said.