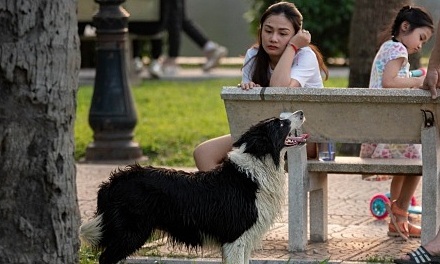 Three months ago, the apartment of Ms. Tran Ngan, 28 years old, in District 2, Ho Chi Minh City held a meeting of residents just to discuss: Should dogs and cats be allowed?

As a result, 76% of residents agreed that keeping dogs and cats in an apartment building must ensure the sanctions set forth by the management. There are 11 regulations that pet owners must follow such as: each household can only keep a maximum of two children, each pet must deposit 5 million VND in an account, deducted from the fine for each violation, and must wear an identification code. There are 5 things farmers have to do and 4 things they can’t do.

“This is the solution we came up with after the persistent controversy of the residents. On the social networking group, every time when it comes to this topic, people ‘war’ very fiercely, dividing sides and condemning each other. We cannot be ignored,” said a representative of the management board.

Ngan said that her family’s “dog” is trained to go to the toilet on time and according to regulations. When going up and down the apartment, she takes the cargo ladder, always holds the dog in her hand or puts it in a specialized bag, without affecting the people around.

Therefore, Ngan was shocked when he read the regulations just approved by the apartment conference. In July, she went abroad for work, when she returned home, everything was over. Not wanting trouble, Ngan and her husband paid a deposit and put on a card for the 4-year-old Corgi dog.

The afternoon walks of Ngan and her husband and their pets are no longer as comfortable as before. According to the regulations, her dog must muzzle when going out, not to go through the apartment lobby and not to run and jump on the grass as before. All activities of pet residents are closely monitored by security teams and cameras.

“My baby has a long snout structure but is still panting when he is muzzled, other children with a short snout, normally have difficulty breathing, if the muzzle is added, it is no different from being tortured,” she said.

Regulations promulgated, some residents who have not yet worn identification cards for pets are kept when going up and down the building, clashing with security. The incident was posted on social networks, prolonging the controversy over pet ownership in this apartment building.

When people like Ngan were upset, Mr. Ngo Tinh, 38, showed interest. “These regulations should have been in place a long time ago,” he said.

Tinh’s neighbor has a dog. Many days, it was very difficult for him and his wife to coax the child to sleep, when the neighbor’s dog barked loudly, the baby startled and cried loudly. Not to mention, many times it ran to his door without muzzle when his son was crawling on the floor. Anh was concerned that if no one was there, his child might be bitten, risking rabies.

Controversy about raising cats and dogs in Ms. Ngan’s area is a typical story in many urban apartments. According to the survey of VnExpress With nearly 30 residents in Hanoi and Ho Chi Minh City, 90% said that where they live there are regulations banning dogs and cats, but residents still secretly raise them, causing discomfort to them and those around them. controversy in apartment groups.

Dr. Truong Hoang Truong, Dean of the Department of Urban Studies, University of Social Sciences and Humanities, Ho Chi Minh City, said that the controversy over raising dogs and cats in apartments is not a big problem compared to other shortcomings. However, if the management, the management board behaves badly, it will become a big problem.

Mr. Truong said that the cause of these controversies is that a part of pet owners lack awareness, affecting others.

A representative of the management board where Ms. Ngan lives agreed with this idea and affirmed that not all households know how to maintain common spaces when raising pets. Elevators, community campus often appear dog and cat feces, causing frustration for other residents. The apartment operator and security guard, even though they are not responsible for cleaning up pet feces, still have to do it.

Mr. Huynh Huu Phuong, a member of the management board of an apartment building in Nha Be district, said that pets are prohibited in the place where he lives, but the elevators and apartment halls often appear waste from dogs and cats, causing frustration in the community. copper.

“Keeping a pet in the apartment is very annoying, the smell, the barking, the risk of disease, not to mention some large-sized dogs that are dangerous. If everyone just wants to do whatever they want, they can go to the townhouse. but live,” Phuong said.

In addition to the story of consciousness, according to Dr. Truong, public space in Vietnam is not much, the density of residents in apartment buildings is high. Meanwhile, very few investors pay attention to the arrangement of space specifically for dogs and cats, so it happens that owners take their animals to the street in the early morning, late afternoon or go to the park to defecate. “Sometimes neighbors also like pets, but if it affects the environment, they won’t be happy,” he said.

Meanwhile, statistics show that in Ho Chi Minh City, the population density is higher than in Hanoi.

A representative of the management board where Ms. Ngan lives admitted, when building, the investor did not plan any public space or infrastructure for pet households. “The law does not prohibit it, the management board does not prohibit it, so residents were not bound before. When the sanctions were issued, the farmer who was comfortable was suddenly controlled, so he became upset,” he said. .

According to Dr. Truong Hoang Truong, the apartment is a place where many residents live together, not as simple as townhouses or urban areas, so raising dogs and cats is not suitable for hygiene, beauty and environment. Animals scattered in households can cause epidemics, bite people if not protected, and cause insecurity for residents, especially families with young children.

There are 63% of the total 400 readers who participated in the survey of VnExpress Agree with Mr. Truong, that it is absolutely forbidden to keep pets in the apartment. 35% agree with the solution of raising pets but must ensure that it does not affect other residents; Only 2% think it is necessary to allow pets in apartments, because it is a personal right.

Mr. Truong said that, if allowed to breed, the apartments need to have a safe management method, arrange a dedicated area for dogs and cats in a place suitable for their activities. Management boards of apartments should make regulations on where pets can go, so as to cause less danger and not affect the landscape and the lives of others. Of course, these regulations must be agreed upon by the majority of residents.

While establishing regulations on how to raise dogs and cats as suggested by Mr. Truong, the representative of the management board where Ms. Ngan lives believes that at first people can react, but when they adapt, they will find it effective and efficient. response.

Huynh Huu Phuong in Nha Be said that after the fierce controversy at the apartment building, at the end of this October, the management board will hold a conference and vote to decide whether residents are allowed to have pets or not. .

“Actually, in an apartment building, sometimes love is heavier than reason. A resident told me ‘she’s old, she only has a dog as a friend, now you forbid her to be sad'”, he said. If 51% of residents agree to be allowed to keep dogs and cats, Mr. Phuong and the management board will set out regulations to raise the awareness of owners and avoid causing frustration among residents.

Also at the end of October, Ngan and her husband will move out of the apartment they live in, because they are not comfortable with the regulations that pet owners like her have to follow.

“I left the apartment I bought to rent here a year ago because I had a comfortable pet, but now the comfort is gone,” she sighed.

The resident’s name has been changed.