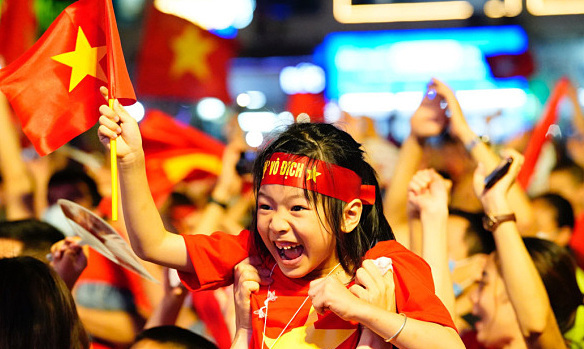 “Let’s go to the storm!”, Mr. Nguyen Quang Tuan shouted when player Nham Manh Dung scored in the 83rd minute, helping Vietnam get another gold medal in men’s football, on the evening of May 22.

“So proud, I can’t miss the celebration when Vietnam first defeated Thailand in the final,” said Tuan, who has accompanied the national team for 20 years through eight SEA Games. Despite the rain after the match, he held a flag and a drum around his neck to join the crowd cheering on the street.

This is the second time the 73-year-old man from Thanh Xuan district, Hanoi “goes into a storm” through the night. Before that, he used to ride a motorbike through 36 streets, shouting “Vietnam is champion”, when Vietnam won the AFF Suzuki Cup in 2018.

“Going the storm” was first recorded in Vietnam in 1995, when the football team won a silver medal at the SEA Games. Since then, this activity has become a feature of fans whenever the home team has an important victory at major tournaments.

Twenty years after the Vietnamese sports delegation traveled throughout Southeast Asia, Mr. Tuan said, nowhere else is the enthusiasm of the people to show the spirit of love for sports like in Vietnam. He has witnessed in other countries, when he won the gold medal, the fans just shouted on the field and returned home quietly.

Two weeks into the 31st SEA Games, the media and people of many Southeast Asian countries have praised the enthusiastic spirit of the host country’s fans. In all competitions, there is always a large audience to cheer.

Before the group stage match between Singapore U23 and Laos U23, Thien Truong Stadium (Nam Dinh) was filled with the audience with 60 trumpeters and 18 Vietnamese drummers. Fans also organize parades, cheering for your team. Fanpage ASEAN Football The stadium in Nam Dinh city has set a record for the match with the most spectators at a neutral venue in the history of the SEA Games, with 30,000 fans.

Not only football, but sports that are often sparsely watched, such as basketball, athletics, swimming, fencing… also recorded a record number of spectators. Nguyen Trong Ho, Director of the National Sports Complex, said that on average, each athletics match at SEA Games 31 attracts more than 10,000 spectators, about 20 times more than other tournaments. Some private competition areas such as swimming and archery sometimes have to close or stop accepting spectators because of overcrowding.

“The most impressive thing at this year’s SEA Games is the support of the people,” said Tran Duc Phan, head of the Vietnamese sports delegation at the 31st SEA Games. “The organizers were extremely surprised because a lot of people came to the field. Sports have entered the lives and activities of all Vietnamese people.”

Since the opening day of SEA Games 31, Binh Minh, 30 years old, Hoang Mai district has been cheering for the competing teams. “I can’t go to all the matches due to the overlapping schedule and distribution in many provinces. But every day I try to go to a stadium, a stadium in Hanoi. At the weekend, I will choose one of the provinces in Ha. Nam, Bac Ninh, Hai Phong, Quang Ninh go to cheer,” Minh said.

To avoid affecting his work, he applied to work online, handling work at night or early in the morning. In the past two weeks, Binh Minh has realized that he is not unique because at every competition point, the stands have never cooled down. Dance sports, dancesport, fencing, swimming, and table tennis are always full of people, even in the middle of the week.

“It is a great motivation for us to have more motivation, will and determination to achieve the best, bring glory to the country,” said long jump athlete Bui Thi Thu Thao, medal winner. silver at SEA Games 31 said.

The female athlete said that at the 31st SEA Games, in the stands of few or no antagonistic sports, an average of about 10,000 spectators – something she and her teammates had never seen before when competing abroad. .

“Besides cheering for the home team, the Vietnamese are very enthusiastic about the away team. Many athletes from your country expressed their emotions when they felt like playing at home,” said Thu Thao.

“I thought I was playing at home. The Vietnamese cheered me on every lap. They kept clapping their hands, shouting Timor Leste’s name. That was probably my motivation to finish the competition well,” Felisberto said. .

And Timor Leste’s athletics coach constantly bows and says thank you when mentioning the Vietnamese. “We were surprised to find that we were not alone in celebrating the victory because thousands of people were clapping behind us. There has never been a country where we have come to compete where the people have cheered and treated us as well as they did. Vietnam”, Felisberto’s coach, expressed.

Coach Michael Weiss of the Laos U23 team expressed his surprise by the enthusiastic cheering of the audience on Thien Truong Stadium (Nam Dinh). “These will be good memories for Laos U23 members and the whole team. We have the feeling of playing at home,” said Michael Weiss after the match on May 7.

Following closely the journey of the Lao sports delegation, Noly Xaythideth, 26 years old, in Vientiane expressed her gratitude to know that her and other countries’ delegations were enthusiastically “fired” by Vietnamese fans. “Especially in matches with the Lao team, Vietnamese people come in large numbers. They bring flags and drums to cheer, and the stands are always full of people. This makes me feel warm,” Noly Xaythideth expressed. .

Noly Xaythideth admits that the passion and sportsmanship of the Lao people is not equal to that of Vietnam because of the small population and the low number of people interested. In particular, the image of the stands covered in national red or storming through the night has never happened in Laos. “The atmosphere and enthusiasm in Vietnam is rare for any other country in the ASEAN community,” said the 26-year-old.

“It is pride, national pride,” said Dr. Nguyen Anh Hong, a cultural researcher. According to her, the fact that people lined up and sat on the stands at the 31 SEA Games to cheer them on showed both their love of sport and their desire to relieve their mind after a long stretch of time. way because of disease.

“They bring to the stands a vibrant, enthusiastic atmosphere instead of focusing on winning and losing,” the researcher said.

Explaining more about the reason why Vietnamese fans are increasingly interested in sports, cultural expert Nguyen Hung Vy, former lecturer at the University of Social Sciences and Humanities, Vietnam National University, Hanoi, said that is patriotism, national pride mixed with the spirit of sport, based on the principles of transparency, equality, kindness and impartiality.

“Besides, the development of media and mass sports movement has been promoted; the purpose of the SEA Games organizers is to divide the sports into many provinces and cities, creating favorable conditions for enthusiasts. being approached; plus the mentality of wanting to go out after two years of the epidemic is the reason why the stands are always full of people,” Mr. Vy said.

Talking about the development of the country’s sports, Mr. Hung Vy said that it took Vietnam nearly 40 years, from a country with poor physical strength to assert its leading position in the professional competition arena.

The 22nd SEA Games has marked a turning point for Vietnamese sports. At the end of the congress, the Vietnamese delegation had 752 athletes, leading the standings with 158 gold medals, nearly twice as much as Thailand’s second team. In addition, the delegation had 97 silver medals and 91 bronze medals. At the 31st SEA Games, the whole delegation recorded 446 medals, of which 205 gold medals.

“It is a long process of effort, perseverance, we have the right to be proud. I am sure that at the next Games, the support of the Vietnamese people is the motivation for the athletes to achieve good results. Especially, the movement to promote civilization in the stands will be increasingly replicated”, the researcher expressed.

At the age of 73, Mr. Quang Tuan still plans to prepare with the Vietnamese sports delegation to Cambodia for the 2023 SEA Games. “I look forward to standing with the team, so that the athletes can compete in the best spirit. spread the spirit of love for sports and enthusiasm on the Vietnamese stands to friends from other countries in the region,” he said with a laugh.