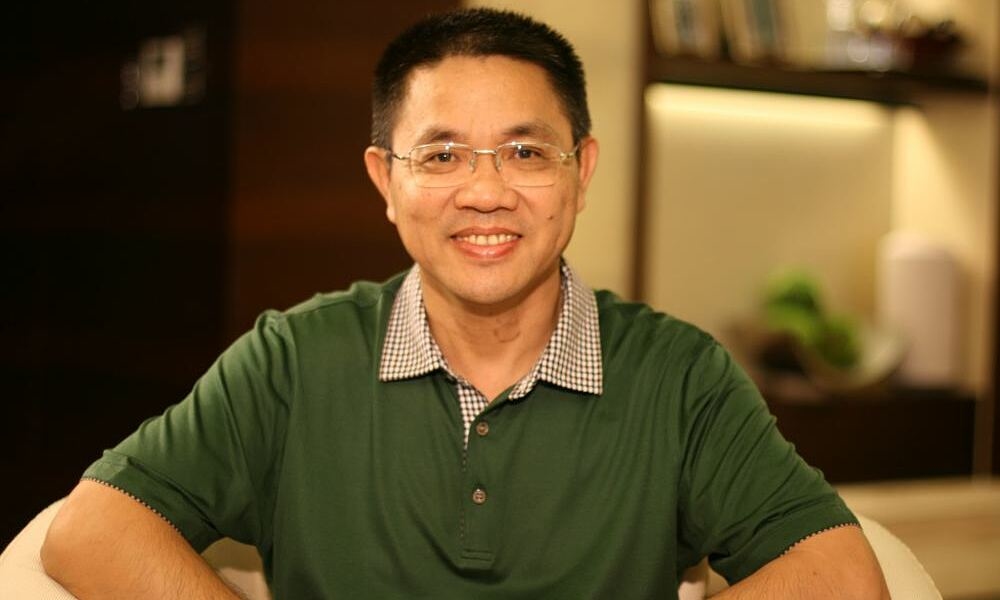 The man who built the villa for the whole village is Tran Sinh, 60 years old, chairman of Tiandi No 1 Beverage Inc., owner of high-end pork chain Yihao Tuzhu and a famous real estate giant.

Mr. Tran Sinh was born in Guanhu village in 1962, in a family of 5 siblings, his father died early. Guanhu was originally a poverty-stricken mountain village with the nickname “unmarried village”, because women all married elsewhere to escape poverty, leaving behind unmarried boys.

The family was poor, many times the boy Tran Sinh wanted to drop out of school to work, but because he was a good student, his mother persuaded him to continue going to school. In 1980, Tran Sinh graduated from university and was in danger of having to drop out because his family had no money. One day, the villagers came and said: “Tran Sinh’s mother should not think short, but look long. Our village finally has a university student, so we cannot help but send him to school”.

The village elders gave Sinh a crumpled stack of coins with a lot of change. A total of 21 yuan. With great gratitude, Chen Sheng took the 21 yuan and boarded the train to Peking University.

After graduating, Tran Sinh worked as a clerk at the Guangzhou City Party Committee. The mother is very satisfied with her son’s job, the salary is low but stable. Song Tran Sinh decided to quit his job, switch to the farming and breeding industry, and then to the real estate business. After only three years, the young man became a billionaire and Sinh’s company became one of the three largest real estate companies in Zhanjiang.

Still not satisfied, Tran Sinh entered the beverage industry, and then the pork business. In 2008, he contributed capital to Luc Bo Hien, a junior in the last class of the university, to set up a “butcher school” specializing in teaching about pork. Currently, this is still the only school that only teaches about livestock and pork trade in China, training more than 6,000 students.

Together they built the Yihao Tuzhu pork brand, a high-quality pork famous throughout China. Yihao Tuzhu is present in 30 major provinces and cities, with revenue reaching 1.8 billion yuan in 2018.

In 2013, the old poor boy Tran Sinh returned to the village to repay everyone. He spent 200 million yuan building 258 luxury villas on land provided by the local government. Each villa has an area of ​​280 m2, 5 bedrooms, two living rooms, a garage and a garden. In the new residential area there is also a park with a stream, a bridge, a soccer field and a stage for community events.

At the end of 2017, the new residential area was completed but could not be handed over because many expatriates now return to ask for houses, many families ask for two apartments. Speaking to the press that year, Tran Sinh said that he built the villa based on the government’s census in 2013, there were 190 households at that time, but he built nearly 70 more houses.

The local government had to hold many meetings to come to an agreement. On June 4, 2018, Tran Sinh and his elderly mother returned to the village, giving the keys to each household to enter the new villa. He also spent several hundred million yuan to rebuild local schools, subsidized teachers’ salaries, and used this policy to attract good teachers to the village.

Although the education level of the local people has improved and education is a long-term strategy, Guanhu village is still in ruins when people leave the village to work in the streets. After considering the soil and climate conditions in the village, this billionaire decided to help people grow lychee and raise pigs. It is he who guarantees the output for them.

With a long-term vision, Tran Sinh also invests in building rows of small villas in his hometown to develop rural tourism. Today’s Guanhu village has neat rows of villas and has further developed a rural tourism industry, which can reach a per capita income of 30,000 yuan per year (108 million VND).

As a person who has been in the market for many years, Tran Sinh understands a truth that “depending on mountains and landslides; relying on rivers and rivers flowing; relying on people and people walking. Only relying on oneself can survive for a long time”. So not only did he provide people with food and shelter, he also provided a means for them to be independent on their own two feet.

“Tomorrow, I will also grow old and return to my ancestors. For me, being able to build villas for everyone and help people raise pigs is a very happy thing. I hope everyone can take care of the world. their descendants, so that they have the conditions to study, develop and succeed,” he said.

Bao Nhien (According to QQ)