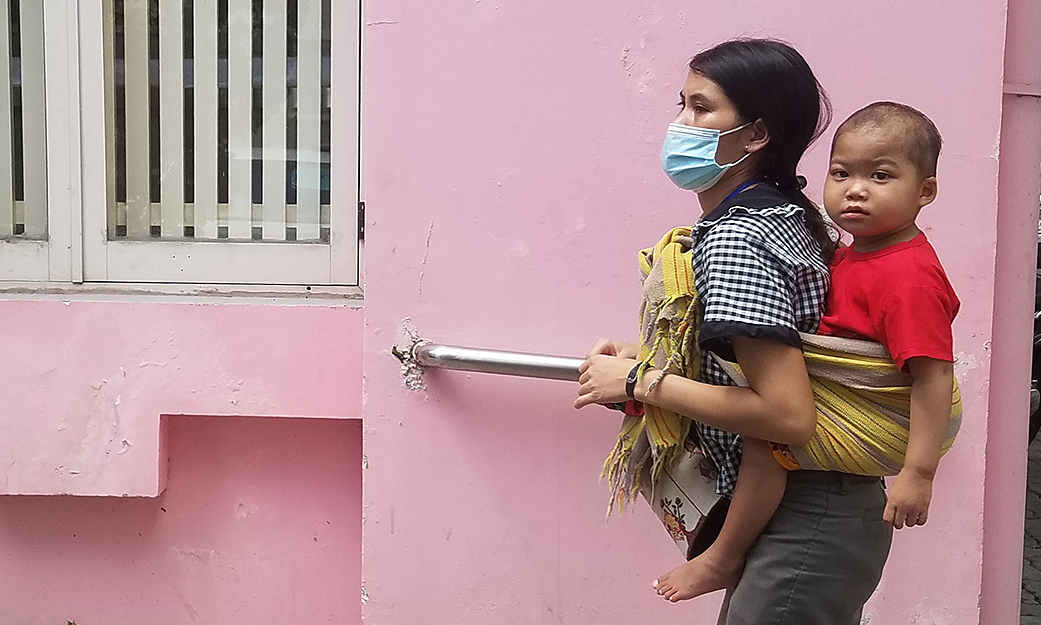 HueAfter sending the child to the hospital, Beng’s husband brought the old motorbike around Pleiku city, selling it for 8 million VND, to advance hospital fees.

When taking her child to Gia Lai Provincial General Hospital, she still had 2 million VND in her pocket to borrow from a neighbor. After completing the admission procedure, you sit and wait for the results. The doctor informed that her child had blood cancer, Ms. Beng broke down, crying red eyes. In the afternoon, the hospital announced that “I have to go to Hue for treatment”, the hospital car will support, the family will take care of the meals.

“What will happen to my baby?”, Mrs. Beng wiped her tears and asked the doctor. “With good treatment, you will recover, don’t worry too much,” the doctor replied.

Ms. Beng, 24 years old, ethnic Bana, in Kon Chieng commune, Mang Yang district, Gia Lai province. When she just turned 18, Beng married Mr. Hnginh. The couple live together in a wooden house with a fibro-cement roof on the inner side.

In the land of coffee and pepper, Beng’s family does not have a garden, the economy only relies on a small field. A year later, Beng gave birth to her first daughter. The couple worked hard to do business, raise their children and their elderly mother-in-law.

In 2018, the second child named Yak was born. When the boy was one year old, during a visit to the doctor, the doctor diagnosed him with pneumonia, and had to regularly take medicine to treat it. The family was already difficult, running to eat every meal, now more money for medicine for their children, the Beng couple could barely manage.

The illness did not stop with Jacob. One morning at the end of July 2021, when Yako was sleeping, Beng woke up her son and saw that his eyes were swollen, and there was a big lump under his chin.

“What’s wrong with you?”, Beng asked her son, but he couldn’t answer. She turned to ask her husband. Hngnh also did not know what was wrong with her son. The two took their child to Mang Yang District Hospital for examination. The doctor told the couple that they needed to bring their child to the upper level for examination. Beng still doesn’t think her son has cancer.

The couple returned home, borrowed money and took their children to the Provincial General Hospital.

From the provincial General Hospital, Ms. Beng and her husband continued a long journey when the doctors told them to take her to Hue. This is the longest journey Beng has ever traveled.

In the morning, the car arrives in the city. The bus continued to transfer 3 people directly to Hue Central Hospital 2, 25 km from the city. Moving again, she felt exhausted. It was July 29, 2021. Beng still remembers vividly the day he arrived in Hue.

Hospitalized for the child at the time of the outbreak of the Covid-19 epidemic, the hospital only allowed one relative to take care of him. “I stayed to take care of the children. I took the car back to my hometown to work and then took care of my mother and children in the countryside,” Beng told her husband.

For 2 months, Beng stayed at the hospital to raise her child. Every night, Yak cried, demanding to go back to his father and sister, and to his grandmother in the countryside. She can only encourage her children to “stay and heal and then return”. When he cried and asked to return, Beng carried him around the hospital campus. She took her children to the gate, overlooking the Perfume River, on the other side were the Hue Citadel, Ky Dai… the beautiful things that she often saw when she watched on the neighbor’s TV. Beng hopes to one day go to Hue to play, but did not expect that the first trip to this land would be to take her children to the hospital.

“The doctor said that if I want to heal, I have to stay here for a long time,” Beng said. In room 504, 5th floor, Pediatric Oncology Department, Hue Central Hospital, Beng’s mother and daughter live and work together with other cancer patients. Her bed was right next to the door. Beng arranged everything neatly. “The doctor said that if you want to heal quickly, you must keep your hygiene very clean,” Beng remembered the advice and always followed it.

Beng’s mother and daughter are often given money and help by sponsors. Her food and water are supported by the units for free. Yak’s meal sometimes had to change according to his health situation. “I’m better than before, my eyes are no longer swollen and the lump is smaller,” Beng said.

Being hospitalized on the right days of the epidemic, Beng became more and more worried. She is afraid “if I get more Covid-19 it will be miserable”. Knowing that, Beng always wears a mask. Ya-Ko did not, he was annoyed with his masked face. I took off the mask and threw it away, Beng picked it up and brought it to me and said, “Do you want to get well and go home”. Hearing this, Yak left his mother to bring it in, but after a while he also took it off.

At the age of three, he was able to walk and talk, but his illness made it more difficult for him to walk. Now, Beng has to teach her to walk again. The talk of Yako is also clear and sometimes not.

Doctor Nguyen Thi Kim Hoa, Deputy Head of the Department of Pediatric Oncology, said that Ya Ko had blood cancer, the treatment process had to go through 6 rounds, then she could go home for 28 days, then return to Hue for injections. drugs and intramedullary pumps.

“Yako is currently undergoing treatment in the consolidation phase. It will take nearly a year to complete the 6 rounds of treatment. Due to the epidemic, it is difficult to travel, so Yako’s treatment will stay for a long time with him. The hospital won’t come back until it’s okay. To completely cure this disease, it also takes 3-4 years, “doctor Hoa said.

Currently, Yako is supported by the Sun Hope program with 80 million VND for treatment at Hue Central Hospital. According to Dr. Hoa, this money “can be enough to pay for treatment” so it will be of great help to Yak’s family.

With the goal of igniting the faith of children with cancer, the Hope Foundation cooperates with the Mr. Sun program to launch the Sun of Hope program. One more of your cooperation is another ray of light to the future generations of the country. Please see information about the program here.