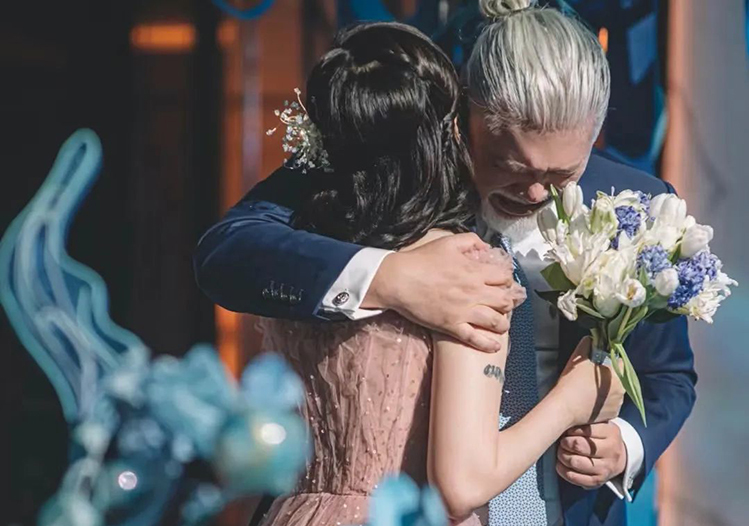 ChinaBefore his wife lost her memory completely, Thuy Ca wanted her to wear a wedding dress – something he could not do 25 years ago.

At 8 am, after helping his wife wash her face, Thuy Ca prepared medicine for her to drink. On the sofa, his wife, Cathleen, sat attentively watching the news on the television. Unknowingly she turned her head and asked Thuy Ca: “Have you taken your medicine? Why can’t you remember anything?”

Thuy Ca and Cathleen’s marriage has entered its 26th year. Three years ago, his wife’s dementia became a difficult problem that both had to face. “Where is this place?”, “What day is it today?”, “What do we plan to do today?”… Every day, Cathleen repeated the same question.

“I have answered those questions a thousand times, the future will continue to answer,” said Shui Ge, 52, living in the city of Tianjin.

Cathleen’s dementia is not much different from Alzheimer’s disease in the elderly. She is 49 years old, ovarian cancer from three years ago caused her memory to gradually fade.

Three years ago, receiving news of his wife’s malignant tumor, Thuy Ca, the director of a construction materials company, cried. “Don’t be afraid, I’ll be right back,” he said, then flew from the US to Shanghai overnight.

The wife then underwent surgery to remove the tumor. After four rounds of chemotherapy, cancer cells are still mixed in. In 2020, Thuy Ca took his wife to the US for treatment, Cathleen began to lose her memories from that time.

Information about his wife’s memory loss made Thuy Ca very scared. The memories they kept together are now only his. To him, Cathleen’s illness was like a flood, coming suddenly and wiping out everything it came across.

The end of 2021, marks the couple’s 25th wedding anniversary. When she was sober, Cathleen once wanted the couple to have a silver wedding. “25 years ago, because of our circumstances, we did not have a proper wedding. Cathleen has never worn a wedding dress,” Thuy Ca shared.

At that time, Shui Ge was a security guard at the skating rink at an amusement park in Tianjin. One day Cathleen, an employee of a multinational company, and her colleagues came here to play. Seeing the little girl panicking while standing on the skates, he volunteered to teach her the initial moves. After many times Cathleen came here, their feelings gradually blossomed.

As a security guard, Thuy Ca mustered up the courage to ask Cathleen. “At that time, there was a difference between us in terms of qualifications and work,” Thuy Ca said that being accepted by Cathleen was something he had never dreamed of.

Their wedding was held in 1996, only a few friends attended due to the bride’s family opposed. Because they are both poor, Cathleen only wears white clothes borrowed from a friend, and the groom wears a rented suit. “Riding a taxi to the wedding school, the driver thought we were guests to the wedding, until he saw flowers on both of them,” Thuy Ca recalled. Seeing the bride’s face down, he told his heart when eligible, he would organize a proper wedding for his wife.

In 2002, the couple founded a building materials trading company. At the beginning of his career, this man did not even know how to type on a computer, his wife graciously taught him every step of the way. In joint work, Cathleen actively deals with customers, while Thuy Ca quietly follows and supports.

But all those memories, until now, Cathleen also forgot all.

In 2020, when she came to the US for treatment, she had two seizures, the doctor advised her husband to prepare for the aftermath. Bringing his wife back to China, Cathleen continued to have a third seizure. However, she then miraculously recovered, only many of her memories were gone.

Doctors say that memory loss can sometimes be a good thing. From now on in Cathleen’s life there are no painful memories of illness but only happy ones.

Thuy Ca understands this very well. Knowing that his wife wanted to wear a wedding dress once, he decided to hold a silver wedding. “Even if I can’t remember anything later, I still hope she remembers me,” the husband said.

Shui Ge planned everything. He insists his wife deserves a chance and enjoy a memorable wedding.

Before entering the official ceremony, the host reminded Thuy Ca to write down the words he wanted to say on paper, to avoid forgetting, but he refused. The man said that everything he wanted to say was clearly remembered in his head. However, when he stood in front of his wife, he could not speak, only hugged her and cried.

“No matter how threatened by illness, believe in my love. We have been together for 25 years and many more years to come,” Thuy Ca said.

Their love story and silver wedding were later made into a documentary by Tianjin TV station, which was recently broadcast. In this movie, Thuy Ca shared, “Just looking at the photo of her radiant happy face as she entered the aisle, I told myself I would do everything to bring that moment back again and again. “.

Currently, Cathleen’s condition has many bad changes. However, she is always accompanied by her husband. In order for his wife not to forget himself, Thuy Ca kisses his wife every day and says “I love you!”.

“The two will go together to the end of the road and nothing can separate us,” Thuy Ca said.