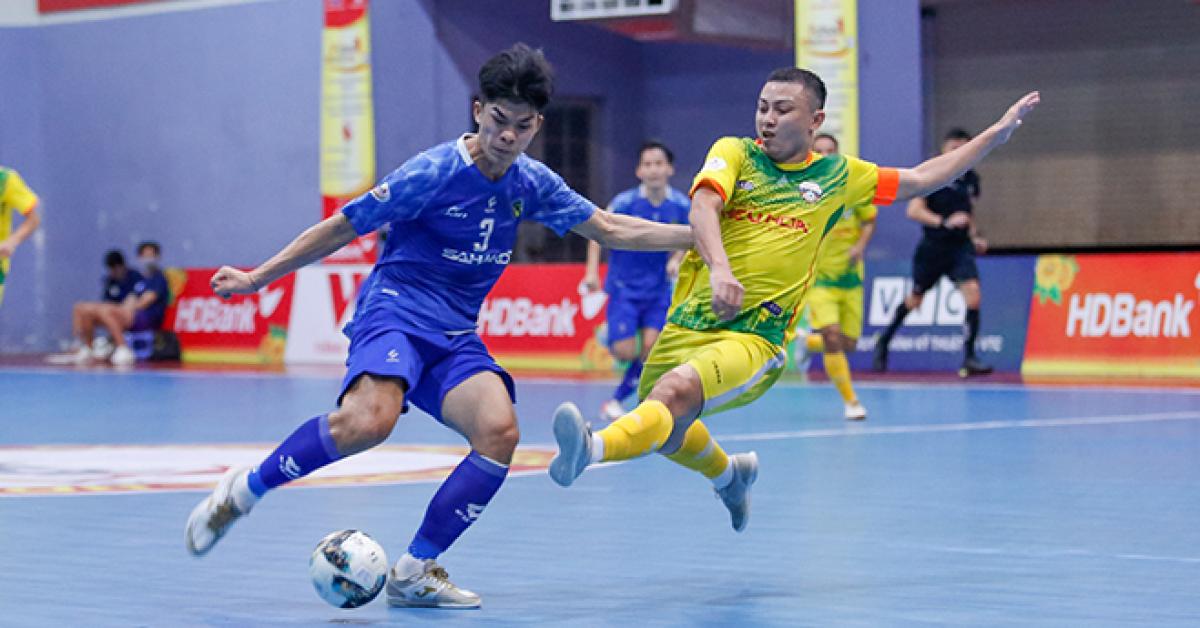 After many adjustments to the game plan due to the impact of the COVID-19 epidemic, the second leg of the HDBank futsal tournament of the National Championship 2021 opened yesterday (November 15) at Thai Son Nam Gymnasium (District 8, Ho Chi Minh City). Ho Chi Minh City).

Despite having to compete in the absence of spectators to ensure the prevention of the epidemic, the first 5 matches of the second leg took place full of excitement. Especially, there are three matches between the three teams that are racing for the championship, namely Sahako, Thai Son Nam and Zetbit Saigon.

Efforts of the organizer

The great performance of the Vietnamese futsal team at the 2020 futsal World Cup in Lithuania in September made fans eagerly await the return of the 2021 HDBank National Futsal Championship. Because simply, people want See how the Vietnamese futsal players who made the 4th place team in the Russian world sweat to win 3-2 in the round of 16 of the 2020 futsal World Cup team will play in the domestic tournament.

But from the perspective of organizing the tournament, it is not simple. The outbreak of COVID-19 has forced the organizers to constantly adjust the organization plan as well as change the venue to help the tournament return to normal soon.

From the venue in Can Tho, the second leg is expected to be transferred to Da Lat (Lam Dong) before closing at Thai Son Nam Gymnasium (District 8, Ho Chi Minh City) to facilitate the movement of teams as well as ease. easily control the disease.

But the most difficult decision of the organizers was to organize the return leg in the absence of an audience. Because people in Ho Chi Minh City are quite fond of futsal. Not to mention, the attraction from the success of the Vietnamese futsal team at the 2020 World Cup is huge, making everyone wait.

However, for the health of the community, the organizers chose to kick without an audience to ensure that the futsal ball can roll safely in Ho Chi Minh City. Instead, the matches will be televised more live for fans to watch.

Not being able to go to the field to watch the second leg matches directly is a pity for the fans, the organizers and the 10 participating teams. But clearly, the fact that the tournament can return not only makes sense in terms of sports but also for society with the message “Safe community, futsal is back”.

The playground is getting more and more attractive

Under the companionship of HDBank over the past 5 years, the HDBank National Championship futsal tournament and the National Cup HDBank futsal tournament have become more and more professional, competitive, and attracted more spectators to the field.

It is the high-quality matches in these two tournaments that have contributed significantly to the success of Vietnamese futsal in two consecutive rounds of reaching the round of 16 at the 2016 and 2020 World Cups. Because the players are scrutinized. professional development every year. While the coach also gradually matured after many years of studying or directly confronting foreign coaches at Thai Son Nam Club. The COVID-19 epidemic caused the 2021 HDBank futsal tournament to be disturbed a lot. But the attractive competition remains intact between the championship racing teams.

At the end of the first leg, Sahako is the champion with 23 points after 9 matches; 1 point more than the defending champion Thai Son Nam and Zetbit Saigon. And when the second leg returned on November 15, all three of these teams won all to continue chasing each other in the race to the championship. Sahako beat Hieu Hoa Da Nang 1-0, Thai Son Nam beat Thai Son Bac 3-0 and Zetbit Saigon beat Quang Nam 5-1.

Last season, Sahako also continuously led the tournament but ended up at the decisive moment, so he will be much more careful in this year’s tournament. Meanwhile, Thai Son Nam Club with many national players in the squad and head coach Pham Minh Giang is still a strong candidate for the championship. But it would be remiss to ignore Zetbit Saigon, a team that is heavily invested in this season to be able to create a surprise. At the last futsal World Cup 2020, coach Pham Minh Giang and assistant Nguyen Tuan Anh brought the Vietnamese futsal team to the top. In particular, assistant Nguyen Tuan Anh was the one who directly led the army in the 2-3 defeat against Russia in the round of 16 after coach Pham Minh Giang was suddenly positive for COVID-19. But the two will have to face each other “one to one” in the second leg of the HDBank futsal national championship 2021 when Thai Son Nam and Sahako are each other’s biggest rivals for the championship.

Just heard it was interesting. So, despite the worries due to the impact of the COVID-19 epidemic, the second leg of the 2021 season has only just begun, signaling great success!

According to Bao Vy (Vietnamese people).